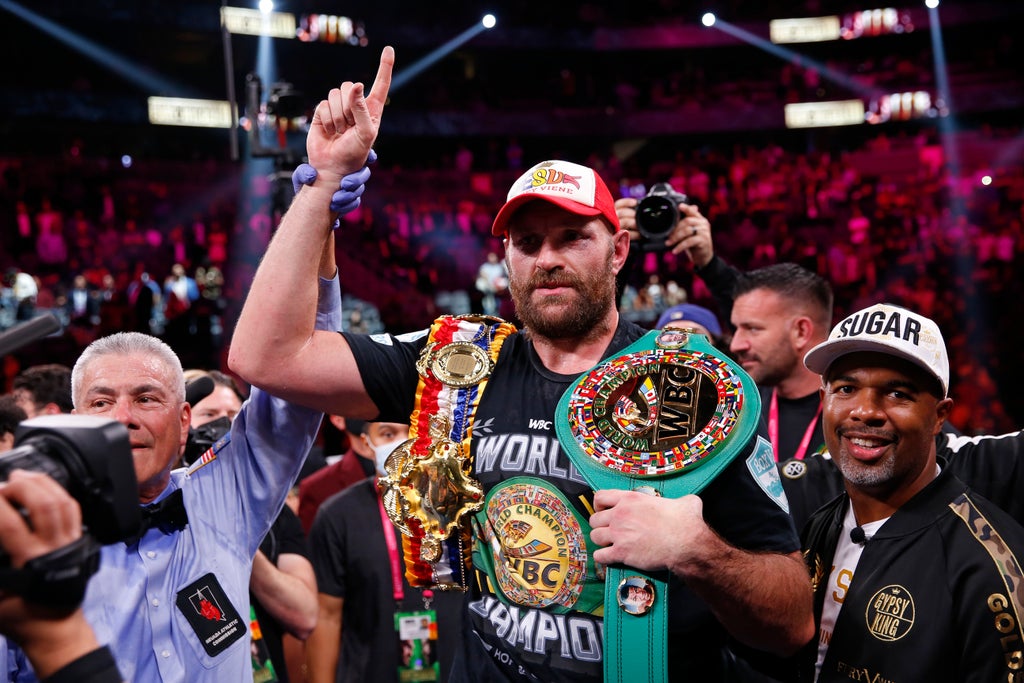 Tyson Fury remains WBC heavyweight champion after coming out on top in an all-time classic against Deontay Wilder at the T-Mobile Arena in Las Vegas.

Fury knocked down the gallant Wilder on three occasions to gain an 11th round knockout victory but had to earlier climb off the canvas twice in a pulsating fight.

Here, the PA news agency surveys the scene in boxing’s blue-riband division, with Fury declaring himself the best heavyweight of his era in the immediate aftermath of one of his finest wins.

There are still one or two challenges out there so his claim could be contested in some quarters. But having ended the reign of Wladimir Klitschko all those years ago and got the better of the hardest hitting heavyweight in modern times in two of three fights – many would argue all three – the 33-year-old Fury has a right to be bullish. This was not his most accomplished performance but his participation in a fight featuring five knockdowns smashes the myth he is only preoccupied on defence and ought to earn him an army of new fans.

Fury’s win was all the more impressive given a chaotic build-up to this fight, with the Briton catching Covid-19 to scupper a July date while his new-born daughter spent several days in an intensive care unit in August. It is little wonder that Fury on Saturday night had zero interest in discussing who is next on the agenda as he said: “I’ve just earned a well-earned break from everything. Before I start thinking about fighting other men, I’m going to bask in this victory because this was one of my greatest wins.” Once he is ready to get back to business, the obvious choice is a showdown against Anthony Joshua’s conqueror Oleksandr Usyk the WBA, IBF and WBO champion.

How likely is that to happen?

Not until at least next summer. The WBC said last week whoever prevailed in this trilogy bout had 30 days to negotiate an undisputed fight against Usyk. But Eddie Hearn revealed hours before Fury-Wilder III that Joshua had invoked his rematch clause and will likely take on the Ukrainian again next March. That means the WBC will almost certainly order Fury to face whoever prevails between Dillian Whyte and Otto Wallin later this month.

Fury admitted he was “wounded” by Joshua’s unanimous decision loss to Usyk three weeks ago and cheekily made an offer to train his domestic rival for the return bout. There is still an appetite for Fury to take on Joshua, albeit it will be diminished if Joshua cannot avenge his latest setback. A contest against Whyte, who has been waiting several years for a world title shot, would at least represent a welcome homecoming for Fury, with the 33-year-old indicating a desire to fight again in the UK after five successive clashes in the United States.

What is Wilder’s next move?

Who knows? The 35-year-old cast off the stink of his previous meeting with Fury 20 months ago, when he compounded his defeat by blaming the weight of his ringwalk costume draining his legs to the fanciful claim Fury had loaded gloves. This was a performance of heart and courage from Wilder, who at 238lbs was the heaviest he had ever weighed for a fight but still nearly 40lbs lighter than Fury. Anyone who was watching on Saturday night would surely relish a fourth instalment but Fury has clearly established he is the better fighter, so there is nothing left to prove.

Is retirement an option – for either fighter?

Fury would not rule anything out post-fight but it seems unlikely when there is at least one other fighter with a justifiable claim to his hegemony in Usyk. Assuming they do fight, Fury would have significant physical advantages. But the former undisputed world cruiserweight champion showed that was of no consequence against Joshua, albeit amore limited boxer than Fury. As for Wilder, it is worth remembering fights such as Saturday can shorten careers significantly. Despite their bravado, neither fighter will want to be involved in a fight like that in a hurry.