In his 11th game as an NFL cornerback, Patrick Surtain II, a 21-year-old rookie for the Denver Broncos, had two interceptions, five tackles and two passes defensed to lead his team to a 28-13 victory over the Los Angeles Chargers. The highlight of Surtain’s performance in the Nov. 28 game at Denver’s Empower Field at Mile High was a 70-yard pick-six that helped earn him AFC Defensive Player of the Week.

To prepare for the game, Surtain studied film and followed the guidance of his position coach and defensive coordinator, but he had another voice in his head as he took the field that afternoon against the Chargers. His father, Patrick Surtain Sr., had promised his son that he would have some big-play opportunities against a Chargers offense led by second-year quarterback Justin Herbert.

“Teams were throwing at me and my dad felt like a big game was coming my way because we knew Herbert was going to try to win the game with his arm,” Surtain told The Undefeated. “So he was just really proud of me for taking advantage of those opportunities.”

Surtain Sr., a three-time Pro Bowler who had stints with the Miami Dolphins and Kansas City Chiefs during his 11-year NFL career, has been coaching his son on the intricacies of the cornerback position for most of his life.

“When Pat was 8 years old, I could tell that later on he was going to be a cornerback because he started to outgrow the running back position,” Surtain Sr. said. “He had the perfect body and athleticism for a cornerback. The way he could run and track the ball and just his natural ball skills and physicality made him a natural for the position.”

Surtain Sr. was his son’s head coach at American Heritage School in Plantation, Florida, where Surtain was one of six players from his 2018 graduating class to get selected in the 2021 NFL draft. After an All-American career at Alabama, Surtain was taken ninth overall in the first round. For most weekends this fall after his own games at American Heritage, where he has been the head coach since 2016, Surtain Sr. raced to an airport to go see his son’s games. 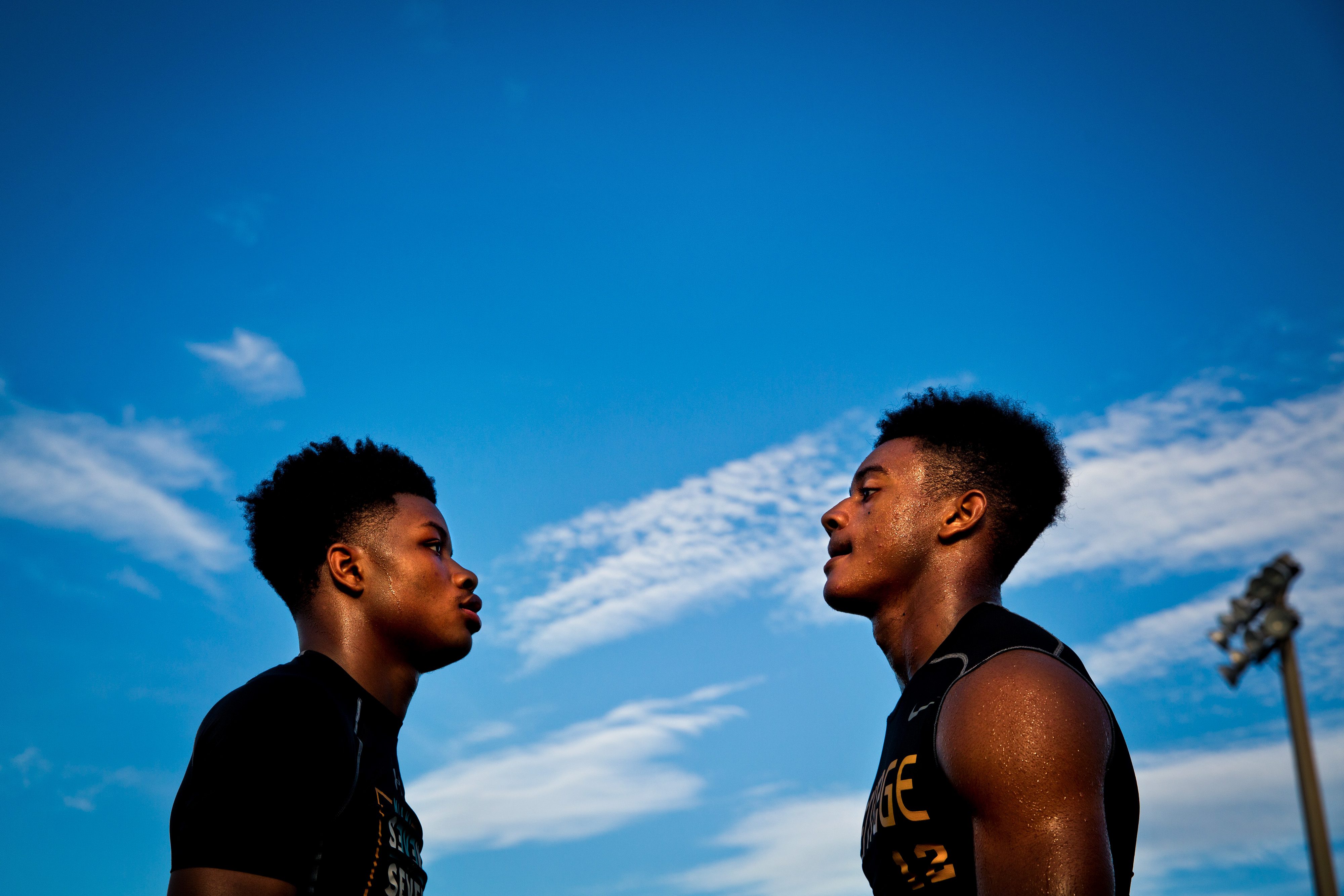 Cornerback High: Florida school has the two top recruits in the nationRead now

To fully understand this father-son bond is to also understand the craft and function of the cornerback position.

“We are the hunted out there,” Surtain Sr. said. “We have to cover some of the best athletes in the world going backwards.”

Surtain Sr. has long stopped trying to formally coach his son, calling himself now mostly a fan and a father, but it’s his natural instinct to watch every game with the eye of a cornerback.

“After the games, my dad tells me what I did well and what I did wrong so that I can learn and grow from it,” Surtain said. “It’s always good to listen to someone who played in the league for 11 years at a high and consistent level.”

Surtain Sr. studies other cornerbacks but mainly he focuses on his son. When Surtain steps on the field and lines up across a wide receiver, Surtain Sr. does an appraisal of the offensive formation and the situation. Then he looks at his son. It’s a surgical stare. Drawing from his own playing experience, he often knows where the play is going and Surtain’s assignment. Every conceivable tendency of the quarterback and the route combinations used in the offensive scheme have been passed from father to son.

“I can’t play for him but hopefully I can give him some pointers that will help him,” Surtain Sr. said. “I think it’s more important to be cerebral than a physical being in this game.”

At 6-feet-2, 203 pounds with 4.4 speed in the 40-yard dash, Surtain is one of the most physically gifted players at his position in the NFL. His decision to concentrate on cornerback in his early teens now seems less tied to a particular moment than the natural progression of his technique and command of the position. As a high school freshman, he shut down highly recruited wide receivers at an LSU football camp.

Yet it takes more than physical toughness and ability to thrive as an NFL cornerback.

“You’re reacting off of top-level wide receivers, not knowing what is going to happen,” Surtain said. “So your technique has to be flawless. You have to be on top of film study. The cornerback fraternity is so important because once you master this position, you can master anything. Knowing that you have guys around you who are good at the position is like a fraternity forever. People expect to see good receiver play, but you rarely see great cornerback play because of its difficulty.”

Like his father, Surtain is a consummate student of the habits and best practices of the position. He watches film of other cornerbacks: how they perform in zone and man-to-man coverage and how they read and react to the movements of wide receivers and quarterbacks. His success on the football field is the culmination of all the drills that his dad first put him through as a kid. Drills that were passed down to his dad from other skilled craftsmen of the position.

“Dad eased me through ladder and footwork drills,” Surtain said. “Then once I got accustomed to those, he added more to elevate my game. So the more and more I grew at the position, the more complex the drills became.”

After games, Surtain will often stop cornerbacks from opposing teams to talk shop.

“People that also play your position will respect you, so I just think being able to talk to those certain great players is something that brings confidence around you,” he said.

The evolution of the passing game at all levels of football has birthed an entire industry dedicated to developing the next Surtain and Trevon Diggs, the Dallas Cowboys cornerback who played with Surtain at Alabama.

Clay Mack, 49, runs a Dallas-based skills academy that trains defensive backs from Pop Warner to the NFL. Mack, a former Mississippi State cornerback, is putting 9- and 10-year-olds through many of the same drills as he does his high school, college and pro clients.

Mack worked with Surtain and Diggs when they were both at Alabama. For him, great cornerback play allows defensive coaches to exhaust different aspects of their scheme. For example, a defense has a lot of scheme flexibility if a cornerback can defend a great receiver man-to-man and free a safety to come up for run support.

“You don’t want your corners to be a liability,” said Mack, who has worked with more than 75 NFL players, including Jamal Adams, Marshon Lattimore and Jeff Okudah. “You want them to be assets. So that’s why the training is so prevalent now.”

Surtain is the kind of rangy cornerback who can play out on an island in man coverage, compete for 50-50 balls with tall receivers and come up to support run defense. He’s bigger and faster than his dad, but they share similar approaches to the game.

“I was more of a banger who played both inside and outside,” said Surtain Sr. “Pat is a smooth operator who goes about his business his way. But our playing styles are very similar because of the technical aspect. I preach to him all the time, technique, technique, technique. If you have that, it will carry you at the end of the day.”

With two games left in the regular season, Surtain has four interceptions, which is best in the NFL amongst rookies. Defensive Rookie of the Year may be a long shot for Surtain with Cowboys linebacker Micah Parsons in the mix, but a Pro Bowl selection at the end of the season could be on the horizon.

Surtain is simply trying to keep his focus on the fundamentals that were instilled in him by his father and got him to the NFL. “Dad,” Surtain said, “always says be consistent, trust your technique, be physical, fly around and have fun.”