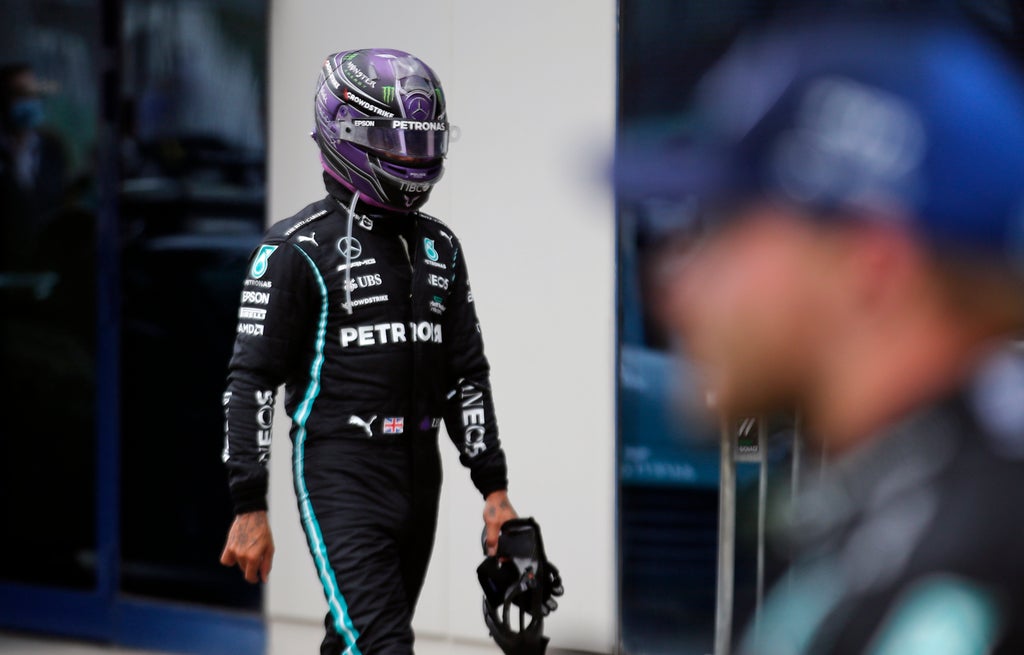 The world champion dropped from third to fifth after he was called in for new tyres against his wishes.

Here, the PA news agency looks at the key radio flashpoints between Hamilton and his race engineer, Peter Bonnington.

After leader Valtteri Bottas and Hamilton’s rival Max Verstappen stopped for new intermediate tyres, Mercedes wanted to call Hamilton in on lap 42 of 58.

Bonnington: “New inters are the way to go, we are under threat.”

Hamilton: “It feels like we should stay out, man.”

Bonnington: “We will stay out one more lap to give us a bit more thinking time.”

Hamilton’s Mercedes pit crew then retreated to the garage, with the Briton in fourth.

Hamilton: “Will these tyres last to the end?

Bonnington: “We are debating if these will last until the dry (tyres).”

Hamilton is asked for his opinion on the state of his rubber. At this stage, only Hamilton, Ferrari’s Charles Leclerc and Alpine’s Esteban Ocon have not stopped for new intermediates.

Bonnington: “OK, Lewis, could you update us on the tyres?”

Hamilton: “I am sliding around, but it is OK.”

On lap 47, Bottas passes Leclerc for the lead and the Ferrari driver stops. Hamilton is promoted to third. But on lap 50, Mercedes call him in.

Bonnington: “OK, Lewis, so we think we should box this lap.”

Hamilton drops behind Sergio Perez and Leclerc and emerges in fifth, ahead of AlphaTauri’s Pierre Gasly.

Bonnington: “It looked like we were going to lose position anyway.”

Hamilton: “What position am I in, man?”

Hamilton: “We shouldn’t have come in, man. We have got massive graining (on the new tyres). I TOLD YOU.”

Bonnington: “Copy, Lewis, we were losing time to Perez but we will chat about it later.”

After the chequered flag, Bonnington apologised to Hamilton.

Bonnington: “Ok, Lewis, so that is P5. Sorry about that. We will have to chat to you, talk you through the call.”

Hamilton did not respond.