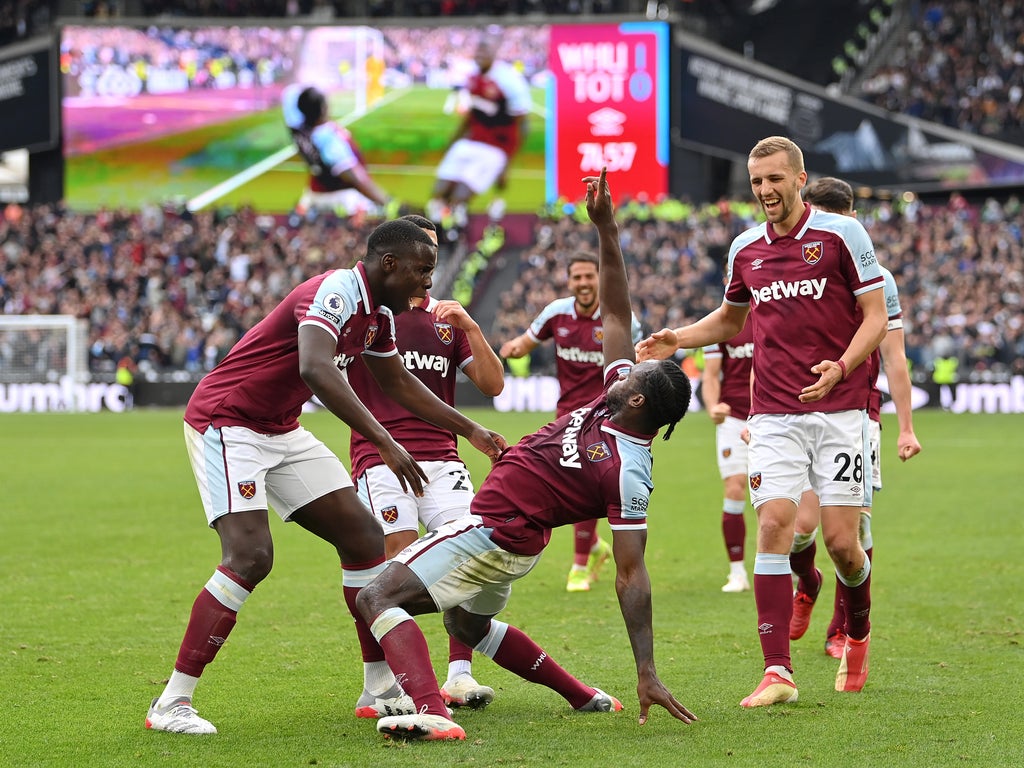 Michail Antonio continued to make Tottenham Hotspur his favourite opponent as he fired West Ham to a 1-0 win at the London Stadium.

The Hammers striker enjoys playing against Spurs more than any other club and bagged his sixth goal against their capital rivals late in the second half to earn a derby-day win.

Antonio got the better of his marker Harry Kane at a corner and poked home his seventh of the campaign in all competitions.

The win moves David Moyes’ side above Tottenham in the table and continues their solid start to the season.

It was a fourth London derby defeat of the season for Spurs, who have also lost to Crystal Palace, Chelsea and Arsenal and their battle for consistency is undermining any credible attempt to crack the top four.

They had chances in the first half but did not have a single shot on goal after the break.

Boss Nuno Espirito Santo clearly prioritised this game by leaving the entire starting XI at home while a second string travelled to Holland for a Europa Conference League game with Vitesse Arnhem.

Five of West Ham’s side were in Europa League action, but it was the hosts who started the brightest and forced Hugo Lloris into an early save as the Frenchman got down to keep out Pablo Fornals’ acrobatic effort.

Spurs thought they should have had a penalty as Kane played in Tanguy Ndombele, who was clattered by Kurt Zouma, with VAR ruling no offence had taken place.

That helped bring the visitors to life and they fashioned two chances in quick succession.

First Kane’s brilliant through-ball set Son Heung-min free, he squared to Lucas Moura, but the Brazilian got his feet in a muddle and could not keep his shot on the turn down.

Soon after Son was in on goal after Ndombele’s pass had played him in, but his first-time shot was easy for Lukasz Fabianski to save.

West Ham were still in the game and enjoyed a good spell, which saw Tomas Soucek fire a good chance at the far post over and Antonio curl an effort wide after he overpowered Cristian Romero.

But Spurs could have gone in at half-time in front, but for a fine save by Fabianski.

The visitors worked the ball well down the left and Sergio Reguilon’s cross was met at the far post by Kane but the Poland goalkeeper did well to tip the ball over.

Tottenham started the second half brightly as they regularly threatened down the flanks but there was no quality at the vital moment as Reguilon, Ndombele and Kane all wasted opportunities to tee up teammates.

West Ham were more streetwise than their opponents and the decisive moment came with 18 minutes remaining.

Reguilon was caught in possession by Fornals, whose shot was deflected over. And from the resulting corner, Antonio got in front of a statuesque Kane to poke home at the near post.

Spurs had nothing in the way of a response and West Ham held on to make it three wins in the last five against Spurs.