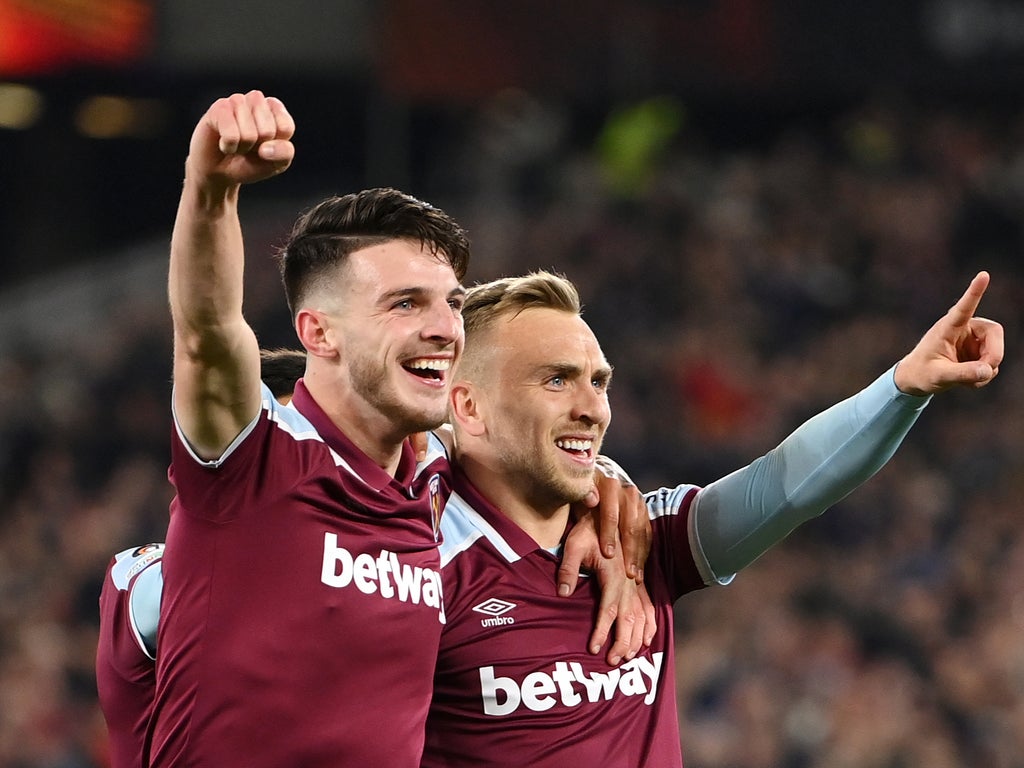 While West Ham’s last Europa League home game felt like a full-blown festival, Thursday evening’s fixture looked set to be the house party on a night when the best people had made other plans. Of course, there was the keen group gathered in the corner – on this occasion, Genk’s travelling supporters – undeterred by the outdated playlist and underwhelming snack choice, but the most engaging attendees had stayed home. That was, until they walked in the door just in time to inject life into the party and rescue the evening.

For just minutes before West Ham’s group-stage hosting of Belgian side Genk, the London Stadium filled out, showing that fans of the east London club are rightly refusing to take their presence in Europe for granted.

Nor are West Ham’s players, who evidenced that fact here with an impressive 3-0 win to retain top spot in Group H.

This entertaining affair began with an early Hammers onslaught to match their output in the opening stages of their home victory over Rapid Wien, in their last Europa League outing. Ahead of kick-off, David Moyes had made six changes to his starting XI from Sunday’s win at Everton, bringing in Alphonse Areola for a rare start in goal, behind an alternative centre-back pairing of Craig Dawson and Issa Diop. Manuel Lanzini and Nikola Vlasic came in for Said Benrahma and Pablo Fornals in midfield, with Andriy Yarmolenko deployed up top as Michail Antonio was rested.

The rotation certainly did not disrupt West Ham’s attacking cohesion in those early ventures forward, but it did see the hosts undone on their left flank before long.

Junya Ito was slipped through on the wing on nine minutes, but the Japan international was deemed narrowly offside when he cut back the cross that resulted in Theo Bongonda diving to head a rebound into the home team’s net.

Moyes’s side responded with further forays into the final third, Vlasic failing to sufficiently curve a shot past Genk goalkeeper Maarten Vandevoordt from a tight angle, before Tomas Soucek produced the next chance from a corner. The midfielder’s header forced Vandevoordt into a solid save, Soucek threatening to undo the plastic surgery he received this week following a stamp to the face by Everton’s Salomon Rondon.

Next, it was Jarrod Bowen who sliced at the cold east London air instead of the ball, wasting a clear opportunity when just six yards out from the visitors’ goal.

Genk rallied as the half progressed, however, with the vibrant Ito continuing to test Aaron Cresswell’s sharpness at left-back. It was from the opposite side, though, that the away team conjured their next clear-cut chance, with defender Gerardo Arteaga digging out a cross for Paul Onuachu.

The striker leapt to head the ball over Areola, who had strayed into no-man’s land, but his effort dropped agonisingly wide of the West Ham goal.

The match’s ebb and flow meant it was the home side who had the next turn to press for a goal, and it proved a timely turnover of momentum.

In the final moments of the half, Cresswell looked to defy any doubts around his freshness as he skimmed a low cross into Bowen, who this time managed to make contact with the ball – barely – to flick it goalwards. Vandevoordt got down well to prevent a West Ham opener, but it would come in added time.

A Cresswell corner reached Craig Dawson, whose header – or shouldered attempt – looped over Genk captain Bryan Heynen on the goal line, giving West Ham a 1-0 lead at the break.

The pattern of the game continued into the second half, with the teams trading half-chances, but West Ham would double their advantage shortly before the hour mark, with Cresswell yet again providing a dangerous delivery.

This time, the defender whipped in a free-kick from the left flank, picking out Diop. The Frenchman placed a header past Vandevoordt and, in doing so, planted the seeds for a third goal.

Because just seconds later, Genk ceded possession on the halfway line, allowing Bowen to burst forward, cut inside and fire off a low shot. Vandevoordt on this occasion let himself down, too easily beaten at his near post as the hosts moved into a 3-0 lead.

Moyes waited the best part of 10 minutes to ensure his players avoided complacency amid their comfortable advantage, before withdrawing captain Declan Rice and standout performer Cresswell. The former received huge applause as he was replaced by Mark Noble, while the latter made way for Ryan Fredericks.

The remainder of the half passed by largely without incident for the Hammers, with more substitutions coming in the final 10 minutes as Bowen and Vlasic made way for Benrahma and Fornals. There was even time for a cameo by 19-year-old Daniel Chesters and the midfielder’s debut was greeted by a resounding ovation.

Just three matches into their first ever Europa League campaign, West Ham are exhibiting more examples of mature game management with each outing. It was on display again here as Moyes’s men remained top of their group with another convincing win, and it will be crucial if the Hammers make it into the knockout rounds.

With nine points from three group games, a place in the next stage of this competition seems likely, but West Ham’s players and fans are not taking it for granted.

That was clear on Thursday evening, as a muted house party at London Stadium turned into another night to remember.