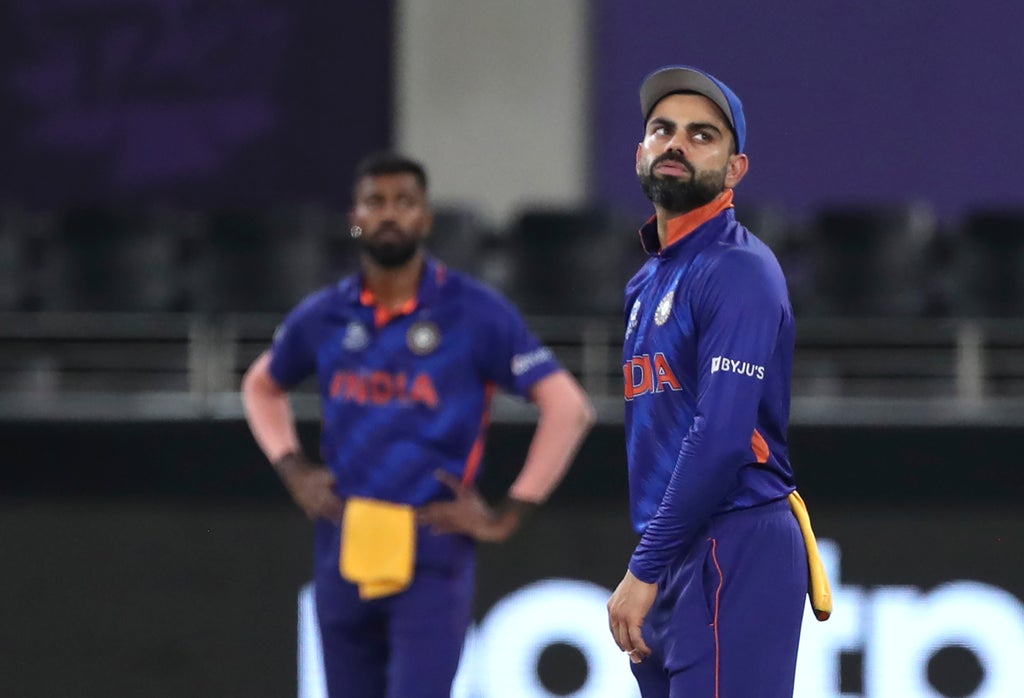 Virat Kohli believes India were not brave enough against New Zealand after another heavy defeat left the pre-tournament favourites’ hopes of a T20 World Cup semi-final spot on a knife edge.

India suffered a 10-wicket thrashing against Pakistan last weekend, the first time they had been beaten by their arch rivals in a World Cup, and matters worsened on Sunday after losing by eight wickets to New Zealand in Dubai.

Only Scotland sit below Kohli’s side in their Super 12 group, with India’s hopes of progression to the knockout stages not only resting on them winning their remaining games but also relying on results going in their favour.

Their miserly total of 110 for seven after being asked to bat first was overhauled with 33 balls to spare by the Black Caps, courtesy of 49 from 35 balls by Daryl Mitchell while Kiwi captain Kane Williamson was unbeaten on 33.

A chastened Kohli, who will stand down as India T20 captain at the end of the tournament, said at the presentation ceremony: “I thought we were not brave enough with bat or ball.

“New Zealand had better intensity and body language and put us under pressure from the first ball onwards. When you play for the Indian cricket team you have a lot of expectations – not just from fans, but players as well.

“There’s always going to be more pressure with our games and we’ve embraced it over the years. Everyone who plays for India has to embrace it.

“And when you cope together as a team you overcome it and we haven’t done it these two games. Just because you’re the Indian team and there are expectations doesn’t mean you start playing differently.”

Five of India’s top-seven reached double figures but no one reached 30 while the regular clatter of wickets undermined their hopes of setting a decent total as the chasing side won once again in Dubai.

Left-arm seamer Trent Boult was magnificent in taking three for 20 while leg-spinner Ish Sodhi claimed the wickets of instrumental India pair Rohit Sharma and Kohli as India lurched to 48 for four.

They only got to three figures in the final over, courtesy of some lusty blows from Ravindra Jadeja, who top-scored for India with 26 off 19 deliveries, but their total was never likely to be enough.

So it proved as New Zealand reached their target after 14.3 overs despite Jasprit Bumrah claiming two for 19 from his four-over quota, with the paceman reflecting afterwards that India’s players might be mentally fatigued.

India have had a bulging workload in recent months, starting with the World Test Championship final in June in England, where they also played a Test series before moving on to the conclusion of the Indian Premier League.

Many in the World Cup squad have had months away from their families, and complicating matters has been the necessity of being in controlled environments or more stringent bio-secure bubbles.

“Sometimes you need a break, you miss your family sometimes, you’ve been on the road for six months,” Bumrah said.

“All of that sometimes plays on the back of your mind but when you’re on the field you don’t think about all of those things, you don’t control a lot of things, how the scheduling goes or what tournament is played when.

“Staying in a bubble and away from your family for such a long period of time does play a role on the players’ minds but the BCCI (Board of Control for Cricket in India) also tried their best to make us feel comfortable.

“But this is the time we are living in right now, it’s a difficult time, there’s a pandemic going on.

“We try to adapt but sometimes bubble fatigue or mental fatigue creeps in and you’re doing the same thing again and again and again. It is the way it is and you can’t control a lot of it here.”