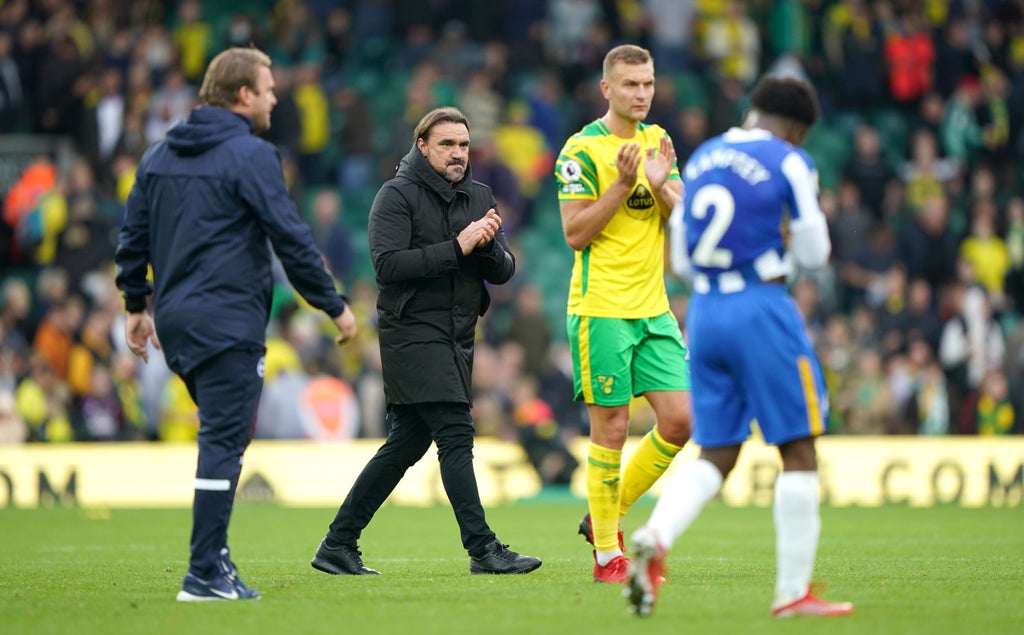 Daniel Farke admitted Norwich missed the chance to make a “big step” as they had to settle for a point at home to Brighton.

The struggling Canaries followed up their stalemate at Burnley before the international break with a second consecutive goalless draw.

But it could have been much better for the hosts, with Josh Sargent failing to make the most of an open goal in the 44th minute and Teemu Pukki poking wide when through one on one in the second half.

Farke, whose side remain bottom of the table with only two points, said: “We are playing football games to win and we are only happy when we win the games. We ticked many boxes today.

“We wanted to get off the mark at home, be unbeaten for two games and wanted to create more chances than we did in the Burnley game. These boxes were all ticked, so another small step in the right direction, but we definitely could have got the three points and made a big step, so for this we are not over the moon.”

Sargent was the chief culprit for the newly-promoted side, despite being a thorn in the Brighton defence all afternoon.

Having tested Robert Sanchez with a curler following a Cruyff turn early on, the American attacker squandered the key opportunity at the end of the first half when the Seagulls goalkeeper missed his clearance and the 21-year-old was left with the goal at his mercy.

A weak side-footed effort from 25 yards was on target but lacked power, with Shane Duffy able to clear, and it proved crucial as the hosts were unable to find the breakthrough.

“Josh is probably the most disappointed guy in the dressing room because he knows he should have scored in this situation,” Farke said.

“First of all I have to say Josh had an outstanding performance. His workload was unbelievable, he was able to keep the ball in the pockets and initiate so many good situations. He brought himself into really good positions and played excellently with Teemu.

“Yes, of course in the first half he knows he should score and I think he thought he was a bit too sure to score because he had time to take a touch. Also in the second half when he took the pass from Pukki and was one on one, he took a good touch but also could have scored. We should have scored at least one or two goals.”

Brighton were not at their best but extended their unbeaten run to five Premier League matches and also had chances to claim another victory.

Leandro Trossard saw an effort tipped on to the crossbar by Tim Krul in the 35th minute and Neal Maupay also wanted a first-half penalty after he went down under the faintest of touches from the keeper. Referee Peter Bankes instead awarded a goal-kick.

But Seagulls boss Potter said: “I thought maybe in the final third we struggled a little bit. We didn’t have the decision making, we lacked a bit of width and an ability to attack the back line.

“It was a tricky game, against a back five with Norwich fighting for points. and it was never going to be straightforward. We did some things well but didn’t play well enough to get the three points.”

On Maupay’s penalty appeal, Potter added: “If the referee on pitch doesn’t give it, it’s a tough one for VAR to overrule, but I haven’t seen it back closely.”