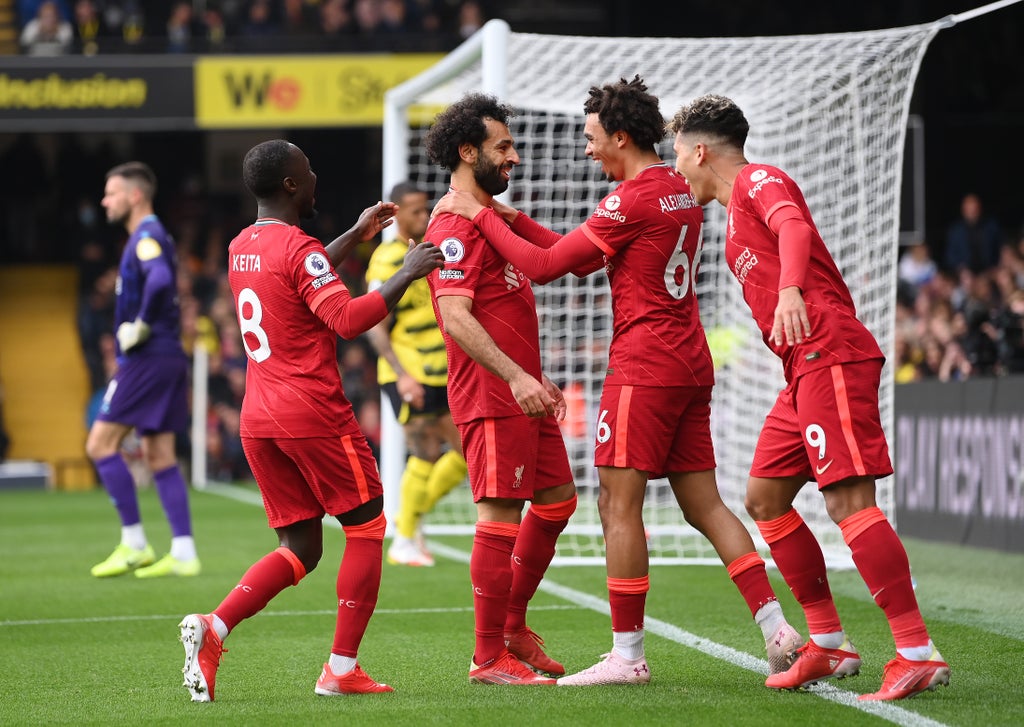 Mohamed Salah scored a second wonder goal in as many games and Roberto Firmino netted a hat-trick as Liverpool thrashed Watford in the Premier League in Claudio Ranieri’s first match in charge.

Salah dribbled past several Watford defenders before curling the ball into the far corner for Liverpool’s fourth, just a couple of weeks after his stunning strike against Manchester City at Anfield.

The match was over as a contest long before then, however, in what was a one-sided game at Vicarage Road. Sadio Mane scored Liverpool’s opener early on following Salah’s exquisite pass before Firmino doubled their lead before the break.

Firmino added his second shortly after half-time before Salah produced the moment of the match with his fine individual goal. Firmino completed his hat-trick in stoppage time when he tapped in Neco Williams’ cross at the back post.

Salah the best in the world on current form

Imagine scoring not one, but two goal of the season contenders in a single month? Mohamed Salah continued his stunning form for Liverpool with another goal that will be remembered around Anfield for some time. The control of his dribbling as he danced his way around Watford defenders and the finish that followed left little doubt that the Liverpool star is the best player in the Premier League right now, if not the world.

The Egyptian thrived in the space between Danny Rose and Adam Masina that was presented by Watford’s ineffective, lop-sided system and produced another quality display. Rose, in particular, was given a torrid time by Salah, who had the beating of the left-back at every opportunity. When Rose dropped off, Salah was able to knock the ball around him. When the former Tottenham defender got tight, Salah used his strength to roll him, which is what he was able to do for Liverpool’s opening goal.

Even then, it still took another moment of class from Salah to curl an inch-perfect pass with the outside of his left foot into Mane’s path. The direction and power on the pass was so exquisite that it told Mane how to finish it, with Salah also providing the instructions for a first-time finish into the bottom corner. The goal came after an opening 10-minute spell when Salah dominated his side of the pitch and threatened with a couple of early shots. Throughout the match, all of his touches, dribbles and passes were so sharp. Salah is at the top of his game right now, and his partnership with Mane looks as good as ever.

On paper and for a variety of reasons, Liverpool’s visit to Vicarage Road seemed to be a testing challenge for Jurgen Klopp’s side. Given the early kick-off time, immediately after an international break, without Brazil internationals Alisson and Fabinho, and up against a Watford side with the potential of a new manager bounce under Ranieri, the conditions for an upset were there.

Any of those doubts were put to bed within minutes of kick-off, however. Liverpool were sharp from the first whistle and pinned Watford inside their own half with their passing and possession. It perhaps helped that Watford looked to sit back with their back five, which gave Liverpool’s midfield time and space to control the match, although the trio of Jordan Henderson, James Milner and Naby Keita added the zip to their play which was necessary for their fast start, The determining factor, however, was the performance of Salah and the confidence Liverpool gained from his match-up against Rose.

The home fans at Vicarage Road, who had arrived hoping for their side to give Liverpool a go given the circumstances of the fixture, were taken out of the game and quickly became frustrated by the dominance and territory the visitors were enjoying.

If Watford were looking for a bounce under Ranieri, what they got was a flat line. A passive first-half performance and a puzzling system contributed to their downfall here, in what was their worst display of the season so far. A penny for Xisco Munoz’s thoughts, following his surprising dismissal at the start of the international break.

It is far too early to cast too many judgements on Ranieri’s plans given the quick turnaround following his appointment, but the early signs were not encouraging against Liverpool. aFrom a tactical perspective, a switch to a confusing back four-five hybrid was axed at the break, with Masina hooked following a woeful first-half display in which he played neither wing back nor left midfield.

You could understand there being a lack of cohesion, perhaps, but there was also a complete lack of spirit or fight from Watford, who meekly retreated into their own half and barely landed a punch. It took until the 55th minute for the hosts to force Liverpool’s stand-in goalkeeper Caoimhin Kelleher into a save, which brought iconic cheers from their frustrated fans.

It didn’t seem like Watford were in trouble a couple of weeks ago. But with a tough run of fixtures to come, it certainly feels like it now.

Liverpool are quietly negotiating a period of injury problems and James Milner has been central to that. After filling in at right back for Trent Alexander Arnold before the international break, Milner returned to central midfield against Watford, as Liverpool shuffled the pack following injuries to Curtis Jones and Thiago and the absence of Fabinho.

Milner produced an excellent performance in Liverpool’s midfield three and set up their second goal when he got around the side of Sadio Mane and squared the ball for Firmino to tap in.

Firmino’s brace also came at a good time following the injury to Diogo Jota and the forward has returned to form following his own spell on the sidelines last month. Kelleher, although he wasn’t tested, was a calming influence as he replaced the unavailable Alisson while Henderson seamlessly slotted into Fabinho’s position in front of the back four.

With a tough week ahead, this really couldn’t have gone much better for Liverpool. Three points felt safe as soon as Liverpool went a goal up, a position that was consolidated at half time and then all-but secured by the hour mark.

It allowed Jurgen Klopp to rest both Trent Alexander-Arnold, who looked good on his return from injury, and Andrew Robertson ahead of Tuesday’s trip to Atletico Madrid and Sunday’s clash against Manchester United.

Alisson and Fabinho will be available for both fixtures, and Liverpool are in good shape ahead of a crucial week in their season.