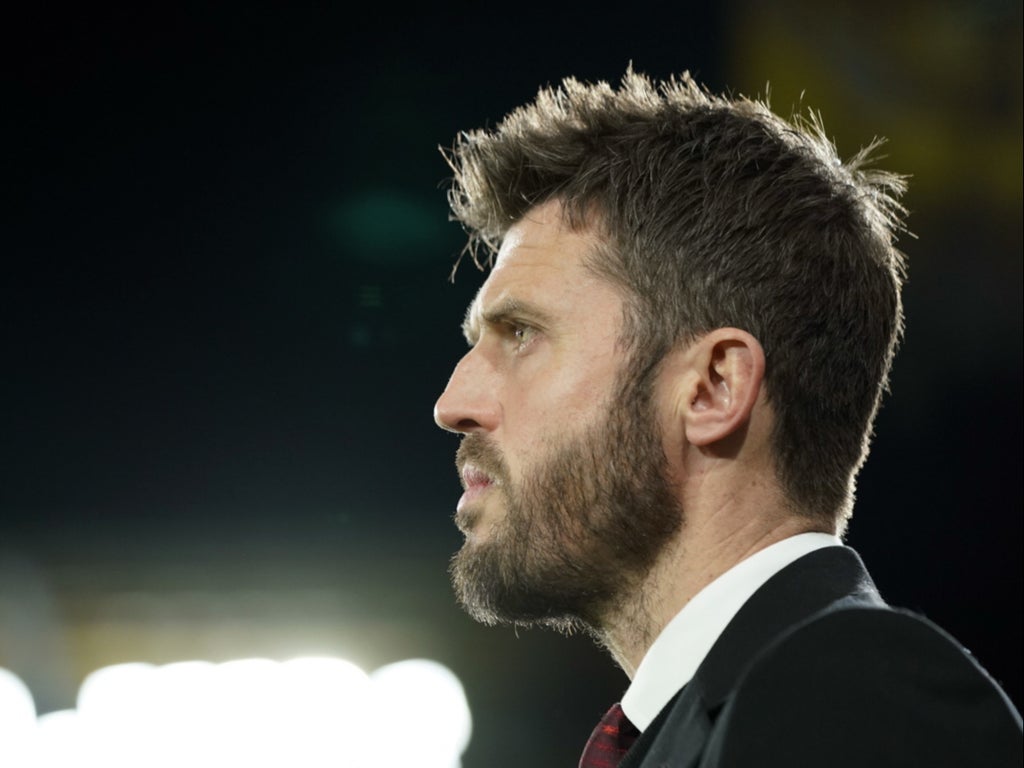 Who will be Manchester United’s new manager?

Follow all the action as Manchester United travel to Villarreal in a crucial Champions League fixture tonight.

After Ole Gunnar Solskjaer was finally sacked on Sunday, less than 24 hours after United’s dreadful 4-1 defeat at Watford, the club has been engulfed by uncertainty over who will take charge. Mauricio Pochettino continues to be linked with the permanent position, but it will be Michael Carrick who leads the team tonight as caretaker and, for all the disruption, United simply cannot afford another poor performance.

The club are currently tied with Villarreal at the top of Group F on seven points, and victory tonight will see Carrick’s interim reign begin with automatic qualification into the knockout stages. However, defeat could see Atalanta leapfrog United into second place with just one game remaining and heap yet more pressure on a beleaguered squad. “It’s like every game we go into,” Carrick said ahead of kick-off. “Whatever the recent form, whatever is happening around it, you’ve got to go into the game to try to win the game.” Follow all the action live below:

3 mins: Cristiano Ronaldo has started off on the left side with Anthony Martial playing through the centre as the number nine for Manchester United.

Yeremy Pino is dispossessed by Alex Telles who knocks the ball up to Martial. He drives towards the box and is taken out by Pino sprinting back to win the ball.

Kick off: Finally, more than five minutes later than scheduled, Donny van de Beek gets the ball rolling for the visitors.

Remember, victory for Man Utd will secure them a place in the knockout stages.

Paul Scholes has said Michael Carrick and his staff should not be at Manchester United following Ole Gunnar Solskjaer’s sacking as head coach.

“Arguably it’s more Kieran McKenna and Michael Carrick who’ve been preparing the team. Ole gave them that responsibility, so how that changes now I don’t know.

“I’d be almost embarrassed being the staff now, after what happened to Ole. I think they all should have gone.”

Read all that Scholes had to say:

Manchester United’s Champions League campaign so far has been full of drama, excitement and late goals. There’s a delay whilst the referee resolves a problem with one of his communication devices.

The players are out on the pitch, passing balls around to stay warm.

Here come the teams. This is Manchester United’s biggest Champions League game of the season, win and they’re into the last-16, lose and they’re on the verge of getting kicked out of the competition.

Which Manchester United will turn up? Can they earn a first victory for interim boss Michael Carrick? Lets find out, kick off is next…

Villarreal vs Man Utd: Manchester United’s Ole Gunnar Solskjaer mistake leaves them behind their rivals and back where they started

Still, nobody expected it to get as bad as that at Vicarage Road. Then again, that has been the story of the modern Manchester United, and particularly Solskjaer’s time. They have frequently been blindsided by developments, due to bad decisions.

Unai Emery’s Villarreal currently sit 12th in La Liga, but are unbeaten in their last three games. That defeat came on the 30th October when Valencia beat them 2-0 in the league.

They have drawn their previous two Champions League home games with Manchester United.

Cristiano Ronaldo has been influential in Manchester United’s Champions League campaign this season scoring in every game including three late goals to rescue United from losing positions.

Ronaldo scored five minutes into added time to give United a 2-1 victory at home against Villarreal on 29th September. Paco Alcácer had put the visitors in front in the 53rd minute at Old Trafford, Alex Telles levelling seven minutes later.

Ronaldo also scored late goals home (3-2) and away (2-2) against Atalanta on Matchdays 3 and 4 as United recovered from their 2-1 opening defeat at Young Boys.

Villarreal, who were held 2-2 at home by Atalanta in their opening fixture, have since beaten Young Boys 4-1 in Switzerland and 2-0 in Spain.

Villarreal vs Man Utd: Man Utd struggling on the road

Manchester United have only won seven of their last 24 away Champions League matches with six draws and 11 defeats. They are winless in their last four on the road (one draw, three losses) since a 2-1 win at Paris St-Germain in October 2020.