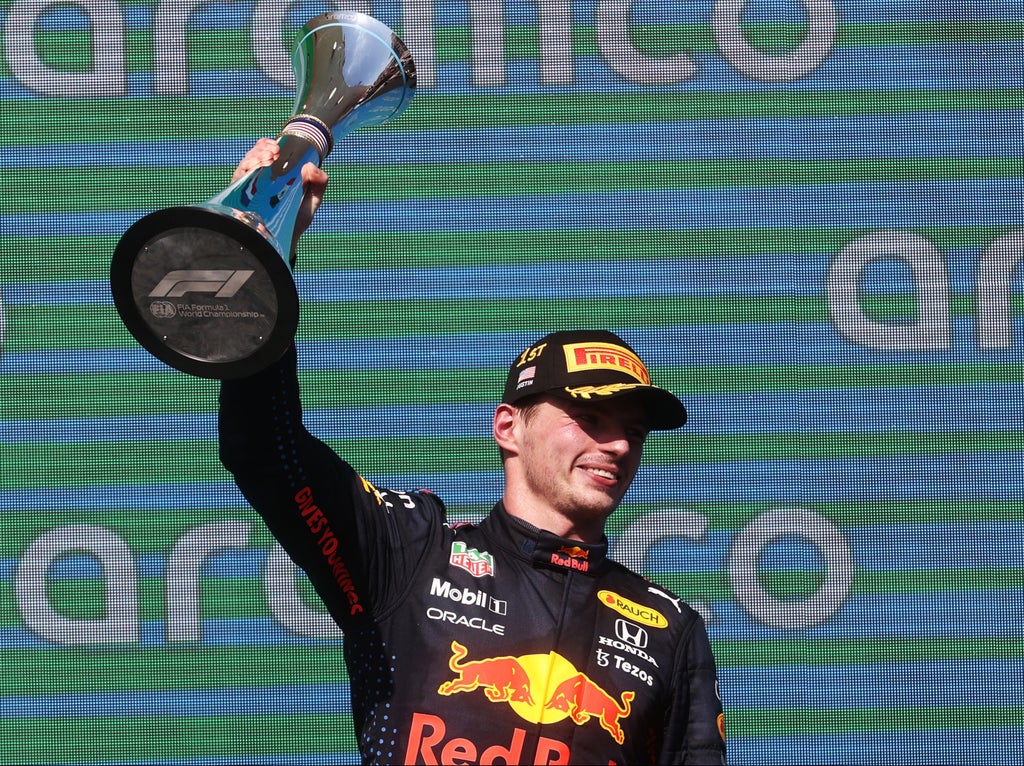 Lewis Hamilton’s dreams of a record-breaking eighth Formula 1 world championship were dealt a significant blow after he lost further ground in the title race to a triumphant Max Verstappen at the United States Grand Prix.

Hamilton, on fresher rubber than Verstappen, hustled his rival all the way to the line in a thrilling climax – but the Dutch driver held firm to claim his eighth win of the campaign.

Hamilton’s points difference to Verstappen has increased from six to 12, with only five rounds and 130 points available in this year’s ferocious title fight.

Under scorching blue skies, F1’s biggest crowd of the season created one of the best pre-race atmospheres of the year at the Circuit of the Americas, 15 miles south of downtown Austin.

And the 140,000 sets of eyes were firmly fixed on the charge to the first corner, with Verstappen lining up on pole and Hamilton second.

When the lights flicked to green, it was Hamilton who reacted fastest. The Briton was three thousandths of a second quicker than Verstappen, and his lightning reactions forced the Red Bull man to take action.

Verstappen instantly moved to his left, in an attempt to put the squeeze on Hamilton, who held the inside line for the left hander.

Hamilton placed his Mercedes on the apex of the bend before moving ahead of Verstappen, and leaving his title rival with little to no room. The Dutchman ran across the kerbs and Hamilton raced off into the lead. It was the perfect start for the defending champion.

By the end of the first lap, Hamilton was a second clear, but that proved as good as it was going to get for the British driver.

“He is quicker than me right now,” a concerned Hamilton reported to his team in the very early stages.

Moments later, Verstappen was on the radio, too, but displaying a more victorious tone.

“He’s sliding a lot and I have a lot more pace,” said the Red Bull racer. “I just wanted to tell you.”

Then, on lap 10, Red Bull called Verstappen in. The championship leader bolted on a new set of rubber and emerged in fifth, which promptly became fourth as he fought his way past Ricciardo, crucially without losing any time.

Hamilton reported that his tyres felt okay, and Mercedes left their man out. But Verstappen was flying, lighting up the time sheets with a series of fastest laps, with Hamilton now in no man’s land.

When Hamilton elected to stop Hamilton – three laps later than Verstappen – he was only 14 seconds up the road. And when he left the pit lane he was 6.5 seconds back.

Hamilton slowly niggled away at Verstappen’s lead, and by lap 26, he had halved the deficit to three seconds. On lap 29, Verstappen stopped for a second occasion and Hamilton set the fastest lap of the race.

Mercedes team principal Toto Wolff came on the radio with a rallying call.

“Lewis you are racing for the win,” he said. “Leave me to it, bro, thanks,” came his driver’s response.

With 19 laps left, Hamilton was 11.4 seconds ahead of Verstappen when he stopped for a second time. Hamilton, with eight-lap fresher rubber, returned to the track 8.5 seconds adrift of his rival.

In six laps, Hamilton took four seconds out of Verstappen’s lead and with 10 laps remaining he was just three adrift of his rival.

With seven to go the gap stood at two seconds and by the start of the final lap, Hamilton could smell the exhaust fumes from the back of Verstappen’s Honda engine.

But Verstappen displayed impressive composure under the most of intense circumstances to close out the win – crossing the line 1.333 sec ahead.

Hamilton said after the race: “Congratulations to Max, he did a great job.

“It was such a tough race. We got a good start and gave it everything but they had the upper hand this weekend.”

Reflecting on the bumper crowd, Hamilton added: “This is our acceptance into the US and what a place to be. I hope we have more races here and I hope the sport continues to grow.”

Verstappen was delighted to hold on for victory after seeing Hamilton put him under intense pressure at both the start and end of the race.

He said: “We lost out at the start and we had to try something else. I was not sure if it was going to work but the last laps were fun and I am super-happy to hang on.”