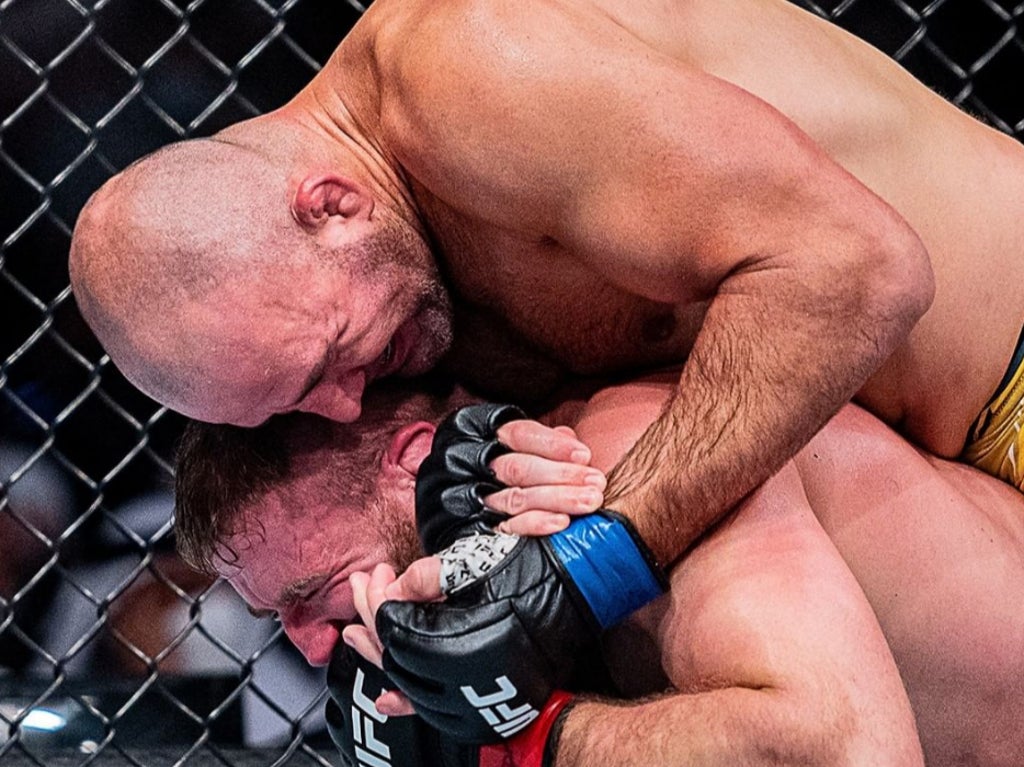 Glover Teixeira completed his fairytale run to the UFC light heavyweight title on Saturday night, submitting Jan Blachowicz in the main event of UFC 267 to become the second oldest champion in the company’s history.

Two days after turning 42 years old, Teixeira finished Blachowicz with a neck crank in the second round, capping off an enthralling card on ‘Fight Island’ in Abu Dhabi.

The Brazilian had previously challenged for the belt in 2014, when he was outpointed by Jon Jones, and his recent five-fight win streak seemed to represent a race against time to make one last run at the gold.

And Teixeira (33-7) produced a stunning display in the Etihad Arena to beat Blachowicz (28-9), taking down the champion early in the first round and controlling him, before rocking the 38-year-old with a left hook in Round 2 to set up the finish.

That finish saw Teixeira take down Blachowicz again, before easing into mount position, taking his opponent’s back and flattening him out. From there, the Brazilian locked in a neck crank that forced Blachowicz to tap out immediately.

As such, Teixeira extended his win streak to six, claiming a 33rd career victory in the process. The veteran’s triumph marked the 10th submission win of his career and – remarkably – his 28th finish overall.

A jubilant Teixeira said in his post-fight interview: “Twenty years, baby! What a career.

“I’m breaking the rules, 42 years old. I’m gonna keep breaking those rules. This [Octagon] is my house. I love this!

“Never give up on your dreams. [It doesn’t] matter what people say, don’t listen to them – they’re gonna put you down.

“Don’t listen to those negative people. Believe in yourself, keep going forward.”

Blachowicz, meanwhile, vowed to return in a fresh pursuit of the title, after saying: “Everything went wrong for me. I think I left my ‘legendary Polish power’ in the hotel room.”

Yan lost the undisputed championship to Aljamain Sterling in his last outing, an illegal knee seeing the Russian disqualified. The pair were set for a rematch on Saturday night, but a recent injury to Sterling led the Jamaican-American to withdraw.

Sandhagen (14-4) stepped in as a replacement following his controversial split-decision loss to former champion TJ Dillashaw in July, and the American again failed to convince the judges that he had done enough to have his hand raised.

Despite a fast start and strong showing overall, Sandhagen fell to a unanimous-decision defeat by Yan (16-2), who was a 49-46 winner in the eyes of all three judges.

Elsewhere on the card, rising star Khamzat Chimaev returned after a 13-month absence to secure his fourth stoppage win from as many UFC outings.

The Russian-born Swede, who had suffered badly from Covid-19 over the last year, submitted Li Jingliang in the first round of their contest, with the Chinaman passing out in a rear naked choke.

Since debuting in the UFC last summer, the undefeated Chimaev (10-0) had only absorbed one strike, and Jingliang was unable to alter that stunning statistic here.

The victory saw the Russian extend his win streak to nine fights, with Khabib in his corner to offer coaching advice and support – though Makhachev (21-1) needed little of either against New Zealand native Hooker (21-11).