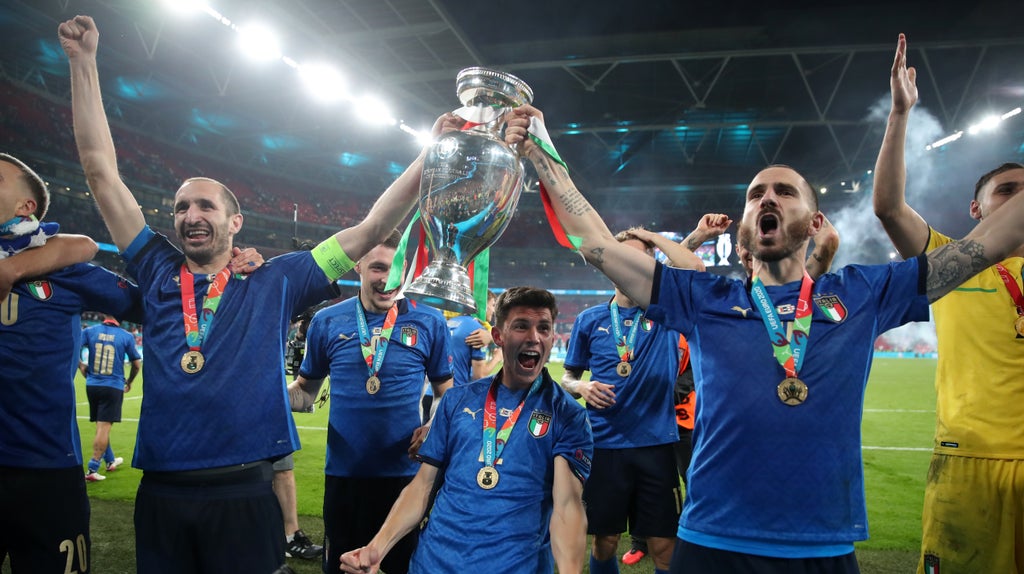 Italy face a semi-final rematch with Spain as they bid to follow up their Euro 2020 success by claiming more silverware this week.

Roberto Mancini’s stylish European champions, who are defending a 37-game unbeaten record, host Spain in the first of the Uefa Nations League last-four encounters at the San Siro on Wednesday.

The last meeting between the sides came at Wembley in July when, with a place in the Euros final at stake, Italy prevailed in a penalty shoot-out after a thrilling 1-1 draw.

Victory this time would set up a final date with Belgium or France but Mancini, whose side are also of top their World Cup qualifying group, is anticipating a tough clash.

“Spain were the team we struggled against most during Euro 2020,” the former Manchester City boss told uefa.com. “They are a good team with good players. It will be a good match.

After a slow start at Euro 2020, Spain were beginning to look a strong side by the end of the tournament in the summer but they were beaten by Sweden in a World Cup qualifier last month.

Manager Luis Enrique is confident his side can rouse themselves for the upcoming challenge.

Enrique said: “It was already an attractive proposition before the Euros took place – to play Italy in Italy in the final four.

“This is a competition that we would love to win. It will be a very interesting match, to see what kind of performance we are capable of producing in front of an Italian-majority crowd and against the reigning European champions.

“You don’t need any more motivation than that. I can’t wait for the game.”

The second last-four tie at Juventus’ Allianz Stadium on Thursday is a rematch of the 2018 World Cup semi-final in Russia.

On that occasion France came out on top and went on to win the tournament but Belgium have since risen to top spot in the world rankings.

“There is this rivalry and it’s maybe a bit heightened after the semi-final in Russia,” said France manager Didier Deschamps, whose side suffered a frustrating Euro 2020 exit to Switzerland at the last-16 stage.

“We don’t fear them but they have a solid shape and plenty of creative ability. Their attacking play is very effective and they are very efficient.”

Belgium striker Romelu Lukaku said: “I think now in the Nations League we must do really well so that we can peak at the next World Cup.”

The Nations League final takes place at the San Siro on Sunday with a third-place play-off in Turin on Saturday.