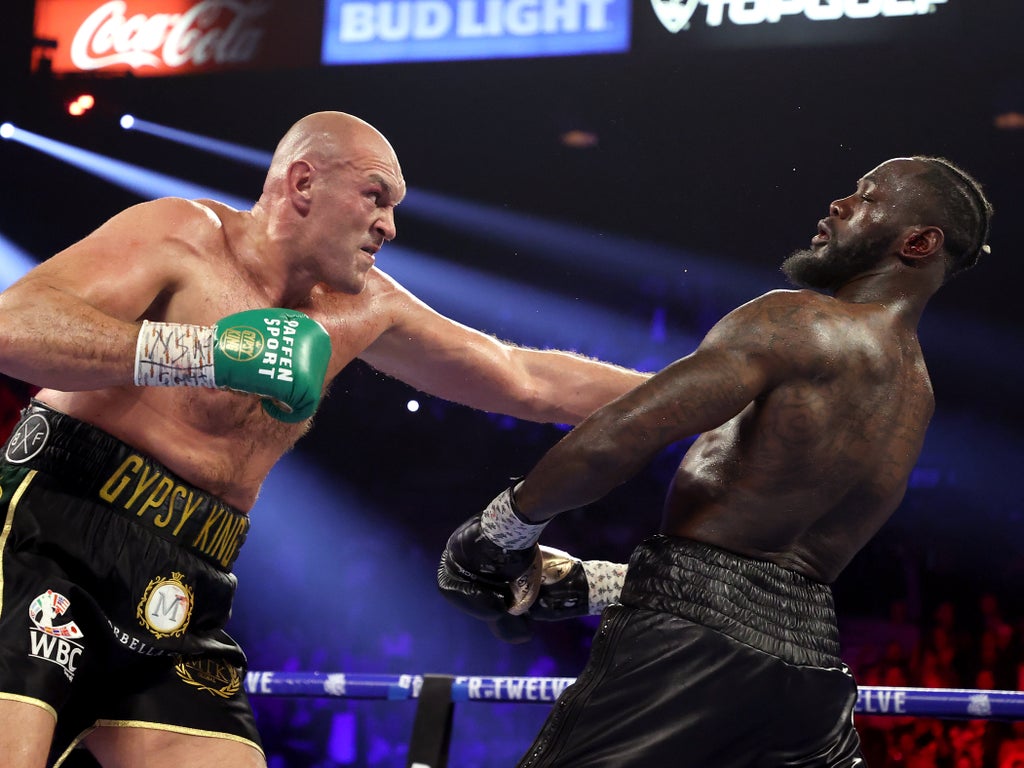 Welcome back to Las Vegas for heavyweight championship boxing on a Saturday night just off the strip. It’s been a long wait.

Tyson Fury left this greedy city in February 2020 when his fists hurt, stopped, dropped and broke Deontay Wilder in seven rounds. Fury left as the WBC champion, left to a planned glorious future of anticipation and fights; he has not fought since, a victim of both Covid restrictions and the virus itself.

Wilder has also been inactive since their fight, stuck in a permanent loop of utter lunacy since that night. Wilder has blamed the stars, the moon, a horseshoe, Jedi powers, a battery pack and the lyrics of a Patsy Cline classic for his annihilation in the MGM ring. Sadly, none of those excuses are my invention. He has sacked his main trainer and not once looked in a mirror and blamed himself for his first loss. And, more alarmingly, he has not once praised Fury.

They were meant to have fought last July and then this July; both fights collapsed and that is really the best that can be said about the delays, claims, reasons and tricky truths that swallow cancelled and postponed fights. They are gone – so is the fight with Anthony Joshua – and so, in a city that reinvents itself every couple of years, perhaps it is time to move on: Fury against Wilder III is an exceptional fight, a fight with plots and depth and severe storylines that have been disguised by a few foul-mouthed declarations.

First, let me paint the outline of the conflict, their third fight. In the summer of 2018, when Fury was fat and just back in boxing, a fight between Wilder and Joshua collapsed. A deal was done and dusted in just days for Fury to fight Wilder in Los Angeles in December 2018.

Fury was not ready, but he took the risk and won the praise of the trade. Lennox Lewis and Mike Tyson compared Fury to the fighters of old: brave men willing to step in at short notice. Wilder, meanwhile, had made seven defences of his WBC title and knocked out each of the men. In the first fight, which was excellent, Fury was brilliant and survived a sickening knockdown in the 12th and last round, which has been watched a zillion times. He somehow beat the count, defied all boxing logic and rose to his full 6ft 9in of fighting glory. Nobody could believe it, Wilder was crushed. Fury dubbed it the resurrection and it was certainly extraordinary.

The fight was scored a controversial draw. They went their separate ways and were pulled together for their rematch last February; it was shocking, Fury was brutal and Wilder was sent tumbling to the canvas twice before the mercy stoppage. Fury changed every single part of his boxing style to pull off the win and had also changed his training and corner team. He hired two men, Andy Lee and Sugar Hill Steward, both veterans of the Kronk gym in Detroit, and they promised to make him aggressive. They did, he was and Wilder was truly stunned. Gordon Ramsay, the chef, and John Fury, the fighter’s father, predicted the fight perfectly, but they were on their own. Wilder and his team had no idea how to deal with Fury marching forward, taking shots and letting his fists go. It was a revelation and, watching from the ring apron that night, it was quite scary. Fury really damaged Wilder.

That, as they say, was then.

Wilder invoked his right to a third fight, it was made and then Covid shut down the boxing game. In Las Vegas the lights went out and the casino doors were bolted closed.

Wilder has been in a constant state since the loss. His new trainer, Malik Scott, who was part of the team last year, has the fighter looking sharper, more mobile and thinking. Obviously, it is easy to look good hitting pads in a ring or shadow boxing in the surf.

Fury was ready for a fight last December that vanished and was in and out of Las Vegas a lot earlier this year. It has not been ideal and then, six weeks ago, he had a family emergency when his newborn daughter was rushed to Alder Hey hospital and placed in the intensive care unit. She is home now, healthy and growing. It was a grim time and Fury was bedside for the vigil. His father went over to Liverpool, ran with him, comforted him. Fury was premature at birth and John was told there was a chance his son would die. “I kept telling him, I’ve seen it all before with you – I told him, have faith, don’t give up,” John said.

The hospital stay delayed Fury’s arrival in Las Vegas; Wilder kept on punching away at hired men, Malik’s pads or the demons in his head. They will come together this week, the talking is over, the baiting will start and it will be lovely, make no mistake.

The city needs this fight and trilogies between good heavyweights are a rare and wonderful thing. There is talk here, in the tiny pockets of boxing folk that still gather in casinos to chat, about the delay, about Fury’s fitness, about Wilder’s mental state and equally bold talk that Fury will simply walk through him again.

It’s Las Vegas, a city of odds, heartbreak, joy and riches and the only venue on earth for this fight. The pair will meet and abuse each other a few times this week in scheduled events. It can be an indicator and it can just be fun. The bookies are circling, the action is real and the first bell will end the darkest of Covid days in this sprawling desert city. Saturday can’t come soon enough.