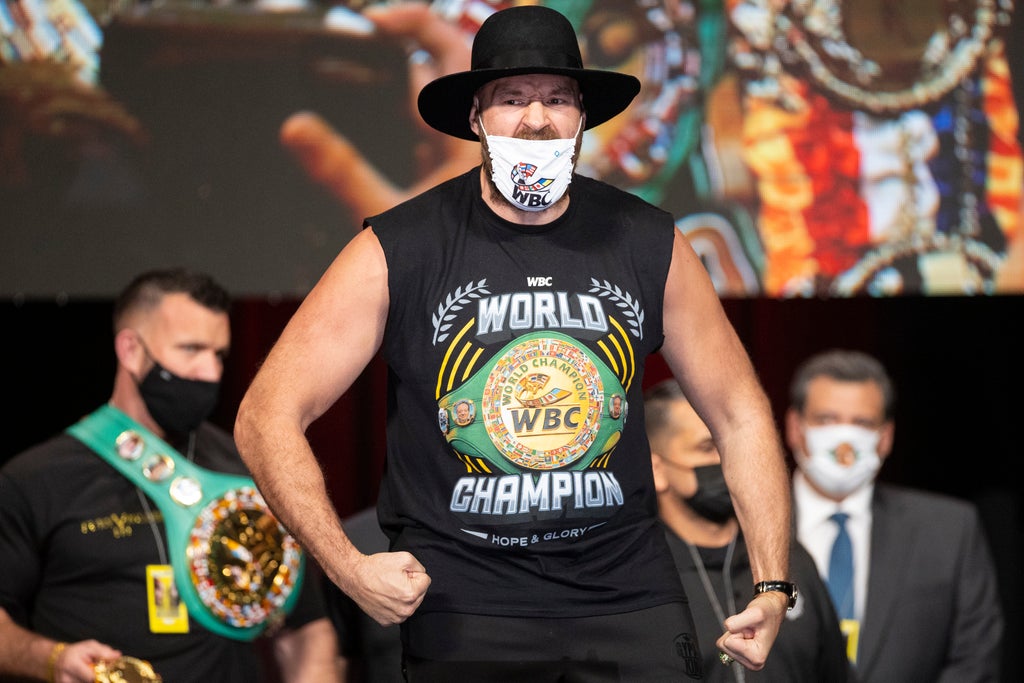 Tyson Fury weighed in nearly 40lbs heavier than Deontay Wilder ahead of their third fight in Las Vegas before vowing to send his rival home “butchered” on Saturday night.

Both competitors came in at the heaviest weights of their professional careers – although Fury elected to keep on tracksuit bottoms, a sleeveless t-shirt and a hat paying homage to WWE character The Undertaker when he tipped the scales at 19st 11lbs.

Fury, who will also have marginal height and reach advantages, is making the first defence of the WBC heavyweight title he won when he dethroned Wilder as champion 20 months ago in what was both combatants’ last bout.

Wilder took off his top as he came in at exactly 17st, seven pounds heavier than when he suffered the first loss of his 44-fight professional career in February last year. Fury is four pounds heavier from their last meeting.

A fired-up Fury said of the weights: “It means total obliteration of a dosser. Total annihilation. I’m going to put him in the Royal Infirmary after this fight, don’t worry about that. I will send him home butchered.”

While the 39lb weight difference for this weekend is substantial, it is actually the closest they have been in their trilogy, with Wilder more than 40lb lighter for their two previous encounters.

As anticipated there was no face-off, which is customary after weigh-ins, because tensions have between high between the fighters all week and, as if to illustrate the point, they taunted one another from a distance on-stage.

Wilder said: “The weight just came on, I wanted to look sexy and feel sexy. I taste sexy as well. I’m bench pressing a little over 350lbs, so there won’t be no rushing me and putting his weight on me and things like that.

“Calmness is the key to the storm. I know that when I’m not calm, my mind is cloudy and you make bad decisions. But when you’re calm you can weather the storm, you’re able to make great decisions.

“We have rejuvenated myself, reinvented myself, redemption is upon us and I can’t wait to show the world what I’m all about. I’m reintroducing myself to the world as Deontay Wilder.”

The unbeaten Fury (30-0-1, 21KOs) had the last laugh in most recent coming together in the ring, delivering a display of poise and power to stop Wilder in the seventh round, leaving the American bloodied and broken.

Wilder made a series of excuses for the loss, from the weight of an elaborate ring walk costume draining his legs to an unfounded claim that Fury had loaded gloves, while trainer Mark Breland was dispensed with after he threw in the towel to end their second fight – which came after a controversial draw in their December 2018 opener.

Wilder (42-1-1, 41KOs) has employed Malik Scott as his cornerman for this bout. Scott is a former heavyweight who won 38 of his 42 contests but he never challenged for a world title and was knocked out in the first round by Wilder when they met seven years ago.

Fury added: “It’s one s***house teaching another s***house how to fight. Both are a pack of losers and they both ain’t worth a sausage. He couldn’t teach him anything, the man couldn’t fight himself, he was a s***house.

“There’s a man here that’s going to annihilate you, dosser. Me, the Gypsy King, Tyson Fury’s the name and f*****g fighting’s the game.”