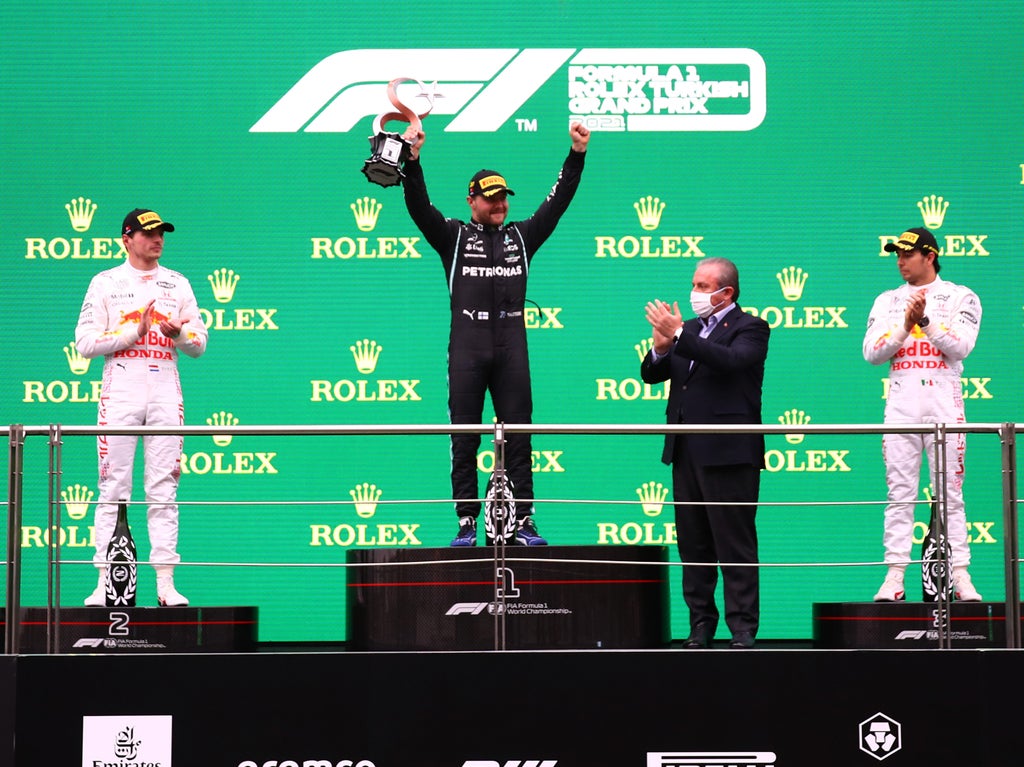 Valtteri Bottas took his first victory in 2021 at the Turkish Grand Prix on Sunday afternoon as he managed the race smartly to hold off any possible challenge from Max Verstappen.

Lewis Hamilton was left ruing a strategy call on tyres from his Mercedes team that may well have cost him a shot at the podium, while Pierre Gasly in sixth could have beaten the seven-time world champion if it wasn’t for a particularly unkind penalty from the stewards.

But who impressed most at Istanbul Park, and who will be leaving with regrets?

1. Valtteri Bottas 9/10 – Controlled the race from start to finish, calmly maintaining strong pace throughout and managing his tyres well. Passed Leclerc cleanly on track in his only real battle of the race. Couple of slides around the track when leading but nothing serious. Was given a 10/10 by boss Toto Wolff, but I mark more harshly.

2. Max Verstappen 7/10 – Said afterwards the most difficult part of the race was “trying to stay awake” and had a solid but unspectacular afternoon.

3. Sergio Perez 9/10 – Earned a podium excellently after starting sixth and produced a superb piece of defence when battling with Hamilton wheel-to-wheel for four consecutive corners on lap 34. Great performance.

4. Charles Leclerc 7/10 – Looked like a potential winner at one stage and kept pace with Verstappen and Bottas out front for the majority of the race, but made the wrong call to stay out on old inters and cost himself a podium.

5. Lewis Hamilton 7/10 – Rampaged through the field at the start with a string of efficient overtakes, before a strategy mistake between him and race engineer Peter Bonnington put him on the back foot towards the end.

6. Pierre Gasly 8/10 – Harshly given a penalty for contact with Alonso into Turn 1 but recovered and would have beaten Hamilton if it wasn’t for the heavy-handed stewards.

7. Lando Norris 7/10 – Drove consistently all afternoon and caught back up to Hamilton and Gasly by the end in a car that didn’t look quick all weekend.

8. Carlos Sainz 9/10 – Started in 19th and put together some stunning overtakes to fly up the field in the early stages of the race when the track was at its most damp. Handled the conditions better than anyone and took driver of the day for the first time in his career.

9. Lance Stroll 6/10 – Enjoyed a significantly better weekend than his teammates and moved out of the way of the likes of Hamilton and Sainz knowing he wasn’t in the same race. Sensible display.

10. Esteban Ocon 7/10 – The only man to make it through the entire race without heading into the pits, leaving Hamilton envious in his post-race interviews. Took a point after starting 12th with a brave strategy. Fair play.

11. Antonio Giovinazzi 6/10 – Fought hard to pass Ocon on his heavily-worn tyres in the final few laps but just didn’t have the traction in his Alfa Romeo to make it work.

12. Kimi Raikkonen 5/10 – Wanted to try and go to the end on his original set of inters before being over-ruled by the team, meaning he came home in a position outside of the points.

13. Daniel Ricciardo 3/10 – Never looked like mastering the conditions to progress forward from the back of the grid as Sainz did, struggling for pace throughout the afternoon and eventually finishing comfortably outside the points.

14. Yuki Tsunoda 4/10 – Fought excellently to make his Alpha Tauri as wide as possible and keep Hamilton at bay for seven laps at the start, before a silly error into Turn 1, losing the rear of the car as he over-corrected a snap of oversteer to cost him any chance of points.

15. George Russell 6/10 – Dropped back from his starting point but drove well to hold off Alonso in the final stages.

17. Fernando Alonso 3/10 – Unlucky to be side-swiped by the sandwiched Gasly into the opening corner, ruining his race, but the uncharacteristically lazy move on Schumacher that spun the German around was very poor. Never recovered from the opening lap.

18. Nicholas Latifi 5/10 – Didn’t have the pace in the Williams to match those ahead and therefore finishing ahead of the Haas cars is about par.

19. Mick Schumacher 6/10 – Recovered well after being spun by Alonso but will be disappointed not to have been able to capitalise on his highest ever grid position.

20. Nikita Mazepin 2/10 – Inexplicably blocked Hamilton under blue flags over the crest of Turn 11 and looks less competent with each passing week. Beaten by his significantly more talented teammate once again.