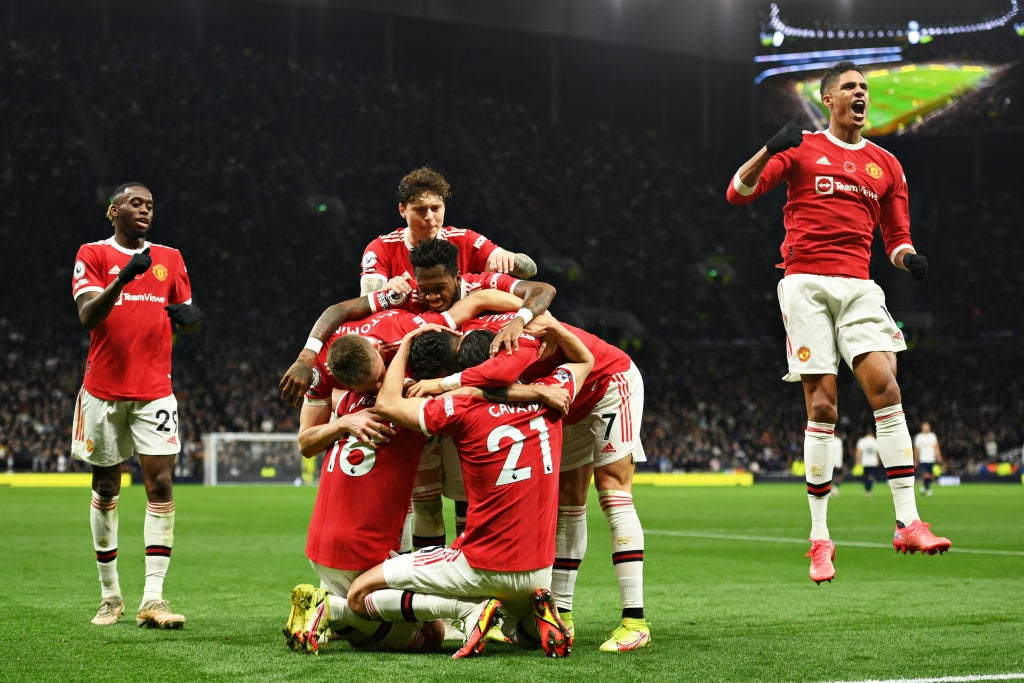 Predictable to the point of drabness and occasional comedy, albeit elevated by individual moments of the highest quality.

Goals by Cristiano Ronaldo, Edinson Cavani and Marcus Rashford were the inevitable difference between two dysfunctional teams who had both been in crisis, but with one spending an awful lot more than the other.

That is what has again spared Ole Gunnar Solskjaer immediate pressure, as he once more got a win just when all seemed lost. That will see all focus now go on Nuno Espirito Santo – and, judging by this crowd, Daniel Levy – after an utterly dismal 3-0 defeat. A match that had been all about Solskjaer became about how bad Spurs were.

That was what was really predictable.

It was not just that Solskjaer got the win he always tends to in such situations. It was that the predictability of Spurs’ tepid approach made it a certainty. United could willingly look on Tottenham Hotspur Stadium and be glad they don’t have those problems.

While the travelling supporters offered their usual show of support to Solskjaer regardless of circumstances, that really wasn’t the case from the home fans.

The boos just got louder as the game went on, to the point they became deafening, and culminating in shouts that the manager didn’t know what he was doing and that Daniel Levy should follow him out of the club.

Solskjaer couldn’t have looked more grateful to Ronaldo when the Portuguese came off.

The Norwegian’s initial approach said much more than his media comments, and even the result. It was essentially an admission that a clean sheet would keep him in the job for this week, at least, and avert immediate danger.

So, despite one of the most front-loaded squads in world football and an array of attacking stars, he went with a formation that featured five defenders and two defensive midfielders.

At a certain point in the first half, Aaron Wan-Bissaka had been on the ball more than any United player.

That would have been exactly what Spurs would have wanted, but it was difficult to say they were playing to any kind of plan. They just look such a directionless club right now, which was reflected in the atmosphere at the stadium.

While boos were heard most, mocking laughter could have been forgiven.

That is genuinely no exaggeration. The high quality of the Ronaldo goal stood out all the more, because it was preceded by the kind of extended passage that would not have looked out of place on one of those videos showcasing “rubbish football” from the past. It was just a catalogue of errors.

In the space of about 10 minutes, both teams repeatedly hoofed it into the air, a spell ending with Son Heung-Min slicing it and Pierre-Emile Hojbjerg just whacking it up. Wan-Bissaka then played a flick out to nowhere before finding nothing with a bizarre cross across the box, before Fernandes just aimlessly chipped the ball out of play.

That was what made the Portuguese’s next moment all the more impressive.

Despite a generally wayward performance, he displayed perfect perception with a superb ball for Ronaldo to fire in. It was a divine finish to match the delivery, a fine volley right into the corner.

It was also pretty much it, given the utter poverty of Spurs’ attacking.

With the foundation of a clean sheet eroded and blown away, Nuno’s side had absolutely nothing to build on. They couldn’t construct a spell of possession, let alone an attack.

One wasted moment saw Giovani Lo Celso pass to no one. Another saw Kane so slowly make his way down the wing when a counter presented, and then just harmlessly chip the ball into the area.

United literally just had to stand up straight up against that, but there was a sense of their own confidence increasing as that of Spurs just evaporated.

Hence the sense of self-expression for that clinching second goal, made the look all the more emphatic by the manner in which the opposition were self-sabotaging. As Oliver Skipp hesitated on the ball Edinson Cavani just strode forward. As Hojbjerg fell, Fernandes checked back to create more space.

Cavani was left to finish deliciously from a Ronaldo pass that bisected a muddled Spurs back line.

They were goals so good that the game scarcely deserved them.

Whether Nuno now deserves to lose his job will be the next big question. Solskjaer has extended his stay of execution, at the last, as many expected.

Part of the issue, however, is that so much of this was so predictable.