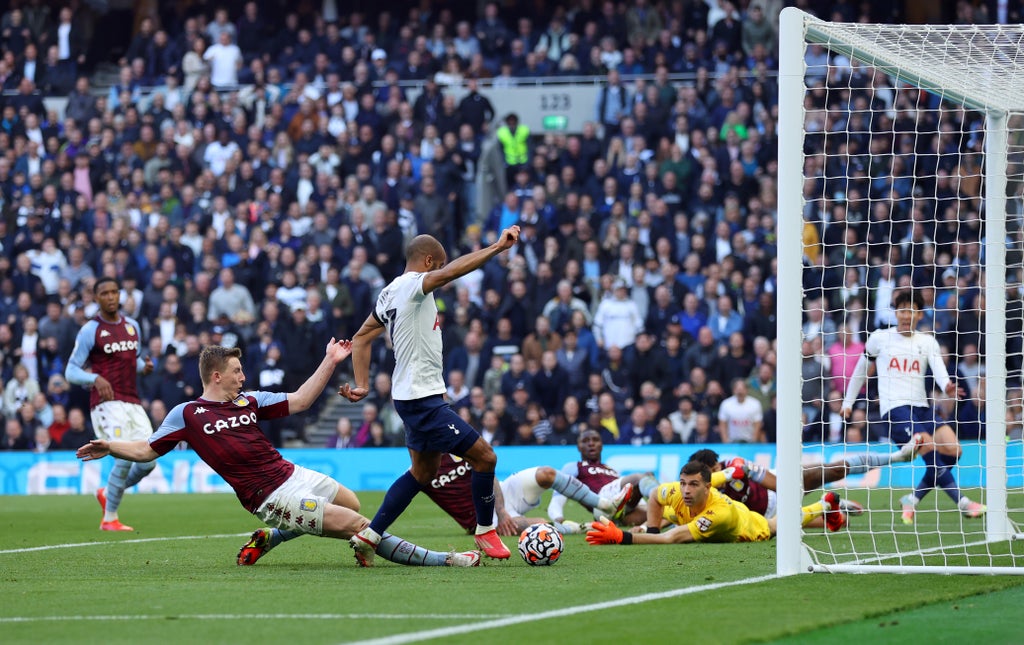 It was by no means a pretty game of football or one that spoke of victors showing their worth. But as Tottenham Hotspur triumphed 2-1 over Aston Villa, ending a run of three successive defeats, aesthetics mattered very little.

The catalyst of this about-turn was a familiar face. Son Heung-min provided Pierre-Emile Hojbjerg’s opener then registered a second assist when his devilish cross forced Matt Targett into an own goal as he tried and failed to clear ahead of Lucas Moura. The Villa left-back had earlier laid on Ollie Watkins’ first goal of the season which momentarily drew the Midlands side level with 23 minutes to go. Just four minutes later, the lead was reasserted and, all told, never looked like being relinquished again.

Losing here would have been unthinkable for Spurs and Nuno Espirito Santo. Not since November 2004 had they lost four in a row, a run that was part of a greater six during which time Jacques Santini’s tenure at White Hart Lane came to an end. It would not be too outlandish to say Nuno is walking a similar tightrope with reports of questions over his methods and generally tactical mannerisms. And though this was not a wholly convincing way to pick up a fourth win of the Premier League season, no one was complaining when Chris Kavanagh blew the final whistle. Nuno, visibly relieved, walked off to a generous round of applause.

A week is a long time in football, but nowhere near long enough to dissipate the fury of such a meek performance in the North London Derby. Last Sunday’s 3-1 defeat to Arsenal was still eating away at those in white as they turned up to the Tottenham Hotspur Stadium on Sunday afternoon. The sun shone but they’d need more than that to brighten the gloom that has descended over these parts.

After losses to Crystal Palace, Chelsea and Arsenal with nine goals conceded, their opponents here were always going to be regarded as “tricky” opponents to overcome in a fixture that was “must-win” for any tangible sense of improvement. But Aston Villa’s credentials do not need to be exaggerated by the circumstances. Their victory last time out against Manchester United at Old Trafford was another marker on their steady progress under Dean Smith. A variety of attacking threats on a robust defensive base, built with the blessings of a supportive hierarchy and cheered on by a set of fans who have been wondering when they last had it so good from top to bottom. Only a point separated Villa and Spurs ahead of 2pm but they are worlds apart.

The first groans of home discontent took just 25 seconds to arrive, as the visitors won the ball high up and made their first moves towards the Spurs goal. Alas it was a trick they were unable to repeat effectively in what was a poor first half.

Danny Ings and Watkins kept at it, with Targett and Matty Cash offering further support in wide areas when in and out of possession. But all four found themselves increasingly marginalised as the middle became a mosh pit of mislaid passes and clipped heels between the team’s respective midfield three.

That favoured Spurs’ trio of Hoijberg, Ndombele and Oliver Skipp, who had struggled to make good on the ball despite seeing much more of it than Douglas Luiz, John McGinn and Jacob Ramsey.

It was from one of the central mini scraps that Spurs took the lead. Hojbjerg fought for a loose ball, barged past the imposing Tyrone Mings and popped a pass to Son to continue the attack. With support arriving in the box, Hojbjerg dropped to the edge. Son found the Dane, who set himself and found the far corner with a low, guided finish.

The second-half began with sighters for Ings, who had a chance from six yards off pinched off his right foot by Skipp’s last-ditch hook away, then for Targett whose drilled shot from the same phase of play was blocked by a rocksteady Cristian Romero. But once the initial flurry had subsided, Spurs looked the more likely to get the game’s second goal.

Specifically Son, who registered four efforts on goal in the space of eight minutes leading up to the hour. The best of them was the third: a beeline to the near post after Ndombele had intercepted and fed Kane down the right. Another combination for this fruitful duo looked nailed on, only for Son to steer Kane’s forceful cross the wrong side of the post.

Thus the deflation when the equaliser came was no surprise. Like the opener, its origins were not pretty, a mess of bodies with Watkins saw Ezri Konsa poke to Ramsey, who was cut down by Romero after passing to Ings. The advantage, though, was clear, and rubber-stamped when Ings teed up an overlapping Targett to cross to Watkins, who was rewarded for valiantly continuing his run.

However a disgruntled home crowd did not have long to stew for long. Son put his head down once more and decided, this time, Kortney Hause was going to be turned inside-out. Kane had pulled back to the penalty spot, but Son had spotted Moura busting a gut and rewarded the Brazilian’s endeavour by sliding across an unmissable chance from barely a yard out. Alas, after due consideration, Targett was “awarded” the goal with replays showing his to be the final touch.

Contained within the remaining 19 minutes were more for Spurs than Villa, even though Smith overloaded their forward areas with Bertrand Traore and Emi Buendia thrown on.

A tame effort from Ings aside, Spurs were the ones creating the better chances and should have added gloss to the scoreline. Arguably the best move of the game – Son driving and finding Kane, who back-heeled superbly to second-half substitute Giovani Lo Celso – was blocked more or less on the line by Mings. Kane then missed a one-on-one with two minutes to go after latching onto a Lloris hoof to shoot low but into the left foot of Emi Martinez.

The game petered out with a raft of well-bought fouls, mostly by Son whose energy levels did not dim until cheers of relief filled the air. Tottenham are certainly not back, but they’re also not broke.