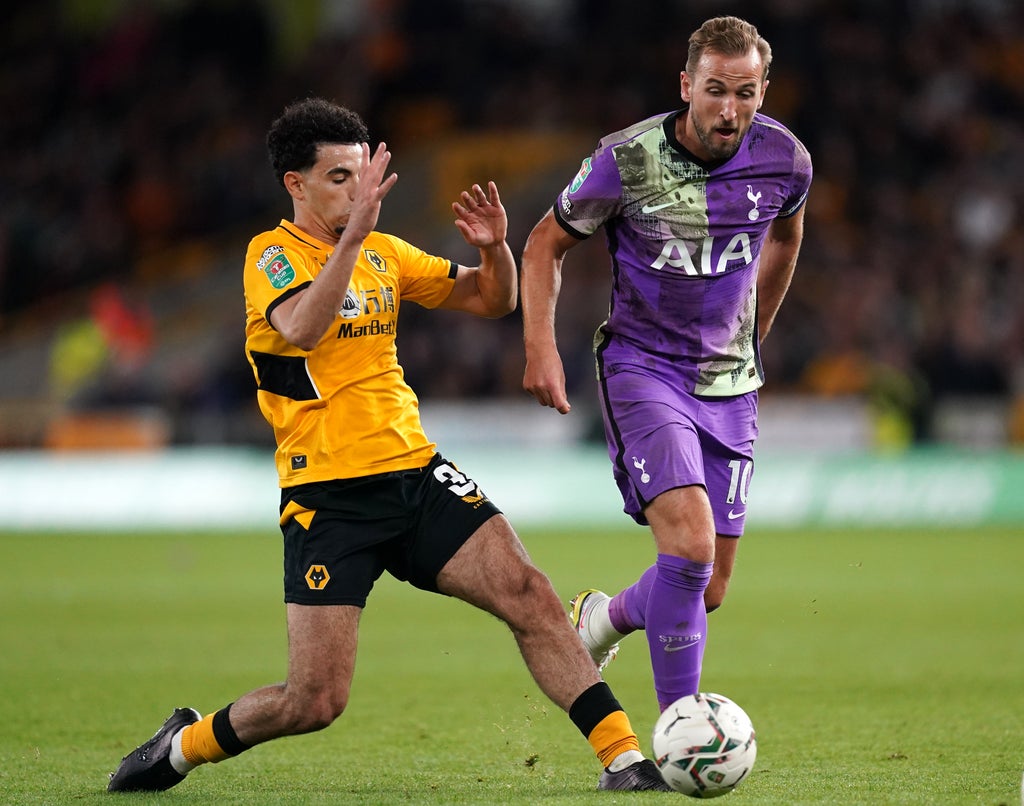 They threw away a 2-0 lead but booked a last 16 tie against Burnley after going through 3-2 on penalties following a 2-2 draw.

Ruben Neves, Leander Dendoncker and Conor Coady missed in the shoot-out for Wolves.

Tanguy Ndombele and Kane put the visitors in control in the first half only for Dendoncker and Daniel Podence to hit back for Wolves.

Kane has endured a slow start after his move to Manchester City failed to materialise and scored just his second Spurs goal of the season but Nuno believes the England striker is still getting up to speed after Euro 2020.

He said: “He has much more to give and it’s about the game, improving and growing together.

“Until we have been able to balance everything, then it will be the moment when the players will improve.”

Ndombele fired Spurs ahead after 14 minutes when he charged down Coady’s clearance and beat John Ruddy.

Kane added a second nine minutes later when he raced onto Dele Alli’s pass to find the bottom corner.

Spurs continued to threaten but Wolves pulled a goal back against the run of play when Dendoncker headed in Rayan Ait-Nouri’s corner.

They levelled after 58 minutes when Ndombele lost the ball for Podence to score but neither side could find a winner after Ruddy denied Kane and Neves hit the bar.

“We allowed Wolves to get back into the game,” Nuno added. “We dominated, pressed, recovered balls and created so many chances to put the game to bed.

“We spent a lot of time preparing (for penalties) because it’s not luck. It’s having a goalkeeper who has the right info, the players taking the responsibility.”

The hosts missed three of their spot-kicks and, despite Ruddy saving from Pierre-Emile Hojbjerg, Kane, Sergio Reguilon and Bryan Gil netted for Spurs.

Wolves, at least, scored their first home goals of the season but have lost five of their seven games under Bruno Lage, who replaced Nuno in the summer.

Lage said: “At 2-0 down and we had the power and strength to continue our focus in the strategy and plan. We have that opportunity to think about it and learn something for the next game.

“It is hard to lose this game because of the way we prepared.

“The way we concede chances is very frustrating. It is very easy chances for the opponents. We are working hard on that part but we’re still making mistakes.”