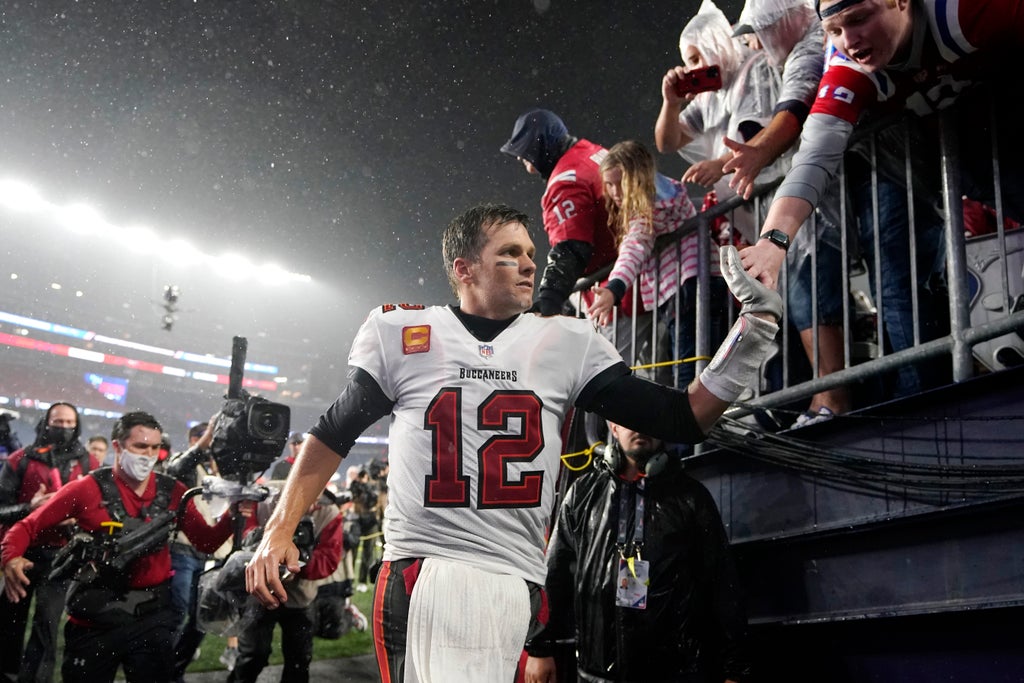 Tom Brady became the NFL’s all-time leading passer at the home of his former side the New England Patriots in a 19-17 win for the Tampa Bay Buccaneers.

Brady has made plenty of NFL history at the Gillette Stadium already, and the 44-year-old went into the game just 68 yards shy of the record held by Drew Brees.

Less than 10 minutes into proceedings, and the Bucs’ QB surpassed the 80,358 yard milestone. He had 269 in all on the night.

Ryan Succop made four field goals for Tampa, with Ronald Jones the only Buccaneer to find the endzone on a eight-yard rush, while the Patriots scored a TD in each half.

The game came down to Nick Folk missing a field goal with less than a minute left, his 56-yard attempt coming back off the post.

The 42-30 victory saw Reid become the first coach in the competition to win 100 games, including play-offs, with two franchises.

Patrick Mahomes threw five touchdowns as the Chiefs bounced back after successive losses to the Baltimore Ravens and the Los Angeles Chargers.

The Carolina Panthers’ 100 per cent start to the season came to an end as they were beaten 36-28 by the Dallas Cowboys, for whom Dak Prescott produced a four-touchdown display.

The Indianapolis Colts secured their first win of the campaign as they won 27-17 against the Miami Dolphins, and the New York Giants got off the mark as well with a 27-21 overtime victory against the New Orleans Saints.

The New York Jets also triumphed in overtime for a first win of the season as they overcame the Tennessee Titans 27-24.

Kyler Murray threw two touchdown passes as the Arizona Cardinals improved to 4-0 with a 37-20 win over the Los Angeles Rams, while Russell Wilson also had two TDs in the air and rushed for another in a 28-21 win for the Seattle Seahawks over the San Francisco 49ers.

The Baltimore Ravens saw off the Denver Broncos 23-7, which the Green Bay Packers defeated the Pittsburgh Steelers 27-17.

The Detroit Lions remain winless following a 24-14 loss to the Chicago Bears and the Buffalo Bills beat the Houston Texans 40-0 at Highmark Stadium.