RAHEEM STERLING says he cannot be truly happy if he is not playing regular football and scoring goals.

So that explains why the last seven months have been so difficult for the Manchester City forward.

Despite starring for England at the Euros, Sterling has scored just twice in his last 26 appearances for the champions, many of which have been from the bench.

He lost his place for the big games after the Manchester derby defeat to United at the Etihad in early March.

And as a result City boss Pep Guardiola has made him a substitute for most of the key matches since, including the recent league trips to Chelsea and Liverpool.

Sterling has started just four games so far this season, of which only two have been in the  League. And most of his opportunities have come as a No 9 — a position he is trying to  perfect, although he knows it will take time.

Sterling said: “From a young age, football has been the most important thing in my life. My  happiest I should say.

“When I play football, that is where I get my happiness from. And, of course, with family as well but football has a special place in my heart.

JOIN SUN VEGAS: GET A FREE £10 BONUS WITH 100s OF GAMES TO PLAY AND NO DEPOSIT REQUIRED (Ts&Cs apply)

“With everything that comes with football, money, being able to do nice things… at the end of the day, if football for me is not at a certain standard, I’m not really at my happiest.

“If I want my happiness at a certain level, I need to be playing football, I need to be scoring goals and enjoying myself.” So at the moment, he is not enjoying spending so much time on the bench.

For as long as Sterling can remember, playing the game he loves has been the way to get a smile back on his face.

He said: “Growing up, I faced a lot of adversity but at the same time I never let that define what I wanted to do.

“Football offered me an avenue where everything else, all the adversity, wasn’t so blatantly in your face. I’m truly grateful for football.

“It got me away from a lot of those difficult circumstances that me and my family were facing at that time.”

In recent years, Sterling has tried to turn adversity into a positive — by using it as motivation.

He said: “If there is a big game coming up, probably a little bit of criticism can help to spin it, to give me an edge.

“It’s one of my best traits. I mean, it’s like a challenge.

“Not necessarily something negative. But maybe somebody said ‘he’s not scored in a few games now’ and I’ve got one coming up. Something like that.”

RAHEEM ON THE EUROS 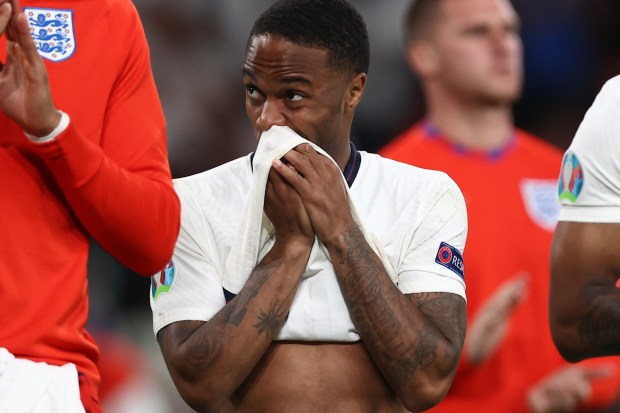 Had Gareth Southgate’s men lifted the trophy, then nobody would have deserved it more than Raheem Sterling, who scored three times during the tournament.

But the City man revealed his first thought after the agonising final defeat  was for his three team-mates who missed from the spot.

Marcus Rashford, Jadon Sancho and Bukayo Saka all bravely stepped up to take spot-kicks but could not find the net.

Sterling said: “My absolute concern was the well-being of my team-mates. Making sure they were all right. That’s the most important thing.

“That’s what we all try to do as team-mates, making sure our mates are good. It’s a situation that builds character as well.

“These things happen in life — and on the football field — and I do believe that eventually it will make us tougher.”

All three were then subjected to racial abuse on social media, with much of it coming from so-called fans of England.

Sterling added: “Having that confidence and belief in yourself — knowing millions of people are watching you — and then to be racially abused after trying your utmost   for your country, it’s disappointing.

“It’s something we are still talking about. It’s still happening, and for it to be by your own fans as well, is not nice.”

The problem is the big games have not been coming around regularly enough for Sterling at City recently.

He had been a virtual shoo-in throughout his six-year stay at the Etihad until he found himself sidelined in the spring.

And he believes playing almost every game has been the key to his success — which has seen him score 115 goals and win eight major medals at City.

Sterling added: “It’s about  consistency. You might have a Champions League game midweek against one of the biggest teams in Europe.

“And then at the weekend you might have to travel to one of the teams in the relegation zone.

“It’s having that same will and desire. It’s that consistency. To win and want to win.”

As well as thinking about his short-term future, Sterling, 26, has begun to plan what he might do when he hangs up his boots.

That will not be for a while yet as he  has plenty he would like to achieve at club and international level — but he is soon launching his own foundation.

Speaking to FT Live, Sterling said: “It’s something I do think about quite a bit. I would like to leave my mark.

“I don’t want to play football, earn money and then just go with the wind and just be in Jamaica  somewhere. I’ve always said I want to give back. I want to say, ‘

That’s something I’ve done and now it’s helping individuals to get out of situations that I faced when I was younger’.

“My foundation that I’ll be launching soon is a big pride and joy.”

The aim will be to provide  something that he would have found useful during his own upbringing.

Sterling added: “It will focus on underprivileged kids who are in  situations that I faced when I was younger. From a single parent home, not a lot of financial stability, and just try to be a helping hand.

“When I was younger, it’s something you always wished you’d had — someone or an organisation to listen and just be a helping hand.

“That’s what the foundation will do. If someone is studying for university and the family can’t financially support that, we’ll be another avenue to help people try and chase their goals.”