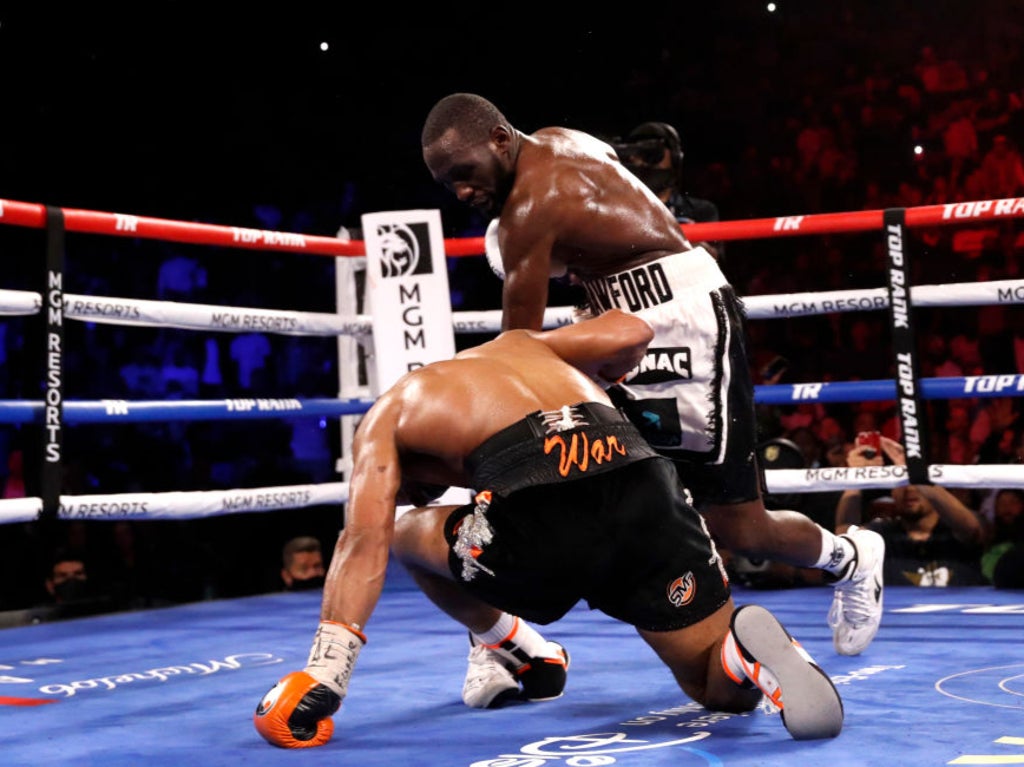 As a bobbing right hand fizzed through the air and crumbled Shawn Porter to his knees, the questions and caveats that have long trailed Terence Crawford’s march on boxing greatness were finally put to rest. For all the titles the hard-edged but subtly skilled American has collected, there remained quiet whispers over the calibre of his opponents. Through no fault of his own, the best in the welterweight division have often eluded him. Against Porter, an established former champion, Crawford produced the type of deadly finish in the tenth round that will silence any doubts.

It had been a rugged and relatively even contest up until that point. Two old friends, a roughhouser and a sharpshooter, gambling it all under the lights in Las Vegas. They are the nights that have always fed boxing’s imagination but seem to have become increasingly rare in reality. But at the Mandalay Bay Casino, with Tommy Hearns sat ringside and Porter emblazoned in tribute to the late Marvin Hagler, it really did feel like a piece of boxing history.

Crawford had rightly been a heavy favourite but he started slow, scoping out Porter, who calculated his charges forwards to great success. He landed a few clean jabs and a solitary right hand to claim the first round. The tension in the ring rested on a knife-edge, a constant battle of minds deciphered with every step, and the engulfing atmosphere was charged. In the second round, the fuse exploded. Both fighters opened up, Porter landed a find counter-right clean through the guard and followed it up with a hook. Crawford smiled, snarled, and landed a short left of his own as Porter lunged in for more.

When two fighters have known each other since they were teenagers, the war quickly becomes psychological. Every time Porter found success, Crawford would shake his head in dismissal, seize on a collective gasp in the crowd, and launch into spiteful flurries of his own. Their heads inevitably and repeatedly clashed as they came in close and soon both fighters had cuts on their right eye.

At least for a while, Porter was able to keep the champion out of his stride. His rushing tactics, mauling on the inside, using the strength that made him such a promising American football athlete, were effective at stifling Crawford’s snappier punches. Once up close, he landed scrappy punches to the head and body. At the midway stage, they were even on all three of the judges’ scorecards.

But slowly, it became apparent that Crawford’s lens was moving ominously into focus. Increasingly, he began timing Porter’s lurches, clipping him with snapping hooks and clean left hands to the head and body. Porter’s body betrayed few signs of pain as he continued to barrel forwards, but slowly and surely the punishment was taking a toll.

In the ninth, Crawford dominated, anticipating Porter’s every strike, and fittingly the fight ended as it entered the championship rounds. A vicious counter-uppercut connected with Porter’s chin and stopped him in his tracks. He fell back against the canvas, bounced back up almost immediately and vowed to continue, but bravery would not provide a defence for much longer. Crawford sprung on his toes patiently and coiled like a piston waiting to fire. Porter dove in and, although a replica uppercut missed by a fraction, Crawford’s follow-up shot to the temple sent his opponent sprawling again. Porter bashed the canvas in frustration, the strength sapped from his arms, and his father, Kenny, took to the ring apron and waved a white towel. It was the first time Porter had ever been stopped in his long and distinguished career. In the short hours after the fight, he announced that it would be the last time, too, confirming his retirement at the post-fight press conference.

For Crawford, it was a ninth successive stoppage victory. A world champion in three different weight classes, there is only one fight left he and boxing crave; an epic that could truly go some way to matching the feats of Hagler and Hearns so many years ago. Errol Spence Jr, the WBC and IBF champion, had been ringside for the bout but left as soon as it ended, before the pandemonium and showboating could begin. With Crawford now set to align with the same promoter as his arch-rival, the time for patience and politicking may finally be over. When that time comes, those who doubt Crawford’s legitimacy will be few and far between.