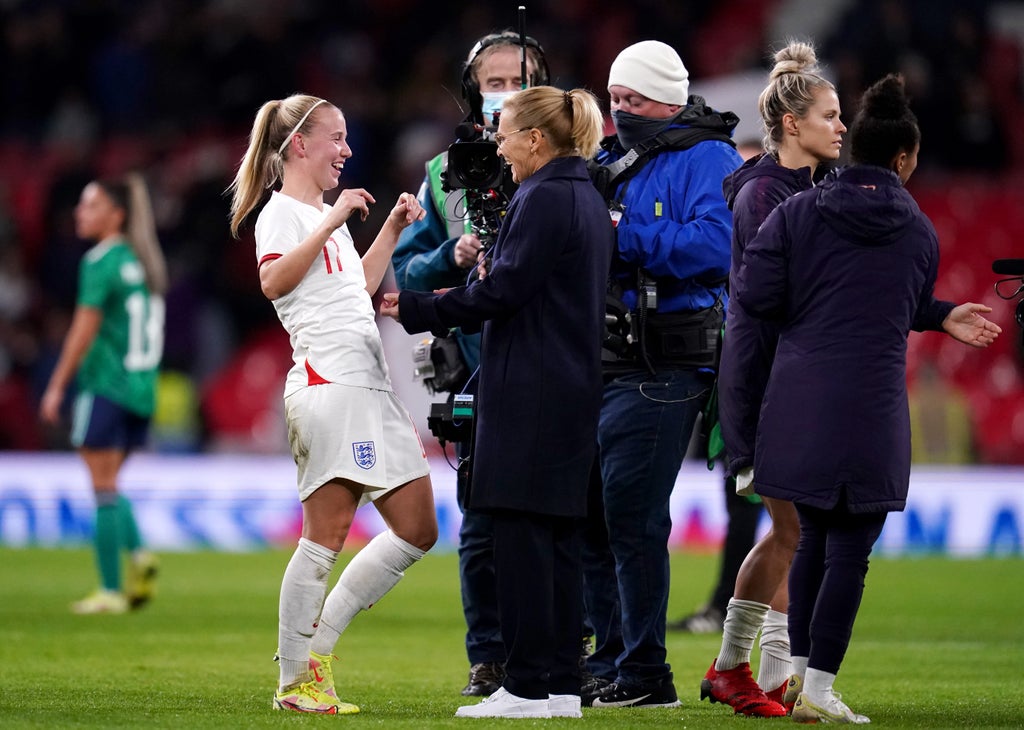 Mead was left out of the Great Britain Olympic team but has starred for Arsenal and England and her hat-trick in less than 15 minutes after coming on as a substitute proved decisive in a previously hard-fought match.

The visitors had defended resolutely at Wembley and put their bodies on the line until Mead’s introduction but she scored with her first touch just moments after coming onto the field, a brilliant finish on the turn past goalkeeper Jacqueline Burns.

Mead then volleyed home Hemp’s cross at the back post before tapping into an empty net in the 78th minute to bring up her hat-trick.

“Of course she feels good, that we can see and she did well, of course I’m really happy for the team that she scored three goals and for her especially,” Wiegman said.

“But I think the team does really well too and when the players feel comfortable and we feel like we’re collaborating together then players can shine too.

“She starting shining when she came on so she did a really good job but overall I think this team shows – we don’t have the hardest opponents at the moment but today was a pretty hard game, but we’re working together and we’re feeling good and we just want to go forward and forward.”

The result ensures England remain top of the group, with this their lowest number of goals in the campaign so far after thrashing North Macedonia 8-0 and knocking 10 past Luxembourg.

“Of course I’m very happy with this win, in the beginning I thought it was a very hard game because they dropped deep very far – we knew that of course and we created a lot of chances, we just had to keep patient to create even more chances and score the goal,” Wiegman said.

Northern Ireland’s eight-game winning run in competitive fixtures came to an end and manager Kenny Shiels admitted his side were not physically able to keep up with England.

“I don’t think we played anywhere near what we can. England have got superior fitness, superior strength, superior size, superior speed, which restricted our normal game,” the Northern Ireland boss said.

“If you look at the full-time and the half-time (score) there’s a perfect example of it and we couldn’t get close to them and they beat us through their athleticism and their stronger bench.

“At 0-0 they were worried because the first 15 minutes of the second half we were threatening sporadically and there were occasions, we had two chances at the back post and we weren’t clinical in that area.

“You could see the strength and power that they had and I felt that we can’t disagree with the final outcome of 4-0.

“But we showed a lot of courage and for the first hour – I wouldn’t say we were comfortable but we negated everything they threw at us and they scored with a flick and that was it, the players from the bench were too strong and too quick and there wasn’t much we could do about it.”