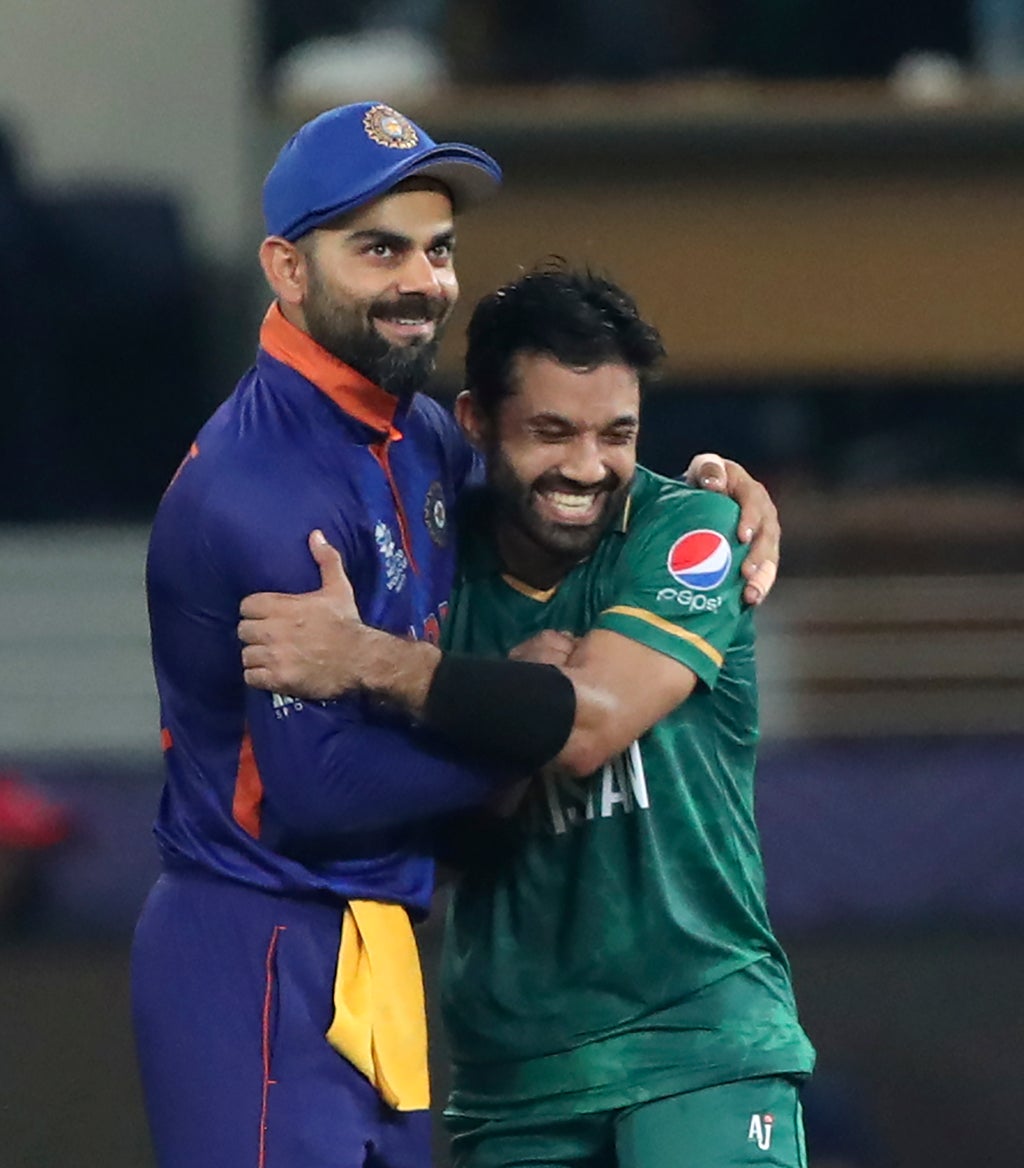 Virat Kohli was gracious in defeat after India started their T20 World Cup by being hammered by arch rivals Pakistan in Dubai.

India are widely regarded as the tournament favourites but were overwhelmed by Pakistan, who chased down 152 with 10 wickets and 13 balls to spare thanks to unbeaten half-centuries from captain Babar Azam and Mohammad Rizwan.

Pakistan were left celebrating an historic maiden victory over their neighbours in 13 attempts at a World Cup, with India prevailing in the previous dozen contests, seven in the 50-over format and five in T20s.

While Kohli indicated the evening dew on a hot and sticky Sunday evening might have benefited Pakistan in their successful chase, India’s talismanic captain acknowledged his side were second best throughout.

He said: “They definitely outplayed us. There is no doubt about that. You don’t win by 10 wickets if you don’t outplay the opposition. We did not even get any chances.

“They were very professional. You definitely have to give them credit. We tried our best. We tried to create enough pressure on them, but they had the answers, and there is no shame in accepting that a team played better than you.

“You don’t go out there to take anything lightly, especially a team like Pakistan who on their day can beat anyone in the world. This is a game that has to be respected, and we are a team that definitely respects the game.

“We do not think that [losing] one game is the end of the world, and no other team should think that. On the day if we haven’t played good, we accept it and we give credit to the opposition, as well.”

Babar finished unbeaten on 68 from 52 balls while Rizwan contributed 79 not out from 55 deliveries after India had recovered from 31 for three to post 151 for seven on a sluggish track, Kohli anchoring the innings with 57.

Shaheen Shah Afridi set the tone, bowling fast and full to snare India openers Rohit Sharma and KL Rahul, both of whom were preferred to Ishan Kishan, who sparkled towards the end of the Indian Premier League season.

But Kohli, who will stand down as India’s T20 captain at the end of this tournament, bristled when asked whether it was a mistake to play Rohit ahead of Kishan.

“It’s a very brave question, I played the team that I thought was the best,” Kohli said before putting his head in his hand then adding: “Unbelievable. If you want controversy, please tell me before so I can answer accordingly.”

Shaheen finished with figures of three for 31, snaring Kohli towards the end of India’s innings, before Babar and Rizwan took centre stage, with the batters hugging in the middle after getting the job done.

“It is a really good feeling to win against India in World Cup and a special thing for our Pakistan,” Shaheen said.

“The way Rizi and Babar finished the game and the way they’re playing, I think credit goes to these two, like one-man army swinging the bat. It’s good for Pakistan to start good.”