Word emerged Thursday that longtime NFL coaches Steve Wilks and Ray Horton have joined Flores’ racial discrimination lawsuit against the league – which seeks class-action status – and that significant development presents another problem for the most successful and powerful league in professional sports.

Initially, Flores was only one individual challenging a behemoth. Now, there are three coaches eager to take the fight to the NFL, both for themselves as well as other Black NFL employees who are fed up with the state of inclusive hiring from the front office to the field.

The allegations that Wilks and Horton contributed to the amended complaint are eerily like those Black coaches and executives raise when they gather together and while speaking privately with reporters. In their opinion, there is widespread malfeasance in NFL hiring.

Wilks, according to lawyers, was discriminated against as a “bridge coach” who was “not given any meaningful chance to succeed” with the Arizona Cardinals. Wilks was 3-13 in one season with Arizona in 2018 before being fired and replaced by Kliff Kingsbury. Lawyers argue that although Kingsbury has been successful, “Mr. Wilks, given the same opportunity afforded to Mr. Kingsbury, surely would have succeeded as well.”

This year, Wilks returned to the NFL as pass game coordinator and secondary coach for the Carolina Panthers. Through his lawyers, Wilks, who spent the 2021 season as the University of Missouri’s defensive coordinator, issued a statement on the stance he took in support of Flores, other Black NFL employees and, well, himself.

“This lawsuit has shed further important light on a problem that we all know exists, but that too few are willing to confront,” Wilks said in the statement. “Black coaches and candidates should have exactly the same ability to become employed, and remain employed, as white coaches and candidates. That is not currently the case, and I look forward to working with Coach Flores and Coach Horton to ensure that the aspiration of racial equality in the NFL becomes a reality.”

Clearly, Wilks is all-in. In seems Horton is right there with him and Flores, too.

The Tennessee Titans’ defensive coordinator during the 2014-15 season, Horton once interviewed for the team’s head coaching position. He was given a “completely sham interview done only to comply with the Rooney Rule and to demonstrate an appearance of equal opportunity and a false willingness to consider a minority candidate for the position,” Horton’s lawyers wrote in the amended lawsuit that was filed in the Southern District of New York.

The Titans hired Mike Mularkey, who is white. Horton left to be the Cleveland Browns’ defensive coordinator and last worked in the league in 2019 with Washington. He has since retired.

But here’s the twist: Mularkey, who served as the Titans’ interim head coach for the final nine game of the 2015 season, said in a 2020 podcast that the club’s owners told him he was going to get the job before they’d completed the interview process, including interviewing two minority candidates.

In review, Wilks alleges that the Cardinals only hired him because they were waiting on the white coach they truly wanted to become available. Horton claims the Titans conducted a sham interview with him merely to comply with the Rooney Rule, which is a violation under the leaguewide rule that governs hiring.

The preceding paragraph is the least surprising thing Black NFL employees will read. Ever.

The fact is, in interviews with Andscape the week Flores filed his suit, several Black NFL coaches and front-office employees predicted that others would eventually attach themselves to Flores’ suit because of the widespread frustration about their overall lack of advancement within the game. They also pointed to sham interviews and an overall lack of support from team ownership. 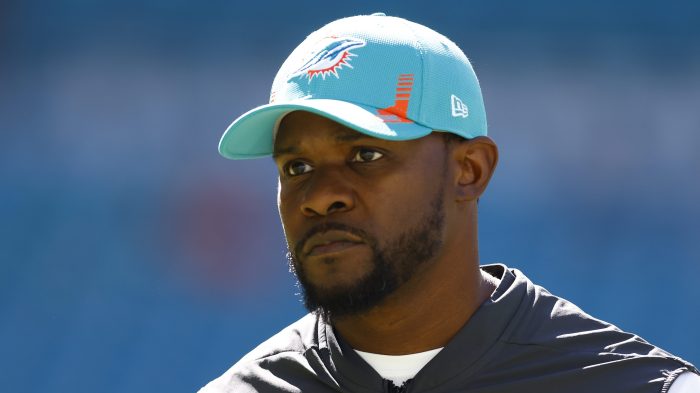 The NFL has only three Black head coaches: Mike Tomlin of the Pittsburgh Steelers, Lovie Smith of the Houston Texans and Todd Bowles of the Tampa Bay Buccaneers, who was promoted from defensive coordinator on March 30 after coach Bruce Arians stepped down and took a front-office role. Mike McDaniel of the Miami Dolphins, who is biracial, joins Ron Rivera of the Washington Commanders and Robert Saleh of the New York Jets as the league’s other minority head coaches.

As always, it bears repeating: The NFL has 32 teams.

Over the previous five hiring cycles, there were 36 head coaching openings. Only four Black men were hired to fill positions. In the hiring cycle completed before this season’s NFL scouting combine, white coaches were chosen for seven of the nine openings. Bowles’ unexpected promotion occurred after the cycle was believed to have been completed.

Even the NFL acknowledges it has underperformed significantly in inclusive hiring. During the annual meeting of club owners in West Palm Beach, Florida, last month, the league took the stunning step of approving a coaching hiring mandate. Club owners adopted a policy that requires all 32 teams to hire a minority offensive assistant coach for the 2022 season – the first hiring mandate in the league’s history.

Throughout every iteration of the Rooney Rule, the league’s main tool to help foster diversity and inclusion in its workplace, owners have maintained their opposition to any form of hiring mandates. In the earliest discussions that resulted in the longtime rule’s creation, the potential approval of a quota system – for any position on the coaching ladder – was considered a non-starter.

With Flores – and now Wilks and Horton as well – going to the mat, and the hiring evidence downright awful, well, times have clearly changed.

Flores, Wilks and Horton still have a monumental climb ahead of them to prove their claims, and no competent legal expert would predict defeat for the NFL. In these types of situations, the odds favor goliaths.

With Flores not rolling alone, however, it appears the NFL may have to dig in for a longer fight.