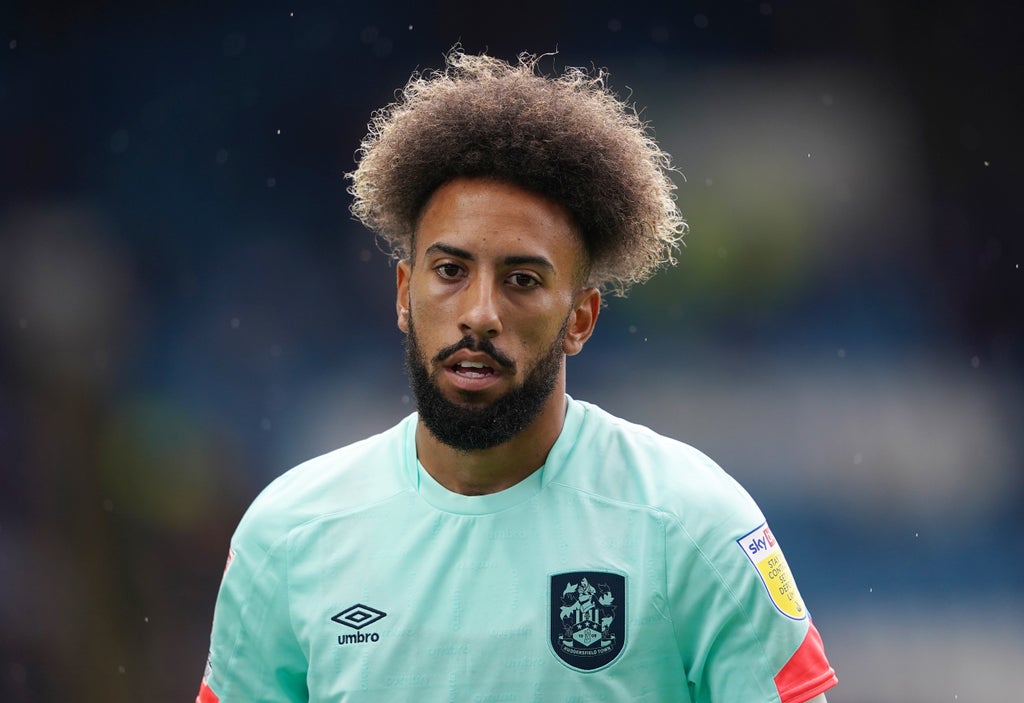 Sorba Thomas is pinching himself after completing the journey from scaffolder and part-time footballer to the Wales squad with a call-up that left his mother in tears.

Newham-born Thomas was playing non-league football for Boreham Wood at the start of the year before landing a January move to Huddersfield.

The 22-year-old did not start a league game for the Terriers until this term but, having built up his pre-season fitness with long beach runs at Porthcawl Thomas was named the Sky Bet Championship player of the month for August.

Even better was to come as Thomas – who qualifies for Wales through his Newport-born mother Gail – was called up by Dragons boss Robert Page for this week’s World Cup qualifying double-header in the Czech Republic and Estonia.

“Sometimes I pinch myself to make sure it’s not all a dream,” Thomas said ahead of Friday’s clash with the Czechs in Prague.

“Guys I used to watch on TV or play as on FIFA not long ago are now standing right next to me. It’s an amazing feeling.

“I always said from a young boy I wanted to play for Wales. The fact Rob Page came to see me play and I’m here right now in a Wales polo shirt is a dream come true.

“I was told I had been selected for Wales on the day of a (Huddersfield) game.

“I was sitting in my hotel room and the first thing I did was call my mum and I had her crying to me on the phone. It showed me how much it meant for me, but for her it was massive.”

Thomas’ football journey began at West Ham but dreams of making the grade at his local club ended at the age of 16.

The disappointment hurt so much that Thomas threw his boots in a bin and focused on life outside football before National League outfit Boreham Wood gave him another opportunity.

“As a young boy at West Ham you feel you’re a good footballer and you’re going to be a pro footballer,” Thomas said.

“Being told you’re not good enough is a smack in the face. I will never forget that day. That was the first time I was told that and I didn’t take it well.

“I didn’t really want to play anymore. I fell out of love with the game and tried to look at plan Bs.

“I had some hard days doing scaffolding putting those poles up but getting back on the horse was hard.

“I started a little Sunday League team for a few months and tried to find the love again.

“When I played again it was to try and get to the top and rub it in a few people’s faces – some who didn’t really believe in me back then. For me, it is a lot of fuel to burn.”

Thomas was converted to a wing-back during a National League game at Yeovil and says he suddenly “played with a lot of joy and a smile on my face”.

He played nearly 100 games for Boreham Wood before agreeing a Huddersfield contract until the summer of 2024 and following the likes of Ashley Williams, Jamie Vardy and Michail Antonio out of non-league football.

“I look at their journeys as they became top players in the Premier League,” Thomas said.

“You want to follow in their footsteps and create your own path.”

As well as taking umbrage at his ratings on the game, he was upset that his card featured the English flag and he placed its Welsh counterpart over it.

“Unfortunately it’s not been changed yet,” he said. “I will be back on their case very soon and hopefully it does get changed.

“I was also not happy with the stats. 80 pace? I don’t know who they have been watching on the games but it wasn’t me.

“I am definitely a high 85-86 for sure. Maybe pushing the 90s. The dribbling, I think, the whole card I wasn’t happy about.

“But I’m just buzzing to be here. I’m gutted (injured) Gareth Bale is not here… because I was going to ask for his tracksuits and socks!

“You can see how much he means to the country and how much of an impact he makes every game. I just want that love he has.”