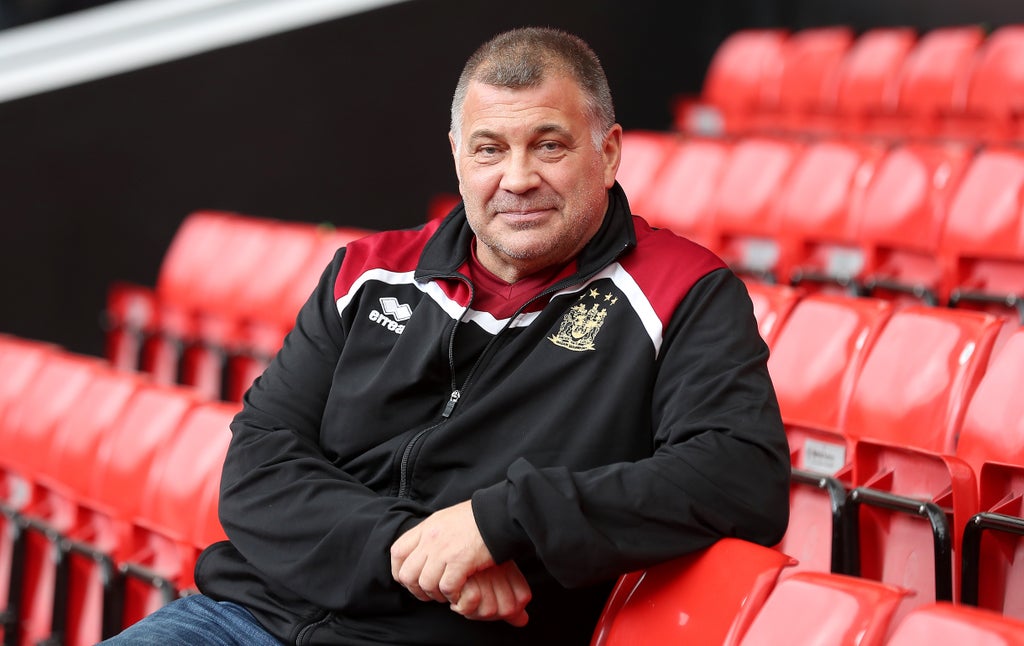 Peet has been promoted from his role of assistant to succeed Adrian Lam on a two-year contract, with an option for a third season.

At 37, he becomes the youngest head coach in Super League but will be able to call on Wane, who returns to Wigan in an administrative role while continuing as England head coach.

Peet has spent more than a decade at his home-town club, working in a range of coaching positions with the academy, reserves and now first team, all under the watchful eye of Wane.

“He’s a smart operator,” Wane said. “He a real student of the game. I read a lot but he reads the double the amount I read. He’s obsessive.

“He’s a bit off the radar but I’ve spoken to many Australian coaches and rugby union coaches and Matty is up there with the most knowledgeable sports coach I’ve seen.

“He’s very impressive. I’ve mentored him for years but I’ve learned more off him than he’s learned from me.

“He’s got two fantastic assistants in Lee and Lockers. It’s a fantastic set-up.

“Them three blokes will pick the team.”

Wane, who guided Wigan to three Grand Final wins, will combine his role as England head coach with that of leadership and management director of the Warriors and insists the job will have no impact on his preparations for the World Cup, which has been put back to next October.

“It’s a good fit,” Wane said. “I reckon I can add some value to the club and hopefully improve them.

“The RFL are OK with it. The more work the better, that’s what this lockdown has taught me. I need to keep busy. Nothing will be neglected.”

Peet was playing prop forward with Leigh reserves when he decided to hang up his boots at the age of 21 and concentrate on coaching “once I realised I wasn’t good enough to play Super League”.

He coached the England Academy for four years including the tour of Australia in 2016. At the end of 2018, Peet left his position as Warriors head of youth to join Sale Sharks as head of performance but returned to Wigan in May 2019.

Peet is grateful for the influence of Wane on his career and knows he will be now be on hand for any assistance.

“The effect he has had on me is second to none,” he said. “I feel this is the progression of that relationship. He will be there if I need him. He’s the perfect person for me to have at the end of the phone.

“He will hold me accountable to the culture, standards and respect which is what the club is built on.”

Meanwhile Briers, who has ended a 24-year association with Warrington, insists he will not have divided loyalties when his past and present clubs collide in 2022.

“As much as I love Warrington, Wigan is my new home and I’ll be putting every ounce of effort to make sure we win more games than we lose,” said Briers, who revealed he had no shortage of offers when Warrington decided to offload him.

“I was a long way down the line to going to the NRL, and rugby union was an option early on.

“It’s like public buses, none come and then they all come. I was in negotiations with other clubs but this just felt right.

“I have a strong relationship with Matty and we’re good friends as well. Warrington are still a massive part of my life but I’m a professional.”