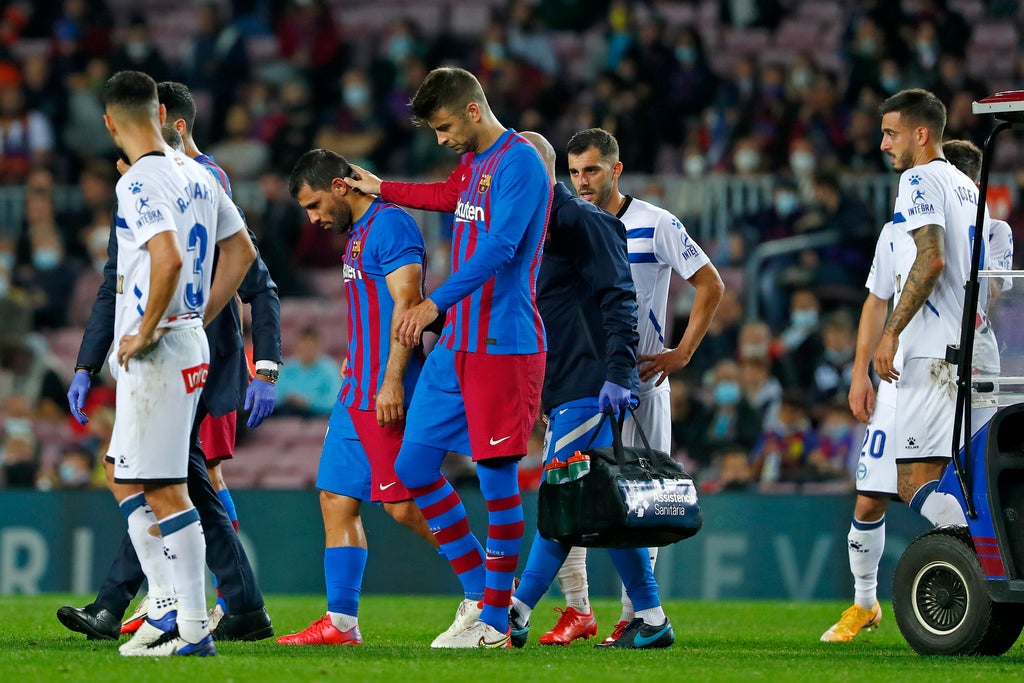 Sergio Aguero was forced off injured as Barcelona began life after Ronald Koeman with an uninspiring 1-1 draw at home to Alaves in LaLiga.

Memphis Depay put Barca ahead four minutes after half-time but the hosts were unable to fully bounce back from successive defeats to Real Madrid and Rayo Vallecano as Luis Rioja swiftly equalised.

Former Manchester City striker Aguero made his first start at the Nou Camp since his summer switch but his evening lasted just 41 minutes before he was replaced by Philippe Coutinho.

The 33-year-old Argentinian appeared to be suffering from breathing problems but managed to walk from the field.

Vinicius Junior claimed both Real goals, either side of Raul Guti being dismissed for a second bookable offence, before Pere Milla claimed the hosts’ late consolation.

Sevilla are level on points with Carlo Ancelotti’s men – and Real Sociedad – after strikes from Diego Carlos and Lucas Ocampos secured a 2-0 win over Osasuna, while Valencia defeated rivals Villarreal by the same scoreline thanks to Hugo Guillamon’s first-half finish and a Carlos Soler penalty.

In Italy, Juventus’ poor run continued with a surprise 2-1 loss at Verona.

Giovanni Simeone’s quickfire brace condemned Massimiliano Allegri’s side to a third game without victory, despite Weston McKennie halving the deficit late on.

Atalanta warmed up for another Champions League showdown with Manchester United by salvaging a 2-2 draw at home to Lazio.

Marten de Roon struck in injury time for the hosts after Lazio twice led through Pedro and Ciro Immobile, either side of Duvan Zapata’s initial equaliser.

Dennis Praet, Wilfried Singo and Andrea Belotti were on target as Torino won 3-0 against 10-man Sampdoria who had Adrien Silva dismissed.

In the Bundesliga, champions Bayern Munich bounced back from their midweek cup thrashing at Borussia Monchengladbach by winning 5-2 away to Union Berlin.

Robert Lewandowski’s double – one from the penalty spot – and goals from Leroy Sane, Kingsley Coman and Thomas Muller did the damage, with Niko Giesselmann and Julian Ryerson registering for the hosts.

In France, second-placed Lens failed to close the 10-point gap to Ligue 1 leaders Paris St Germain after losing 2-1 at Lyon.

First-half goals from Karl Toko Ekambi and Houssem Aouar were enough for the home side, despite Arnaud Kalimuendo pulling one back after the interval.

In the day’s other game, Wahbi Khazri earned bottom club St Etienne a 1-1 draw at Metz by cancelling out Farid Boulaya’s opener.