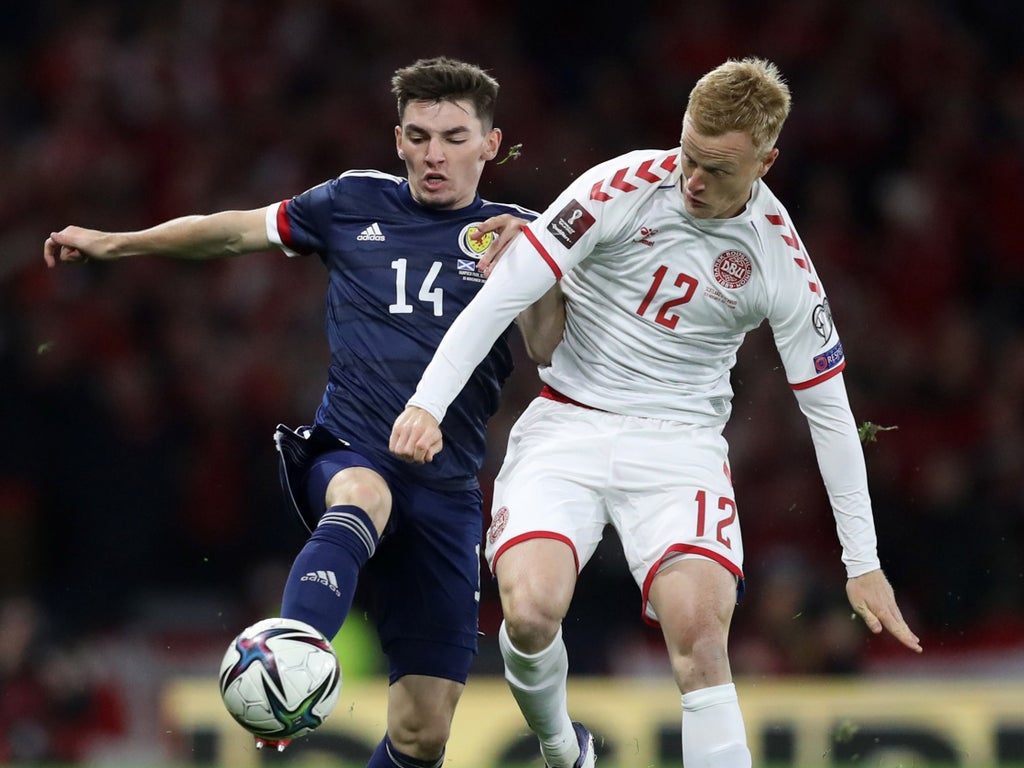 Scotland welcome Denmark to Hampden Park this evening as Steve Clarke’s side look to end their World Cup qualifying campaign on a high note, having already sealed a place in the play-offs ahead of next winter’s tournament in Qatar.

Scotland’s 2-0 victory over Moldova on Friday ensured Clarke’s team will finish in second place in Group F, with tonight’s opponents Denmark guaranteed to win the pool. The Danes have won all nine of their qualifying fixtures, having beaten Scotland 2-0 in Copenhagen back in September – though the scoreline could have been much more lopsided against the Scots. Still, this is no dead-rubber for Scotland, who are now aiming to finish as one of the six best second-placed sides, which would give them a seeding in next March’s play-off games. A result here could significantly boost Scotland’s hopes of achieving a home semi-final draw in those play-offs, so Clarke and his players will be keen for a sharp performance in front of the Hampden Park faithful this evening.

Scotland’s presence at Euro 2020 this summer marked their first appearance at a major tournament since the 1998 World Cup, so qualifying for Qatar 2022 would see them play at a world championship for the first time in 24 years.

38 mins: Aaaaaand breathe. That was a moment for all of Scotland to saviour.

But they have to stay alert as soon as play gets back underway. Maehle storms down the left and earns a corner for the away side, their first of the game.

It comes to nothing though. Scotland are defending absolutely superbly.

Scotland’s seventh corner presents an eighth and it’s from that one where the home side find the breakthrough!

McGinn swings it all the way to the back post and when it’s knocked back into the six-yard box John Souttar is there to flick home from close range!

34 mins: Big chance for Scotland! Denmark are pressing up the pitch and caught napping by the Scots.

It’s two-on-one as Robertson brings it down for Adams. The Saints man looks up and opts to shoot but it’s blocked behind by Kjaer. He should have given it back to Robertson! The Liverpool man was open inside the box. Wrong decision.

32 mins: Denmark just taking the sting out of the game a little as they knock it around at the back. Dare I say Schmeichel is already running down the clock in this first half?

If there is going to be a goal before the break, it is almost certainly going to come from the home team.

Denmark coach Hjulmand will know his team are in a dogfight here. They have been largely outplayed for the opening 30 minutes.

29 mins: Scotland on the march again! Robertson crosses from the left and it falls to McGinn whose shot is blocked behind for a corner – the hosts fifth already!

It’s swung in by McGinn and Kjaer has to get back on the goal line to preventing it going straight in at the near post!

28 mins: Jannik Vestergaard isn’t known for his distribution and his latest pass showcases why.

The Leicester defender tries to curl a sweeping ball towards the back post but it’s around 20 yards too deep.

Maybe he was picking out someone he knew in the front row? Benefit of the doubt.

26 mins: Few breaks in play here as a couple of cheap free-kicks and offsides are given.

Denmark composing themselves after a strong spell for the hosts.

As an Englishman, I endorse this.

Oh, what a move from Scotland. A lovely dinked ball finds Gilmour. He cuts it back for Christie who bundles it into the path of Adams but the Southampton man is denied by the outstretched leg of Schmeichel!