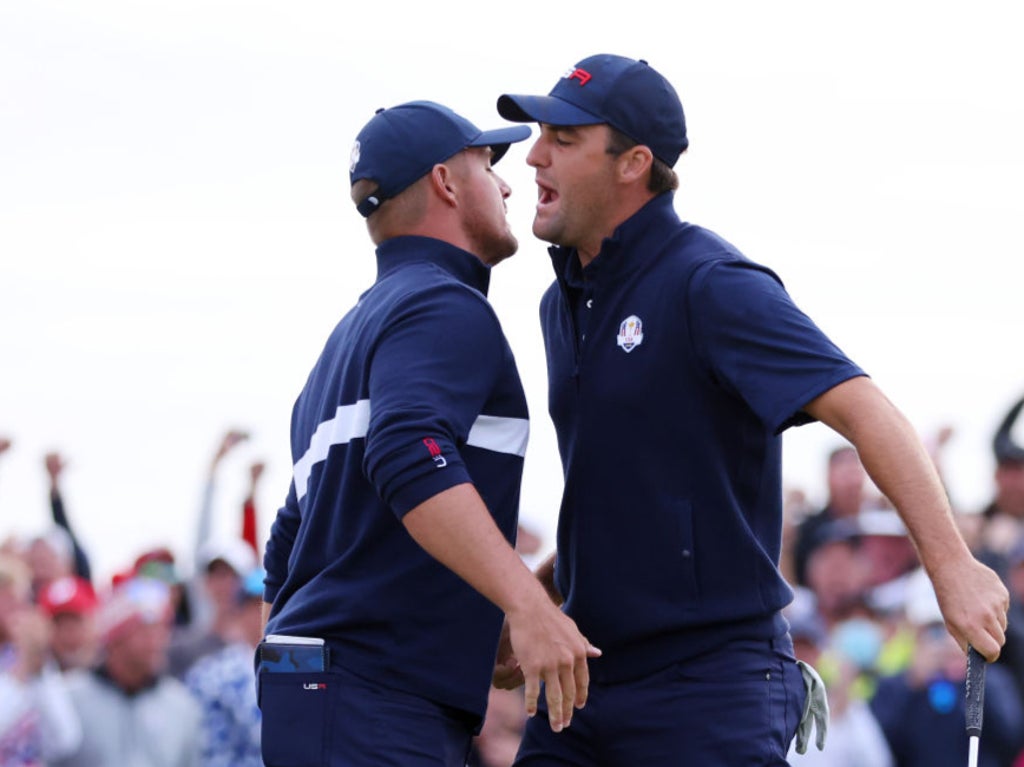 In search of a miracle after another landslide defeat in the morning session, Europe summoned all their remaining strength on Saturday afternoon at Whistling Straits, but their wearied hopes of retaining the Ryder Cup are in ruins.

There can be no dodging that dispiriting fate, even if the manner of their performance in the fourballs will provide a fragile consolation as Padraig Harrington’s side fought valiantly to take two points from the session. In truth, they had probably required a whitewash just to stand a chance in the singles, but those matches are now a matter of mere formality. The USA lead 11-5 and the antics of Justin Thomas, who drunk a beer in front of a raucous crowd in Wisconsin’s early afternoon, signalled the beginning of the celebrations that will continue late into Sunday evening.

At least, Europe can now take some valour from this defeat. Jon Rahm and Sergio Garcia, victorious again in the morning’s foursomes, remained together in the afternoon and took down Brooks Koepka and Jordan Spieth in stunning style. Shane Lowry carried an erratic Tyrrell Hatton for much of their match against Tony Finau and Harris English and the Irishman held his nerve in remarkable fashion to drain a tricky 12ft putt on the 18th to ensure Europe of a full point.

Their celebrations were emphatic, a portrait of perseverance in the jaws of defeat, but they were only punctuating moments and too many of Harrington’s leaders left him short this week. None more so than Rory McIlroy and Ian Poulter, who were dropped for the morning session and then utterly trounced by the formidable pairing of Dustin Johnson and Collin Morikawa in the afternoon, with McIlroy failing to make a single birdie. In each of his three matches, the Northern Irishman has failed to make it to the 16th tee and seemed a spectre of his old self. In the end, it left Europe damningly short of spirit, too.

There were still the vaguest remnants of hope remaining as Tommy Fleetwood and Viktor Hovland exchanged the ascendancy in a volatile final match against Bryson DeChambeau and Scottie Scheffler. Victory would have evoked memories of Medinah and left the score at 10-6. But this US team is unburdened by the scars of the past and their talent and brute force told down the stretch, winning three holes in succession to condemn Europe to an early demise.

Ultimately, that has been the tale of the week. The strongest US team in history have lived up to that mantle, with every player part of a winning match, and while Europe were at least able to halve the last session, they’ve never come close to breaking the stranglehold. The stage is set for Sunday, but it will be a procession rather than a shootout.

Amid all the superiority, the air of petulance and ill-tempered spats of the US team served to drain some of the grace from their dominance. Soon after Thomas’s over-egged beer-swigging theatrics, hurling an open can into the turf on the first tee and posing on one knee, DeChambeau was laying down his putter in indignation on the first green in evidence of the short length of a putt he believed should have been conceded. There was tension between Rahm’s caddie, Adam Hayes, and Jordan Spieth, too, after the American questioned the placement of the Spaniard’s penalty drop. “I didn’t raise my voice, buddy,” Spieth could be heard saying during a heated exchange before Rahm stepped in.

The fiercest outburst, though, was reserved for the final hour of the vital morning session that became Europe’s death sentence. Padraig Harrington’s side had started the day staring down the barrel of a 6-2 deficit and desperately needed to claw back the tide on Lake Michigan. Rahm and Garcia, Europe’s inspired and irrepressible Spanish duo, put them on that track after recovering from a dreadful start against Koepka and Daniel Berger. With the match poised on a knife-edge at the 15th, Koepka swore at two rules officials after being refused a free drop and said: “If I break my wrist it’s f****** on you.” He eventually hit a brilliant approach without making any contact with the drainage cover in question, but that could not stave of Rahm’s magnificence as his imperious putting closed out a 3&1 victory.

By the time that match was settled, though, it had already become clear that any flickering hopes of a European fightback were rapidly fading. Johnson and Morikawa had started in a blaze of birdies and fended off Paul Casey and Hatton’s late resurgence. Thomas and Spieth overcame a shaky start to outclass Bernd Wiesberger and Viktor Hovland, while Xander Schauffle and Patrick Cantlay were a supreme partnership once again, their quality far too great for a despairing Matt Fitzpatrick and Lee Westwood.

It left the score at 9-3 in the US’s favour heading into the afternoon and Harrington must have already feared that any hope of a heroic comeback had been lost. And as the sun set over Wisconsin on Saturday evening, that much was confirmed. There is barely a sliver of light for Europe to cling to, with the US requiring just three and a half points to seal their victory. It is inevitable and, even in the taste of bad blood, no less than what they deserve.