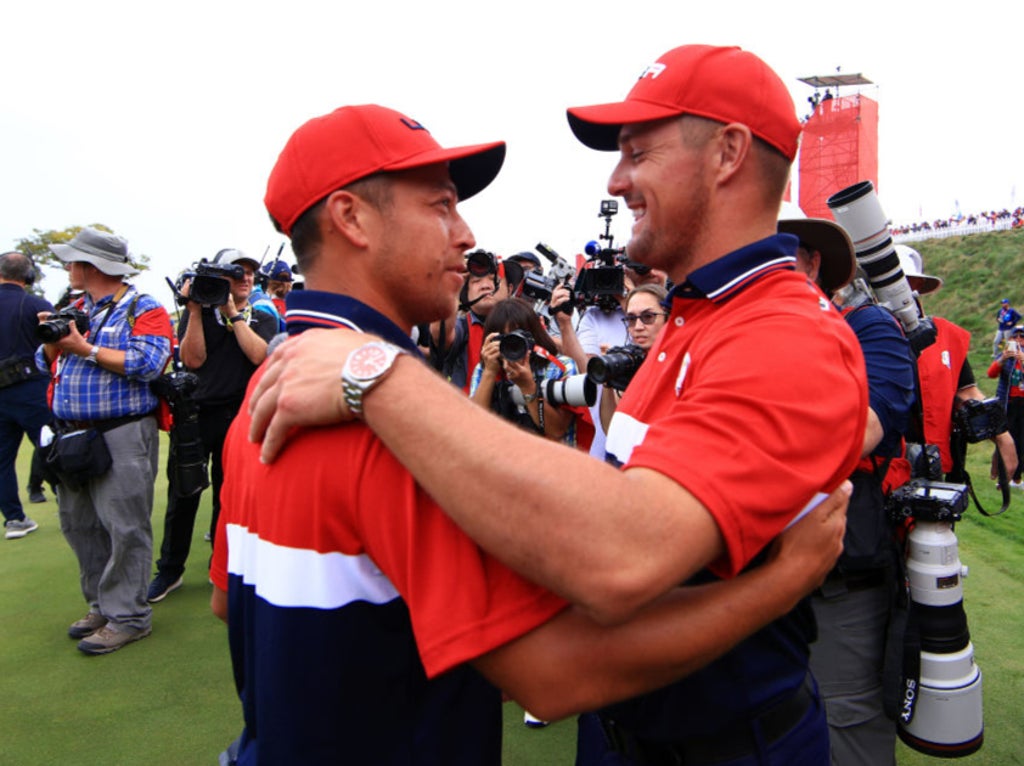 Europe’s defeat might have already been inevitable, but the Sunday singles at Whistling Straits amounted to a massacre far worse than imagined. The US were formidable and merciless, the final score of 19-9 a new and damning record, and the sight of Rory McIlroy reduced to tears illustrated the arresting nature of Europe’s drowned hopes on the shore of Lake Michigan.

It was Collin Morikawa whose half-point guaranteed the victory, but by that point, the result had long been confirmed as a formality. The celebrations that began with Justin Thomas drinking beers on the first tee on Saturday afternoon might have been graceless, but they were not premature. A raucous home atmosphere followed every group, the chants and cheers blurring into one as the scoreboard became draped in red, and although a valiant and highly charged McIlroy delivered the first emotional point of the afternoon, the US’s victory was sealed inside the first five groups.

Patrick Cantlay crushed a dogged Shane Lowry, Scottie Scheffler broke the resistance of Jon Rahm, whose consistent brilliance had already saved Europe from further embarrassment, and Bryson DeChambeau inflicted a first defeat of the week on Sergio Garcia. In the end, the only remaining matter of intrigue concerned whether it would be Morikawa or Dustin Johnson that savoured the highlight moment. And while it was the former who basked in that glory, Johnson’s contribution took on a rarefied air with victory over Paul Casey. The elder statesman of this vibrant young US team, he became just the third man in Ryder Cup history to play in and win all five matches. “Starting the week if you’d have told me I was going to go 5-0-0 I probably would’ve said you were crazy – I didn’t think I was even going to play five matches,” said the elder statesman of the US team. It was a great week, the team played amazingly, all of us came together and we wanted to win. I think we just wanted it a bit more.”

In truth, ambition was irrelevant on Sunday with Europe’s fate sealed long before they crumbled to a landslide singles defeat. Harrington’s side had been in need of more than just a miracle. In fact, after beginning the day with the death penalty of an 11-5 deficit, what was required amounted to a resurrection even Larazus would struggle to perform. And accordingly, it wasn’t long before even the most devout flickers of European faith were refuted by the irrepressible quality of this American side.

There will inevitably be post-mortems of Europe’s defeat. Shades of scepticism aimed towards Harrington and outright shadows cast over McIlroy and Ian Poulter’s lack of contribution. But regardless of those mitigating factors, the bottom line was that the youngest and best-ranked US team in history simply had too much quality to withstand. The six rookies in Steve Stricker’s side were imperious and infallible, unburdened by the scar tissue that corroded the previous generation’s subconscious. The true depths of their dominance will be tested further on away soil in 2023, but this victory certainly carries the threat of a new era.

With far too much ground already lost, after being routed 3-1 in the first three sessions, Harrington could only hope his team would fight with the same heart and valour as yesterday evening, when they were finally able to take even honours in the fourballs. In evidence of that, it was McIlroy who led from the front, urgently in need of vindication after three defeats in three. He began with a birdie and never surrendered the lead, bringing Xander Schauffele’s unbeaten rookie run to an end.

“I love being a part of this team and I wish I could have done more for them this week,” McIlroy said through tears afterwards. “I’m glad I put a point on the board for them but I just can’t wait to get another shot at this. I’ve never cried about what I’ve done as an individual, I couldn’t give a s***. It’s been a tough week but the more and more I play in this event I realise it’s the best event in golf bar none. No matter what happens after this I am proud of every single one of the players that played this week, I am proud of our captain and vice-captains.”

With victory already sealed, the points fell in an avalanche of red. Brooks Koepka almost stole Morikawa’s thunder, his tee-shot at the 17th just inches from an ace, but a birdie was enough to see off a game Bernd Wiesberger, who battled tooth and nail until the end. Thomas, the hysterical patriot of the US team, which is no mean feat when set against DeChambeau, savoured every moment of his emphatic victory over Tyrrell Hatton.

There was a full point for Poulter, who extended his unbeaten record in the singles with a typically stubborn performance, fending off the power of Tony Finau. But that will provide little consolation to the man who has so often been the heartbeat of the European team on what may well be his final appearance.

And while the American team celebrated around the 18th green, downing beers to the delight of the crowd as Steve Stricker held back the tears, it was hard to avoid the feeling that the sun was starting to set on one of Europe’s own. Lee Westwood is likely to captain the team in Rome in 2023 and, if that does prove to be the case, a full point was a fitting finale for a man who’s now represented Europe eleven times as a player. He has been a part of a generation who’ve written so many breathtaking moments into history, but as Daniel Berger ensured the US of a record-breaking margin of victory, there can be no hiding from the fact that a new Ryder Cup era beckons, ominously and emphatically.