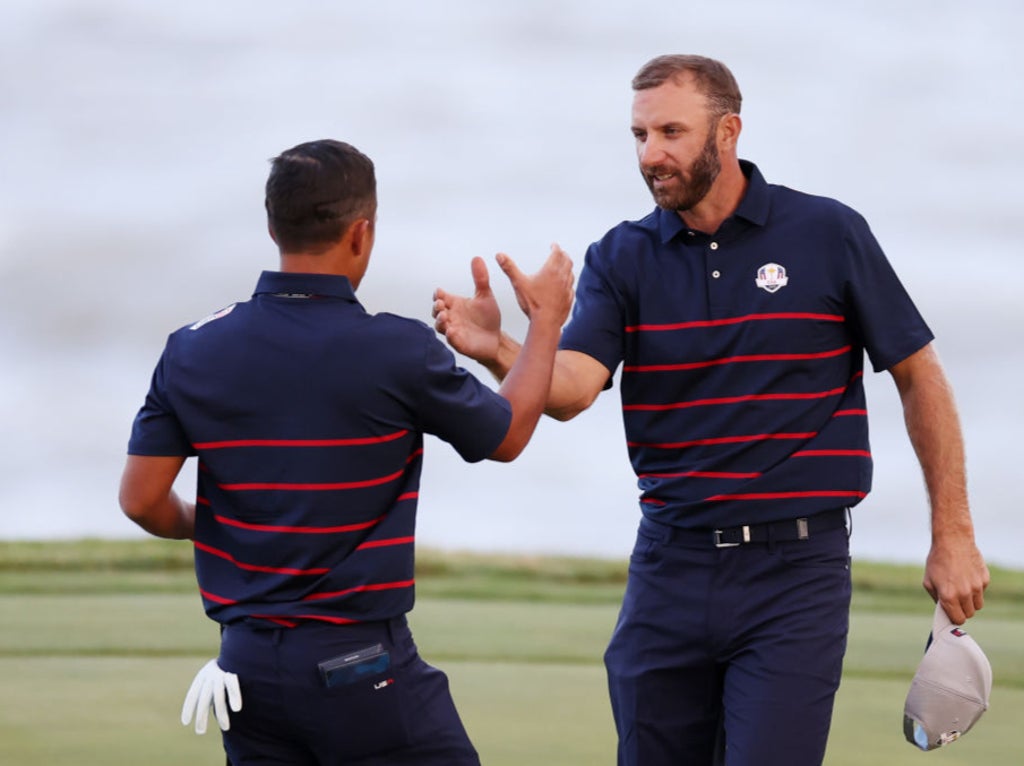 Blood was shed at Whistling Straits on Friday as a supremely talented American side tamed a howling wind and painted the scoreboard red. Just a day into the 43rd Ryder Cup, Europe’s defence hangs in grave danger, with Padraig Harrington’s team ruthlessly overpowered in two chastening sessions to leave them 6-2 down and, already, questions will inevitably be raised of whether too much ground has been surrendered.

Recent history had suggested Steve Stricker’s side – the strongest in Ryder Cup history on paper – would dominate the morning foursomes, and they lived up to those predictions with aplomb, seizing a 3-1 advantage as only the Spanish pair of Sergio Garcia and Jon Rahm managed to stave off the onslaught.

It left Europe in urgent need of a fightback in the afternoon fourballs, a feat they were able to procure so spectacularly in Paris three years ago. And although they did muster a sterner resilience, it could not hold back the certain tide sweeping the shore of Lake Michigan, with this US side unburdened by the scar tissue that has afflicted previous generations, and they were wholly worthy of their biggest day one lead since 1975.

Dustin Johnson and Xander Schauffle, inspired and irrepressible, took the momentum from their separate victories in the foursomes and combined as a fourball force Paul Casey and Bernd Wiesberger could not withstand. That point was secured just moments after Tony Finau and Harris English put a beleaguered Rory McIlroy and Shane Lowry out of their misery in a match that amounted to a one-sided trouncing.

That gave the US a 5-1 lead and pushed Europe towards an abyss. Rahm, the world No 1, was controversially separated from Garcia for the afternoon session, instead paired with Tyrrell Hatton, but the Englishman came up clutch in a hair-raising battle against Bryson DeChambeau and Scottie Scheffler. The former’s behemoth driving had regularly sent the home crowd into a state frenzy, and the US held a one-shot lead going down the 18th. But Hatton accounted for a fierce wind magnificently with a pinpoint approach and held his nerve with the putter to salvage a point that represented something closer to a lifeline for Europe.

In the final group, Tommy Fleetwood and Viktor Hovland had squandered an ascendancy that had stood at three shots and headed down the last level with a fired-up Justin Thomas and Patrick Cantlay. There was to be no hero in that group, though, as another point was halved to leave Europe’s defence in unmistakably dire straits. The US had lived up to their superior billing in every aspect and, although the race is far from run, their lead is as golden as the metal that lines Samuel Ryder’s trophy. Like the awestriking 417-yard drive that DeChambeau detonated on the par-5 5th earlier in the afternoon, it will take truly extraordinary fireworks for Europe to pierce the sky now separating them from their imperious hosts.

It was a scenario many had feared before the first tee-shot was met with a wild roar in the early morning in Kohler, Wisconsin. And yet, hope had burnt bright and begun with a spritz of blue when Rahm and Garcia, the Spanish duo out to evoke an emotionally charged history, led from the front, took the ascendancy and never faltered against a formidable US pairing of Thomas and Jordan Spieth. But soon, in tame morning conditions, the US would clear a path that would prove irrevocable.

No player will attract more lament for that fact than Rory McIlroy, who was paired with Ian Poulter for the foursomes. The pair were supposed to be Europe’s beating heart but struggled desperately to find any form of rhythm. It was almost disarming to see the way they were torn through by Californian close friends Xander Schauffele and Patrick Cantlay, who won the first five holes in succession. Rookies in name, but certainly not by nature, they were clinical and virtually faultless in the face of their unravelling opponents. McIlroy’s driver was volatile – and there will rightly be loud calls for him to be left out of Saturday’s foursomes – and Poulter’s putter ran cold. They made the turn in 39 and were trudging off dispiritedly by the 15th.

That had been the final match of the session, but the nature of their early collapse was contagious and set a tone, with roars of support going up in beacons around the course, acting like distress signals to European hopes. Swings of momentum back and forth became a permanent sway, even if Rahm and Garcia remained immune out in front, the former’s formidable putting ensuring Europe of victory at the 17th in spite of a miraculous flop shot by Spieth that will live long in th memory.

The Spaniards’ celebrations were to be solo ones, though. Brooks Koepka made light of those who’ve cast him as an unremitting individualist, teaming up excellently with rookie Daniel Berger. The pair took an early lead and rarely weakened their stranglehold over Lee Westwood and Matt Fitzpatrick, also closing out the match on the 17th green. That they were forced to wait so long, perhaps, did an injustice to their clear superiority for much of the contest.

A similar fate befell Casey and Hovland, even if they did proffer more resistance, briefly taking a lead over Johnson and Collin Morikawa on the front nine. The American pair, though, were not only as phenomenal as their individual records suggest – both two-time major champions, albeit at vastly different stages of their careers – but a perfect marriage of power and precision, their characters calm and unflustered. They finished off a 3&2 victory on the 16th and looked ominously closer to their peaks.

Those were traits that, in truth, could be found in all the twelve players who spurred the US to their commanding ascendancy. They have made fast starts in the past and then faltered in the afternoon, but the immense quality of this American team runs deep – as became clear with the likes of DeChambeau and Finau looming in reserve. There are still 20 points to be won, lost or halved before the final group finish up on Sunday evening. And yet, the emphatic nature of Team USA’s performance will have confirmed Padraig Harrington’s worst fears. He has some brave calls to make overnight, but even then, it will take something truly remarkable for Europe to escape such dire straits.