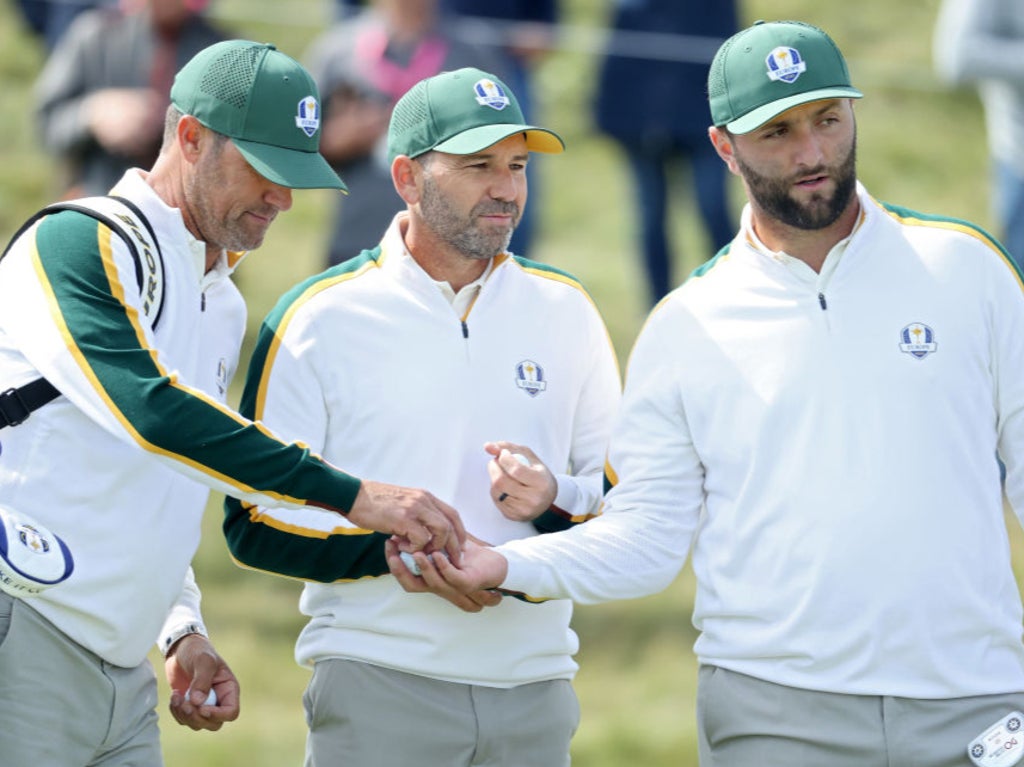 Follow all the latest action as the 43rd edition of the Ryder Cup finally gets underway at Whistling Straits.

Team Europe are defending the trophy after their triumphant victory at Le Golf National in 2018, however, they arrive on the shore of Lake Michigan as clear underdogs against one of the strongest American sides in memory. Steve Stricker’s Team USA contains eight of the world’s top 10 players and an abundance of major winners, although Europe still boast the best-ranked player of all in Jon Rahm. There remain questions, as ever, over whether the US team will be able to function as a unit, too, as Bryson DeChambeau and Brooks Koepka’s feud simmers in the background.

The pairings for the foursomes were announced by Striker and Padraig Harrington at the opening ceremony last night and the morning’s play will begin with a tantalising match-up between the formidable US pairing of Jordan Spieth & Justin Thomas against Spanish duo Jon Rahm & Sergio Garcia. The second match sees Dustin Johnson & Open champion Collin Morikawa take on Viktor Hovland & Paul Casey before Koepka & Daniel Berger challenge Lee Westwood & Matt Fitzpatrick. The final match of the first session pits Patrick Cantlay & Xander Schauffele against Europe’s heartbeat of Ian Poulter & Rory McIlory. Follow all the latest updates below:

Ryder Cup 2021: The strongest US team in history

Ryder Cups are famously never dictated by world rankings, but the strength of this US team cannot be ignored. In fact, by that measurement, this is the best team the Americans have ever fielded, featuring eight out of the world top 10 and an abundance of major champions.

We’re less than half an hour away from our first foursomes match and what a brilliant spectacle it promises to be. Jordan Spieth and Justin Thomas are a formidable pairing, close friends with brilliant records in the Ryder Cup. Sergio Garica, though, boasts more winning points than this entire US team combined. He is paired with fellow Spaniard and world No 1 Jon Rahm, who memorably defeated Tiger Woods in the singles in Paris. What a show we have in store.

US captain Steve Stricker said he had not tried to work out which European players would be paired together, but had expected Jon Rahm and Rory McIlroy to feature in the first and fourth matches.

“I feel great about our pairings, some teams that have played together over the years, whether in the Ryder Cup or Presidents Cup,” Stricker said. “We are really excited about how these guys are playing and the order they are going out.”

Former US Open champion Bryson DeChambeau was among the players to sit out the opening session but Stricker said no players had expressed any disappointment about his plans.

“These guys have been incredible,” he added. “I can’t stress that enough. It’s about the communication we have had, being upfront with them and letting them know what we are thinking so there are no curveballs.

“We have heard it multiple times from all the players, if you want to play me once or all five, that’s up to you, just so we can try to win this cup.”

Europe captain Padraig Harrington hailed his side’s strength in depth after leaving Tommy Fleetwood and Shane Lowry out of the opening session.

Fleetwood won all four of his matches together with Francesco Molinari in Paris, but with the Italian not making the team for Whistling Straits three years later, Fleetwood joined former Open champion Lowry in sitting out Friday’s foursomes.

“That says a lot about our team that he is comfortable after going 4-0 and can look around his team and be confident that there are other people that are taking up that strain,” Harrington said of Fleetwood.

“I want every player on my team absolutely dying to play every match. But I want them to also understand that there are other people in the team, they have to step aside, and they have done that brilliantly.”

Ryder Cup 2021: What makes a winning captain? It’s not an exact science

In the early hours of Sunday morning in Brookline, knowing his flagging team were staring down the barrel, Ben Crenshaw played his Hail Mary. He called his close friend, George W Bush, then the governor of Texas, to deliver a speech to those in the fractious and frayed US locker room. And so, with the players waiting quizzically, Bush read aloud a letter sent by Colonel William Travis before the Battle of the Alamo, replete with pledges to “to never surrender or retreat”.

A few minutes later, after his final three words – “victory or death” – Bush promptly walked straight out the door without a moment’s hesitation. Overcome by hysterical patriotic pride, what followed amounted to a sporting massacre as the Americans won all of the first six singles matches and completed one of the most remarkable and contentious comebacks in Ryder Cup history. “I’ve never seen such firepower going out,” Crenshaw said afterwards, his clothes stained by champagne, as his players waved US flags from the balcony.

There’s an opening gambit Graeme McDowell likes to tell at the many corporate days he’s had to attend over the last decade. “In the American team room, they’d have three ping pong tables,” he says, with a little theatric suspense, “… and we’d have a bar. People laugh but it’s actually true. We’d have a couple of beers, shoot the s***, and naturally built that camaraderie.”

It might seem a somewhat rose-tinted, helpfully inebriated insight into what binds Team Europe, but few themes have become as tendentious and synonymous with the Ryder Cup as team spirit. It’s the elixir that’s given life to famous upsets and infamous falling-outs, intoxicating champagne celebrations and segregated pod systems. An inherently European advantage cited with almost religious devotion, even by the staunchest non-believers.

Ian Poulter has been candid from the outset this week: “I’m sure I’ve annoyed plenty.”

A maverick for Europe over the years, Poulter lines up with Rory McIlroy to face Patrick Cantlay and Xander Schauffele.

“It was like a theatre, it felt like the fans were right on top of you,” Patrick Cantlay says, reflecting on the riveting chaos on the 18th green at Caves Valley Golf Club. Needing a birdie to extend the tournament into sudden death, with the crowd’s bated breath like lead in his shoes, he shuffled over the snaking 22ft putt that amounted to the most important shot of his career. Statistically, what followed should have been implausible, a feat of brazen impudence in the face of immense pressure. Instead, Cantlay’s ball gathered pace with utter certainty, like a bullet fired in cold blood, and left the raucous gallery in Maryland gaped in shock and awe.

Cantlay’s battle with Bryson DeChambeau – his teammate at this week’s Ryder Cup – was still far from won, their playoff descending into a momentous six-part drama of its own deep into twilight, but that putt was the spark to the fireworks that followed: winning the Tour Championship the next week, accruing over $15m in prize money, and being named the PGA Tour’s player of the season. But even knowing all that, the softly spoken Californian expects the febrile atmosphere of his first tee shot at Whistling Straits to be unlike anything he’s ever experienced before. “The fans at the BMW were the wildest I’ve seen since Covid. It felt like they were on my side and to pull off those shots, it was amazing, it made it all the more satisfying,” he says. “But from everything I’ve been told, the Ryder Cup is completely different. I’m expecting a much bigger stage and more excitement than I’ve ever felt before playing golf.”

Europe have been on the charm offensive this week.

In Green Bay Packers country, Europeans have been wearing ‘Cheeseheads’ out on the course.