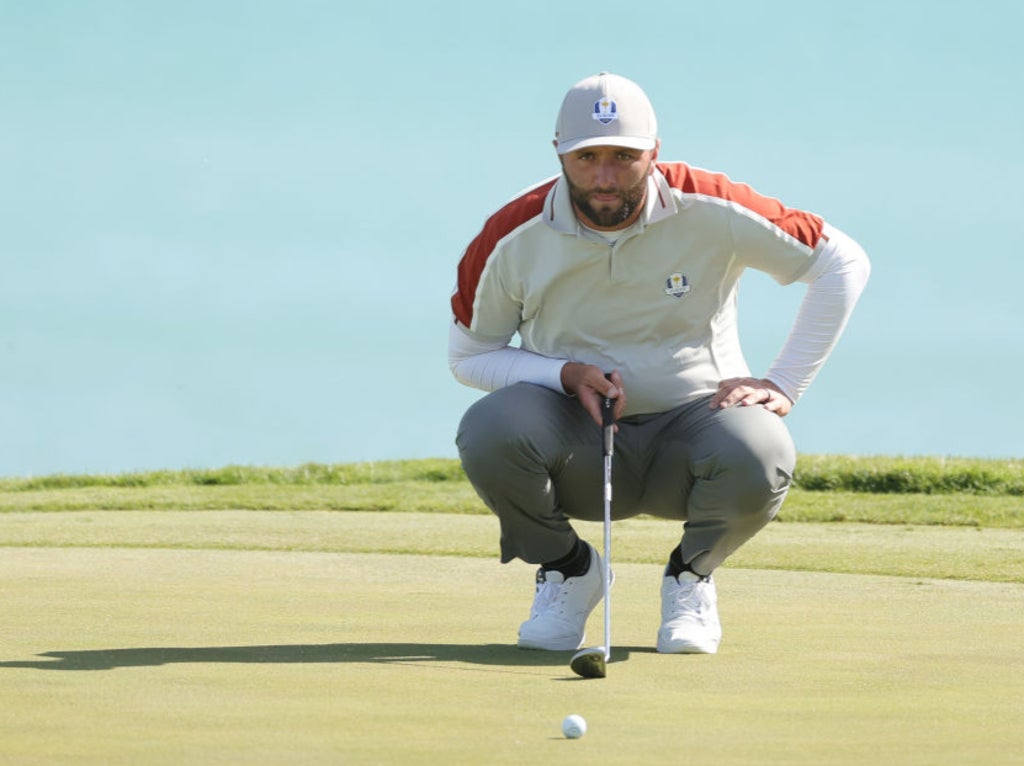 Follow all the action as Europe attempt to pull off the greatest comeback in Ryder Cup history at Whistling Straits on Sunday.

Padraig Harrington’s side head into the singles 11-5 down, despite a valiant display yesterday afternoon to take two points from the fourballs. Jon Rahm and Sergio Garcia were magnificent once again and have won all three of their matches together, while Shane Lowry holed an immense 12ft putt on the 18th green under extreme pressure to secure a full point for Team Europe. The damage, in truth, though, had already been done after the USA dominated the morning foursomes once again, taking the session 3-1 to leave Europe staring down the barrel of a lopsided defeat. That much was apparent when Justin Thomas began drinking a beer and celebrating in front of the grandstand on the first tee.

It means the USA require just three and a half points from this afternoon’s 12 matches to claim victory. The opening match pits Olympic champion Xander Schauffle (3-0) against an offbeat Rory McIlroy (0-3). Bryson DeChambeau faces Sergio Garcia in another tantalising match-up, while Dustin Johnson will attempt to go 5-0 for the week when he faces Paul Casey. Follow all the latest updates from all 12 matches live below:

Where will Europe’s wins come from? Here are the odds for the singles matches, via Betfair:

“In search of a miracle after another landslide defeat in the morning session, Europe summoned all their remaining strength on Saturday afternoon at Whistling Straits, but their wearied hopes of retaining the Ryder Cup are in ruins.”

Tom Kershaw provides the rundown from yesterday’s action in the Ryder Cup, ahead of today’s singles matches. It will require an almighty effort, and no small measure of fortune, for Europe to turn this one around.

Tony Finau warned Europe’s players they will be shown no mercy as the United States targeted a comprehensive Ryder Cup victory at Whistling Straits.

Steve Stricker’s side took an 11-5 lead into Sunday’s 12 singles matches and required just three and a half points to win the biennial contest for only the second time since 2008.

But Finau revealed he and his team-mates had no intention of settling for simply securing the win after previous US sides were beaten by record nine-point margins in 2004 and 2006.

“I don’t think it gets talked about enough in the Ryder Cup (but) sometimes your job, when you have a healthy lead like this, (is to) just wear out some of the great players,” said Finau, who was drawn to face European talisman Ian Poulter in the singles.

Here is a reminder of the tee times for this afternoon’s singles matches. The US require just three and a half points to seal victory at Whistling Straits, where Europe must attempt to pull off one of the greatest comebacks in golf history.

Sign up to our free sport newsletters to your inbox

Sign up to our free sport newsletters for regular updates straight to your inbox. Whether you would like a weekly rundown direct from our chief football writer Miguel Delaney or you want weekly sport digest from our sport editor Ben Burrows, or you want all the latest tips for your Fantasy Football game from our resident expert Mark Critchley, you can sign up by clicking here and scrolling to the sport section.

USA all but condemn Europe to defeat with dominant foursomes display

The final hour of a vital third session at Whistling Straits all but ended in a death sentence for Europe’s defence of the Ryder Cup and even those clinging to the most delirious optimism can harbour little hope of a comeback.

DeChambeau labelled ‘classless’ for complaints over putt not being conceded

Bryson DeChambeau was branded “classless” after appearing to complain about a European decision not to concede a putt early in his Ryder Cup fourballs match on Saturday.

The American playing alongside Scottie Scheffler, was left with a short putt to halve the opening hole after Viktor Hovland missed a chance to give himself and Tommy Fleetwood an early lead.

DeChambeau duly rolled the ball into the hole but did not seem happy that he had been made to do so as he laid his putter on ground after taking his shot.