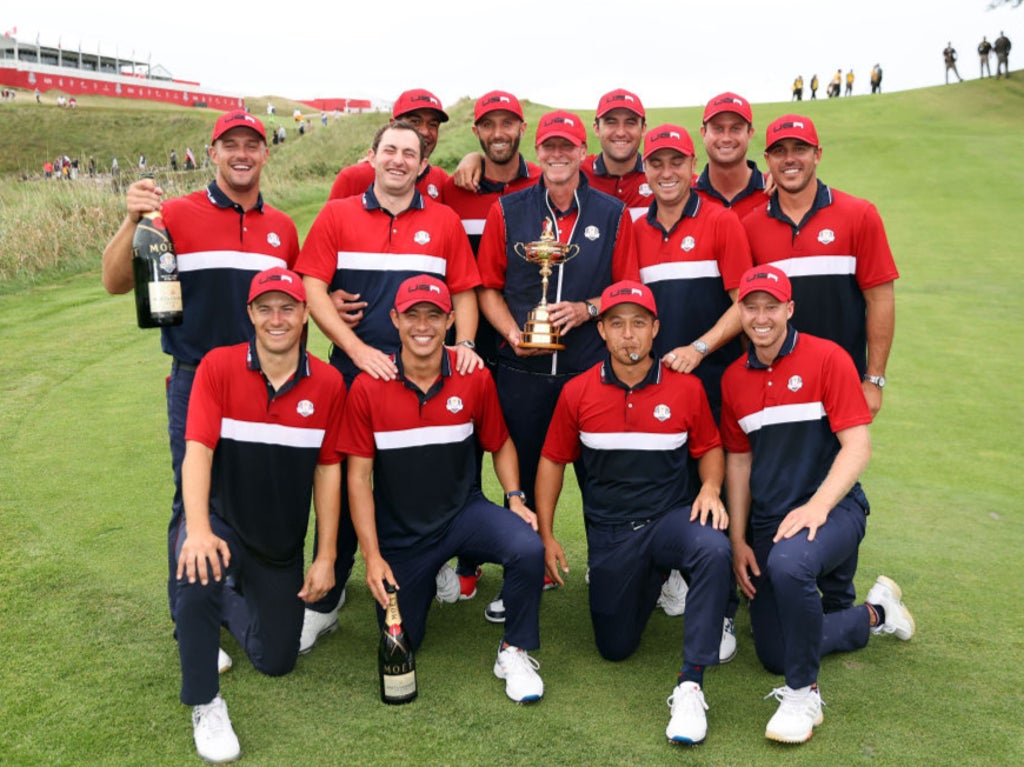 The smoke curled from the tip of Xander Schauffele’s cigar and circled into the air of suffocating dominance that had loomed over Whistling Straits. The first group off the course on Sunday afternoon, the Olympic champion had spent two hours soaking in the USA’s inevitable victory, leading chants and downing beers on one knee as the Sunday singles descended into a record-breaking slaughter, the giant scoreboard above the 18th green awash with red. A little fuzzy by the time he fielded the first question at the winners’ press conference, he leant on the cliche that had been recited religiously weeklong. “One thing that we all have in common is that we all hate losing,” he said, as his teammates giggled in groups beside him.

It was a statement that had felt more like a fragile peace treaty when a simmering American team convened in Wisconsin a fortnight ago. Past alliances have famously proven paper-thin and been laced with gunpowder, with Phil Mickelson and Patrick Reed the Machiavellians only too happy to ignite the flames. But it was hard not to sense a genuine shift as the sun set over Lake Michigan on Sunday evening. A well-oiled Dustin Johnson, the oldest member of the US team, who became only the fifth player in history to win five points, held court and promised to get matching tattoos with captain Steve Stricker. Schauffele bemoaned starting to sober up and then burst into hysterics with Patrick Cantlay after realising the press conference was being live-streamed. Even Brooks Koepka and Bryson DeChambeau high-fived and hugged before the cameras were shut off and the celebrations could start again.

But while few serious words were able to permeate their way through the boozy haze, with any serious questions deflected with dull platitudes, a more distinctly sober Jordan Spieth took the microphone without prompt and briefly changed the tone with an ominous warning for the European team. “I think that this is unfinished business,” he said as a relative veteran of the team, having now played in four Ryder Cups. “I think this was one of those first wins – we needed to win this one and I think it was a massive stepping stone for this team and the group … It’s one thing to win it over here, and it is a lot easier to do so. It is harder to win over there.”

Spieth had been one of those American players forced to stand and watch Europe’s equally intoxicated celebrations in Paris three years ago and, unlike the six cocksure rookies in the US locker room, he knows intimately the intense drain and despondency that reduced Rory McIlroy and Lee Westwood to tears in the shadow of the 18th green. But aside from the US team’s immense talent – the best in Ryder Cup history by way of world ranking – that lack of scar tissue is precisely what makes them a force seemingly impossible to withstand. They may still not embrace a collective mentality quite like the Europeans, whose own press conference embodied friendship in defeat, but the majority of this US team have known each other since they were teenagers and proved able, if only for a week, to align their egos for the sake of group success. “I woke up this morning and told the guys, let’s get to 20 points,” Cantlay said after thrashing Shane Lowry 4&2. “Because this is gonna be the next era of guys for the US. I wanted to send a message.”

It has been received with a certainty that promises not to diminish. Eight of the 12 US players are still in their twenties, already boast six major championships between them, and will surely only keep improving. Collin Morikawa, whose half-point guaranteed the US’s victory just five groups into the Sunday singles, accounts for two of those and is the youngest at just 24. And when they arrive in Rome to defend the trophy in 2023, it is entirely possible that at least nine of the dozen remain unchanged. It’s a generational shift, unburdened by the imposing auras of Tiger Woods and Mickelson, and it is hard to imagine a force of gravity capable of derailing their new reign of dominance. “If we play like we did this week, the score will look the same over there in a couple of years, and that’s what we’re here for,” Spieth said.

Europe will fiercely object to that and no advantage at a Ryder Cup has proven so valuable as home soil. But there can be no escaping the fact that Padraig Harrington’s attempts to keep the torch from passing was partly at fault for his side’s raze to ashes. After bitterly disappointing on Friday and Saturday, Ian Poulter and Lee Westwood battled valiantly to win their singles matches in a fitting finale for two men who’ve given so much to the European dressing room and leave behind giant shoes to fill.

Much of that responsibility will fall on the shoulders of Jon Rahm, who was relentlessly spectacular in the first four sessions, while McIlroy must find a way of channelling his passion for the Ryder Cup into consistently positive results. There is a fine core of players, from the impressive Viktor Hovland to the impassioned Lowry, that can be mainstays of the team for several years to come and the Marco Simone Golf and Country Club will be specifically tailored to reward precision over power, but those attributes still pale in comparison to the astounding quality and depth at the US’s disposal. Their rowdy celebrations continued long into a woozy dawn in Wisconsin and, if they are able to reproduce such phenomenal performances on the road, this US side will surely savour nights like these for much of the next decade.