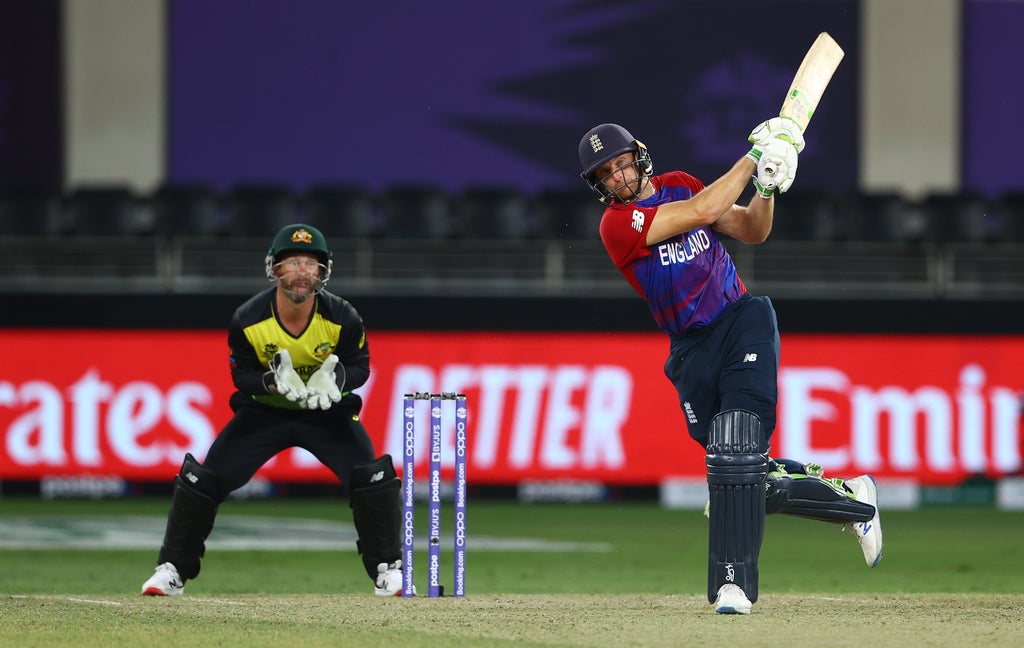 This was no Ashes precursor, nor a marker of things to come. Because, quite simply, England won comfortably, as expected.

They chased Australia’s score of 125 like it was an affront, doing so with 50 balls to spare to win by eight wickets. If there was any message sent, it was for here and now rather than Brisbane in December. No one is winning as convincingly as England: this being a third in a row to give them six points at the top of Group 1 with an astonishing net run rate hovering just below four. Qualification for the semi-finals is all but in the bag with two games still to play.

Chris Woakes and Chris Jordan set them up, then Jos Buttler knocked them down, picked them back up, knock them down again, then picked them up again and beat them some more. Woakes’s two for 23 stunned Australia’s top order, before Jordan returned to form through the middle of the innings with three for 17. Then Buttler happened.

A brutal 71 from 32 deliveries featured 10 boundaries, half of which were sixes. Each one seemed bigger than the last: a 95m effort off one of the best white ball bowlers in Mitchell Starc was his third, the ball after he went 92m with his second. That was then trumped when he took Adam Zampa down the ground for 102m which took him to 55 from 25 – a 15th score above 50 in the format.

Much like the 2019 World Cup semi-final, Woakes used a hard surface to jag deliveries off the seam. Talk of David Warner returning to form with 65 against Sri Lanka a couple of days ago was trashed as he was snicked off with just one to his name. Similar movement then did for Glenn Maxwell, beaten on his inside edge attempting a heave to the leg side and trapped LBW.

Woakes finished the Power Play with the rather absurd figures of two for seven from his first three over, plus a smart one-handed catch over his head running backwards after Jordan had elicited a mistimed pull from Steve Smith. With three prime batters gone for just 21 scored, and then Marcus Stoinis joining them in the dugout after falling (yet again) to a Adil Rashid googly with the first ball of the seventh over (21 for four), the match was basically done.

England named the same XI and chased for the third match in a row, then repeated their well-honed trick of smothering a top order intent on blitzing. In this instance, Australia were limited to just 21 for four in their Power Play, and 41 for four after 10 overs in which they only managed two boundaries.

The only difference this time was Rashid opening the bowling with his leg spin ahead of Moeen Ali’s off breaks. In fact, Moeen was not needed at all: Liam Livingstone (one for 15) got through his full set of four overs for the first time in his 11 appearances. We still did get a sight of some off-spin: Livingstone parking his leggies to remove Matthew Wade, caught at long off by Jason Roy.

Then came a fightback, as Ashton Agar struck a run-a-ball 20 in a partnership of 48 in six overs with Aaron Finch, who had survived the early onslaught. Agar struck the first two sixes of the innings, consecutively, to ruin Woakes’ figures – his final over cost 20 – before timing one perfectly to Livingstone at cow corner off Tymal Mills.

That brought Pat Cummins to the crease who served up another couple of sixes off his first two deliveries to take Australia into three figures and then to 110 with 12 balls of the innings remaining. However that impetus was snuffed out by another two-in-a-row: Finch (44) caught by Jonny Bairstow at wide long off and then Cummins yorked right after. Both to Jordan who finished with a quite brilliant three for 17.

Mitchell Starc’s blitzed 13 from six meant positions six to 10 had outscored the top five by 64 to 61. And their most meaningful work was just going to begin. Little did they know if would be nothing but punishment.

Buttler and Roy (22) took just 15 balls to better the first innings Power Play, reaching 24 for no loss with a glorious strike from Roy as he charged Agar and swotted him into the stands at midwicket. The pair eventually made it to 66, registering the highest Power Play of the World Cup so far. The four sixes out of seven boundaries between them as indicative of their proactive approach as the trio of threes they ran during this period.

Buttler then made a beeline for the target of 126, doing so with the kind of gusto that meant Roy’s dismissal two balls into the seventh over (LBW to Zampa) and Dawid Malan falling to Agar’s left-arm orthodox (caught behind for eight) were negligible. Bairstow then got in on the act, striking Zampa for a six over long on and then slog-sweeping him into the crowd at midwicket. Buttler watched on, having started the over with the last of his sixes, as 20 were taken to leave seven needed from the final nine overs.

They came in just four balls, albeit in subdued fashion with four leg byes and three singles. But Australia had been beaten long before, their players little but sweat covered husks as England greeted victory with little more than handshakes and a “well done” as the more partisan celebrations continued around them in the Dubai Sports City Stadium and beyond.

There is still much to be done for England to confirm their short form brilliance with silverware. But Saturday confirmed they are a team to be feared and, above all else, one not to be taken for granted. A once-in-a-lifetime outfit regularly doing spectacular things.