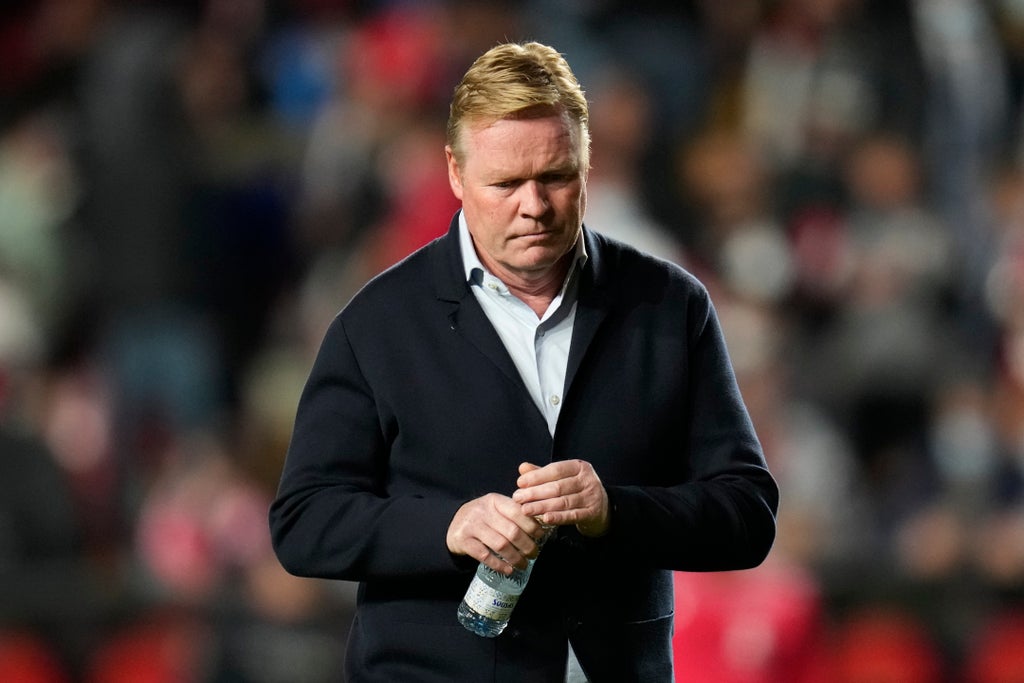 Koeman’s misery was compounded when Memphis Depay missed a penalty with 18 minutes remaining.

Barcelona are ninth in LaLiga, six points behind leaders Real Madrid who were held to a surprise 0-0 draw at home to Osasuna.

Elsewhere on Wednesday night, Borja Iglesias scored a double as Real Betis thrashed Valencia 4-1, while ex-Tottenham winger Erik Lamela came off the bench to salvage a 1-1 draw for Sevilla at Real Mallorca.

Bayern Munich suffered their heaviest defeat in more than three decades after Borussia Monchengladbach secured a stunning 5-0 win in the second round of the German Cup.

Kouadio Kone opened the scoring for the hosts with just two minutes gone. Ramy Bensebaini netted his side’s second on the quarter-hour mark before converting a penalty six minutes later.

Breel Embolo then scored a second-half double to inflict on Bayern their biggest loss since 1978.

It also marked the club’s heaviest defeat in the German Cup, the end of their 85-match consecutive scoring streak, and only the second loss of Julian Nagelsmann’s reign.

In Serie A, Maxime Lopez struck in stoppage time as Sassuolo secured a surprise 2-1 win at Juventus.

Davide Frattesi opened the scoring for the visitors in the first half before Weston McKennie headed the Old Lady back on level terms after 76 minutes.

But despite pressing for a winner, Juventus were caught out in the closing moments when Lopez scored on the break to steal a shock three points for Sassuolo.

Federico Dimarco and Danilo D’Ambrosio were both on target for Inter Milan in a straightforward 2-0 victory at 10-man Empoli.

Dimarco netted after 34 minutes before Samuele Ricci was shown a straight red card in the opening exchanges of the second half. D’Ambrosio made sure of the three points with a cool finish with 66 minutes played.

Roma struck in seven second-half minutes to complete a 2-1 turnaround at Cagliari.

Jose Mourinho’s side fell behind when Leonardo Pavoletti scored for the hosts after 52 minutes.

But Ibanez and Lorenzo Pellegrini spared Mourinho’s blushes when they found the target after 71 and 78 minutes respectively.

Pedro scored in a 1-0 home win for Lazio against Fiorentina. In the night’s other fixtures, Udinese and Hellas Verona drew 1-1, while Atalanta came from a goal down to win 3-1 at Sampdoria.

Nice hosted the match without fans at Stade de l’Aube in Troyes after their encounter in August was abandoned following crowd trouble.