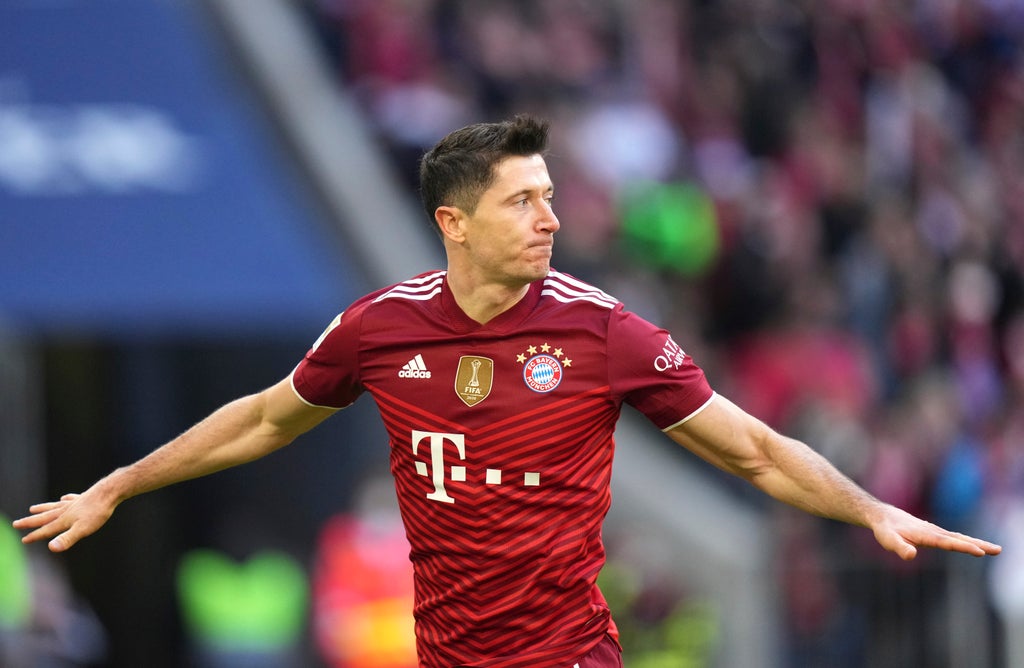 Bayern, with manager Julian Nagelsmann absent through illness, were in front after just 16 minutes through Serge Gnabry who had already seen an earlier effort chalked off for a foul.

Poland frontman Lewandowski then fired in his 10th league goal with a fine 20-yard effort on the half-hour.

With eight minutes left, substitute Eric-Maxim Choupo-Moting turned in a third following a corner. Corentin Tolisso’s goal was ruled out before Kingsley Coman wrapped things up late on.

Bayern remain a point clear of Borussia Dortmund, who won 3-1 at Arminia Bielefeld.

Emre Can put the visitors, missing injured forward Erling Haaland, ahead with a 31st-minute penalty and defender Mats Hummels added a second with a fine volley just before the break.

Branimir Hrgota put the visitors ahead from the penalty spot just before half-time, only for substitute Yussuf Poulsen to equalise shortly after the restart.

Emil Forsberg slotted in a 53rd-minute penalty, with Dominik Szoboszlai and 18-year-old substitute Hugo Novoa also on the scoresheet.

Freiburg won 2-0 at Wolfsburg with goals from Philipp Lienhart (27) and Lucas Holer (68) to move up to third while Marco Richter’s goal gave Hertha Berlin a 1-0 home win over Borussia Monchengladbach.

Zlatan Ibrahimovic scored for both teams as AC Milan went top of Serie A with a 4-2 win at nine-man Bologna.

A deflected effort from Portugal international Rafael Leao put the Rossoneri ahead. Defender Adama Soumaoro then saw red for a professional foul and Davide Calabria doubled Milan’s lead before the break.

The Rossoblu, though, rallied and pulled a goal back at the start of the second half when Ibrahimovic flicked a corner into his own net and the in-form Musa Barrow equalised.

Bologna then had Roberto Soriano dismissed for a bad foul on Fode Ballo-Toure which proved costly as late goals from Ismael Bennacer and Ibrahimovic put Milan a point ahead of Napoli, who play at Roma on Sunday.

Earlier, Sassuolo came from behind to beat Venezia 3-1 while Empoli ran out 4-2 winners at bottom club Salernitana, who had sacked manager Fabrizio Castori earlier in the week.

Andrea Pinamonti scored twice, the first inside 90 seconds and then from the penalty spot just before half-time after the visitors had raced into a 3-0 lead inside the opening 13 minutes.

Valencia scored twice in stoppage time to earn a 2-2 draw against Mallorca, who also finished with nine men, in their LaLiga clash at the Mestalla.

Angel Rodriguez had put the visitors in front with an own goal from Mouctar Diakhaby, given following a lengthy VAR review, doubling the lead just before half-time.

As tempers boiled over following the final whistle, Mallorca had both Antonio Sanchez and Rodrigo Battaglia shown red cards.

Joselu scored twice as Alaves put and end to their poor form and secured an impressive 2-0 win away at fellow relegation battlers Cadiz.

Dario Benedetto struck a late equaliser as Elche fought back to draw 2-2 against Espanyol in Alicante.

In Ligue 1, defending champions Lille were held to a 1-1 draw at home by strugglers Brest.

Jonathan David put Jocelyn Gourvennec’s side in front, but Romain Faivre equalised before the break.

Earlier, Nantes beat Clermont 2-1 at Stade de la Beaujoire, where both teams had a man sent off during the first half.