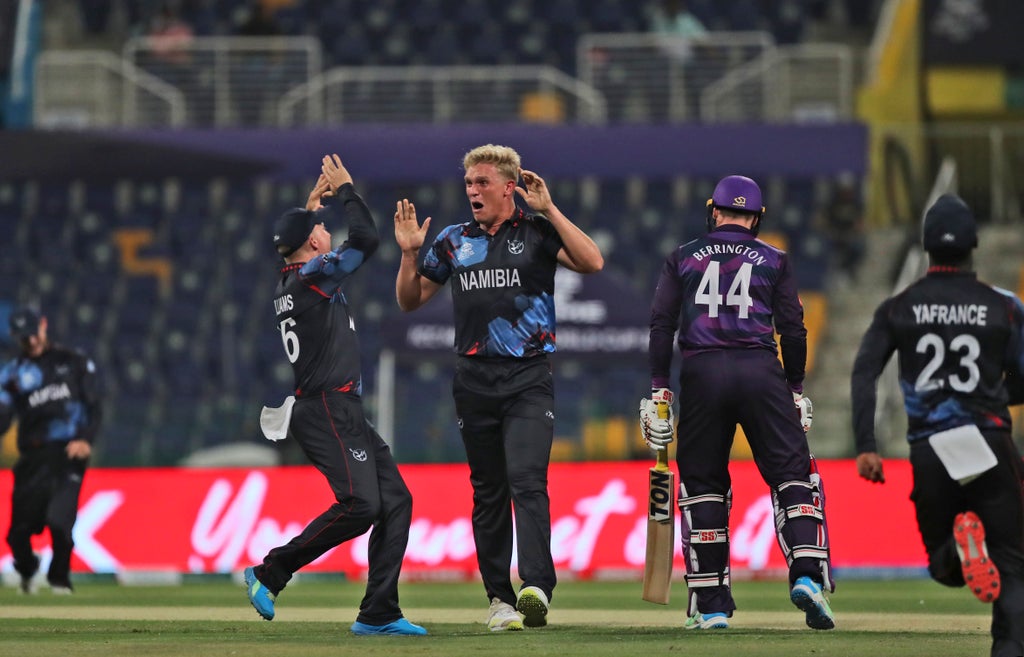 Stand-in Scotland captain Richie Berrington insisted his side must continue to enjoy the experience of the T20 World Cup despite a second successive defeat.

Berrington, taking the reins from the injured Kyle Coetzer, was the third of three wickets to fall in the opening over to Namibia left-armer Ruben Trumpelmann before Scotland recovered to post 109 for eight in Abu Dhabi.

Michael Leask followed up his 44 from 27 balls by taking two for 12 with his off-breaks but Namibia got over the line with four wickets to spare when JJ Smit cleared the point boundary from the first ball of the final over.

While Namibia were left celebrating a famous win, Scotland have now lost both Super 12 stage matches, having been thrashed by Afghanistan on Monday, but Berrington is adamant his side will not be feeling sorry for themselves.

They reached this stage by winning all three of their preliminary fixtures, which included giving Bangladesh a bloody nose, and they can now regroup for contests next week against New Zealand India and Pakistan.

“It’s not every day you get to be at a World Cup, so we have to keep enjoying it,” Berrington said. “We’ve got some exciting fixtures coming up, and we just need to keep believing and keep looking to improve. You just never know.

“I wouldn’t say we have any regrets. Obviously we’re disappointed with the last two games. We haven’t played as well as we know we can. But for us, look, we just have to look to regroup and just look to come back stronger.

“I think the thing about this team is we’re always looking to improve, and we’ll certainly keep doing that.”

This was the second time in two games Scotland lost their first three wickets in an over and while they were able to creep past three figures, Smit’s 32 not out from 23 balls got Namibia home.

“Obviously to have a first over like that makes it pretty hard to recover,” Berrington added. “Unfortunately we couldn’t get enough runs on the board to give us a chance in the second innings.

“I don’t think we have to go searching too much. We just have to sort of keep backing our skills and keep being clear with our game plans.

“I think we’ll probably take a couple of days maybe just to get away from it and just reflect a little bit on that performance.

“We’ve got a little bit of time now before we play our next game, so it will be nice just to have a couple of days together and just reflect and try and move forward.”

These two teams are the only non-Test playing nations remaining in the tournament and while Scotland’s hopes of reaching the semi-finals are a distant prospect, Namibia have made inroads towards reaching the knockout stages.

Doing so would be a seismic shock in the game for a country that had never before won a World Cup game in their history, but having seen off Ireland and Holland to reach this stage, Smit says confidence is sky high.

“If we qualify for the semi-finals of the World Cup, there’s going to be a massive uproar in the cricket world,” he said. “But we know we can. It’s possible. We’re here. We’re in the Super 12s. We’re enjoying it.”