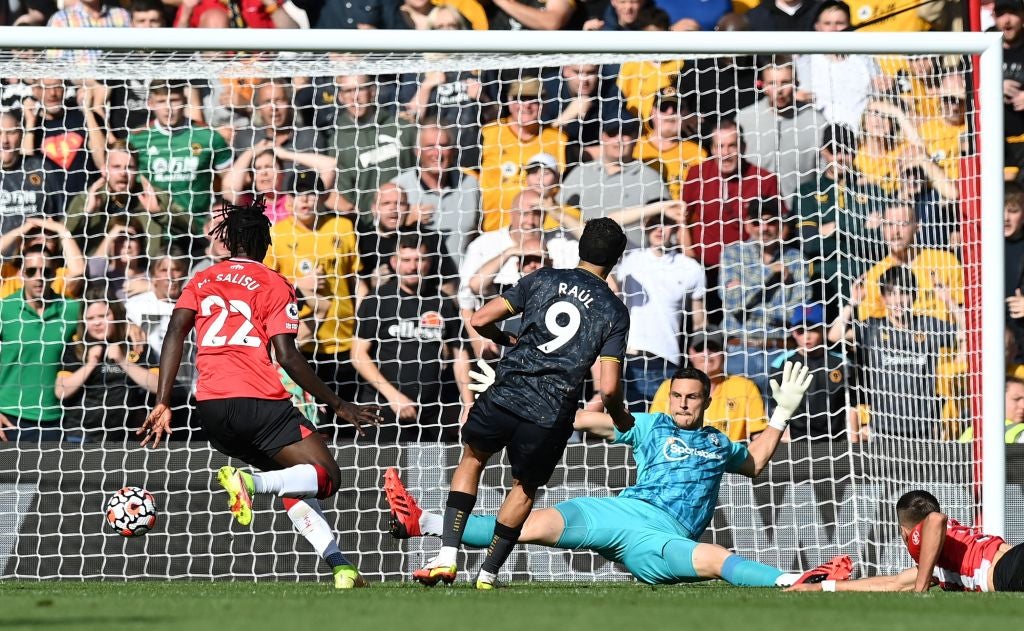 He twice beat Southampton defender Jan Bednarek, as well as leaving Mohammed Salisu on his backside, en route to calmly slotting beyond home goalkeeper Alex McCarthy in front of a packed away end.

Jimenez feared he would never play again in the aftermath of his horrific head injury at the Emirates Stadium almost 10 months ago and only returned to the field at the start of this campaign.

His milestone strike was a rare piece of quality during a largely forgettable affair – the 250th top-flight fixture staged at St Mary’s – and secured Wolves only a second success of the campaign under new boss Bruno Lage.

Defeat for Southampton leaves them eight games without a win dating back to last season and three successive outings without finding the net.

Following a tricky run of fixtures, the hosts came into the contest on the back of four consecutive draws, including last weekend’s creditable point at champions Manchester City.

Saints manager Ralph Hasenhuttl made one enforced change as Salisu replaced the injured Jack Stephens, while Hwang Hee-chan – the only Wolves player to have registered a top-flight goal this term ahead of kick-off – was among three players recalled by the away side.

Despite their struggles in front of goal, Wolves could have been ahead after just 47 seconds.

Rampaging wing-back Nelson Semedo was given a clear sight of goal after being slipped in by Jimenez on the right but his stinging drive was pushed away by McCarthy.

The lively start swiftly fizzled out, with both sides sloppily exchanging possession and struggling to create during a dismal first 45 minutes.

Nathan Redmond thought he had opened the scoring five minutes before the break but his neat turn and finish via the underside of the crossbar was swiftly ruled out, moments before Wolves keeper Jose Sa atoned for a poor clearance by comfortably denying Adam Armstrong.

Portuguese stopper Sa was forced into more serious action early in the second period as Southampton stepped up a gear.

The summer signing from Greek club Olympiacos used his legs to repel a low effort from Valentino Livramento following good work from Armstrong before pushing away a Mohamed Elyounoussi effort.

The former Benfica forward rolled back the clock by brushing off Bednarek wide on the left before charging towards the box, bamboozling both of Southampton’s centre-backs and coolly side-footing home.

With the home crowd growing restless, Saints poured bodies forward in the closing stages and were given six minutes of added time to chase a leveller.

But the afternoon belonged to Jimenez, who was denied a second by McCarthy deep into the additional period before soaking up the acclaim from his club’s jubilant fans.