It is 50 years since Rangers last won a European trophy. And who knows how long they will have to wait to get this close to another.

Eintracht Frankfurt were the winners after a penalty shootout in which Aaron Ramsay – brought to Ibrox for big moments such as this – was the villain, missing their fourth spot-kick to give the Germans the advantage.

The chance to be a hero fell to Rafael Borre and the Colombian lashed into the top corner. Nerves? No way. 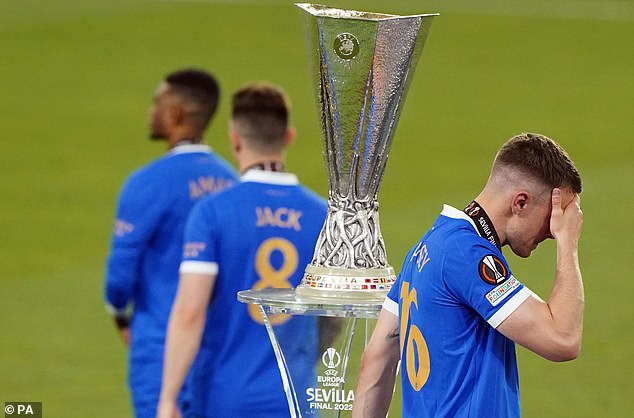 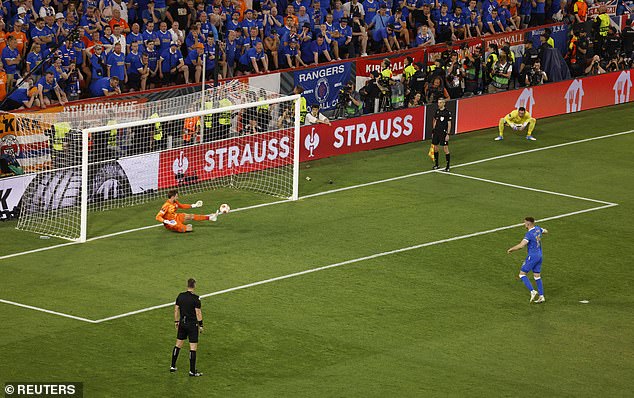 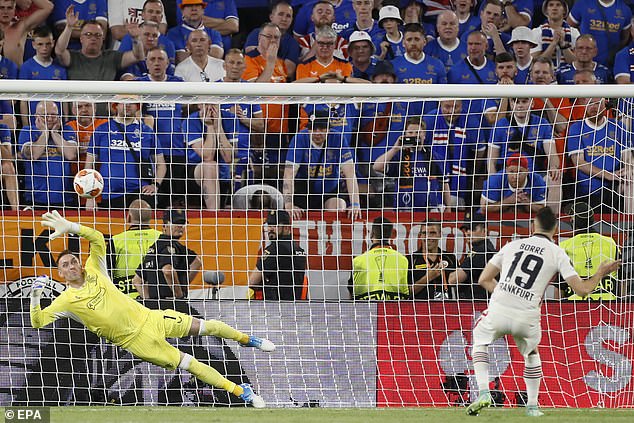 Rangers thought they had won it with one minute of extra-time to play when Ryan Kent strode onto Kemar Roofe’s cross. Somehow, though, goalkeeper Kevin Trapp found a leg to block the close-range blast. He was soon doing the same to deny Ramsay.

The Gers had taken the lead through Joe Aribo and, for a brief period, they dared to dream of lifting the trophy, and with it qualification for the Champions League. Not that next season was on the minds of the 11 on the pitch or their 100,000 supporters in Seville.

This was all about the glory of the night, and the chance to make history half a decade on from their Cup Winners’ Cup triumph 500 miles north in Barcelona. 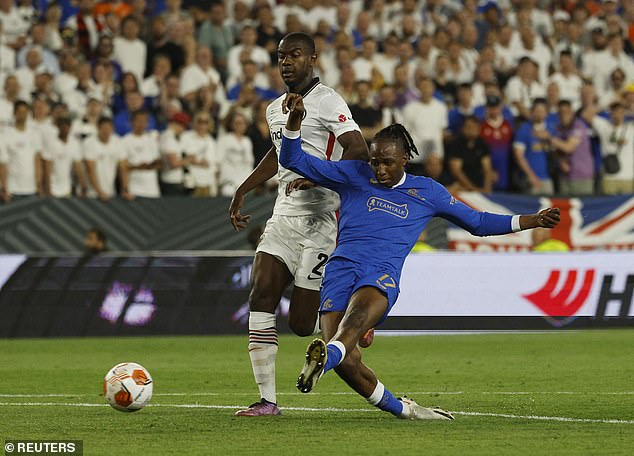 Rangers should not have been here, really. Not if club revenue is taken as yardstick by which to measure expected progress. Regardless of the outcome, this was already an historic achievement for Giovanni van Bronckhorst and his side.

And, in the 57th minute, they planted one sweaty palm on the prize. Amid the heat and humidity, Aribo was the coolest man inside the Ramon Sanchez-Pizjuan Stadium when seizing on a slip by defender Tuta and skipping clear on goal.

Given the 25-year-old spent the early part of his career as a League One midfielder, and to find himself in this position as a makeshift striker in a major European final, it would have been understandable had he fluffed his lines on such a grand stage. No chance.

Aribo took one look at the target and did not complicate matters, rolling low beyond Kevin Trapp to give Rangers a lead they had barely deserved. 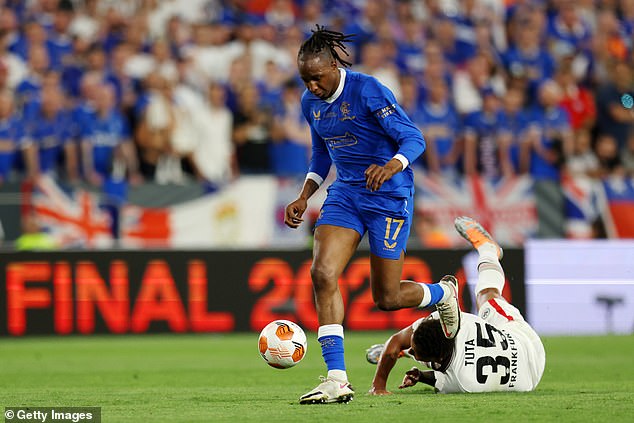 As if irked by the seeming injustice, Frankfurt wasted little time in setting after an equaliser. The only surprise was that it took another 12 minutes to arrive.

Filip Kostic had been a threat all evening and he was afforded too much space to size a cross to the near post from the left. It was begging to be converted from the moment it left the Serbian’s boot and those prayers were answered when Borre stole between two blue jerseys to toe home. And so to extra-time, where tired bodies always seemed destined for penalties.

Rangers had emerged a couple of hours before kick-off dressed in tracksuits and minus a customary cup-final suit – they were too smart for that given temperatures approaching 40C. A group stroll earlier in the day did not get much beyond crawling pace, either. 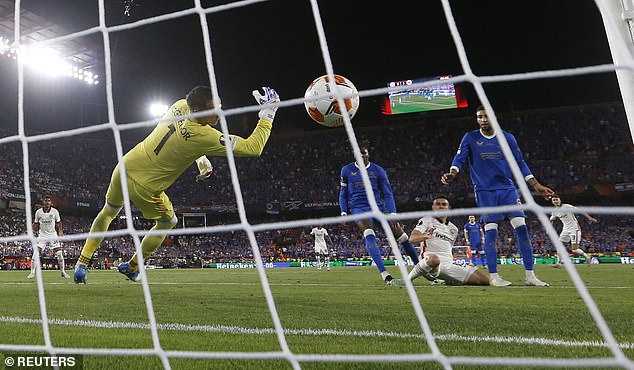 But it did not take long for things to boil over on the pitch. There was a touch of the over-hyped Paul Gascoigne in the 1991 FA Cup Final about John Lundstram when, after just five minutes, he went studs-up into a head-high challenge.

Ex-Rangers star Gascoigne, then of Spurs, landed his boot in the chest of Nottingham Forest’s Garry Parker and, remarkably, avoided punishment. Surely, 21 years on, Lundstram was in danger of dismissal, especially considering the bloodied mess in which he left Frankfurt midfielder Sebastian Rode?

Not so. Not even a booking, in fact, despite the presence of VAR. Had that been the Premier League, you suspect the former Sheffield United midfielder would have been in serious trouble.

Even though Lundstram remained, the opening exchanges still held the suspicion of Frankfurt having an extra man. 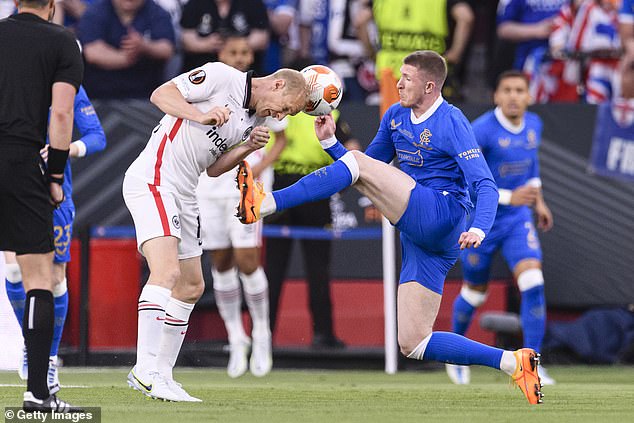 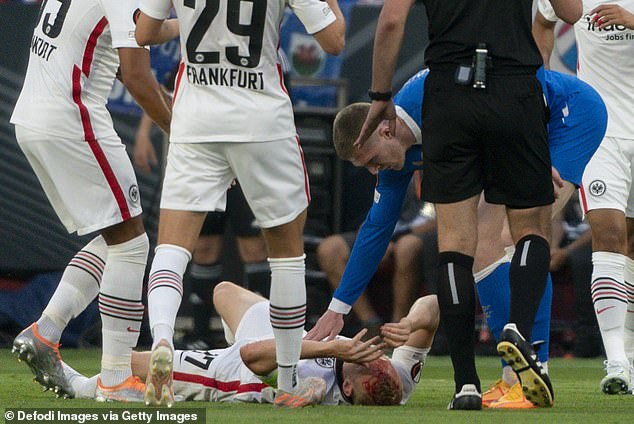 It is with good reason that they have arrived here unbeaten in the competition. They are no mugs, so goes the compliment. But muggers they are, sitting deep and picking pockets of opponents before springing cunning counters.

Ryan Kent fell victim to a robbery on 12 minutes and was fortunate when Djibril Sow’s shot was snaffled by Allan McGregor. The goalkeeper was soon flipping an Ansgar Knauff steer around the post.

Rangers were in a muddle and, for once, the heat proved to be friend not foe, the pre-arranged ‘cooling break’ just before the half hour allowing Van Bronckhorst a window to regroup. Boy, they needed it.

When play restarted, Frankfurt’s Jesper Lindstrom was only denied a goal when his half-volley bounced up into team-mate Daichi Kamada inside the six-yard area and Kostic skidded a drive inches wide. Rangers, you felt, were already looking forward to the next break – getting to half-time all square would be a small victory. 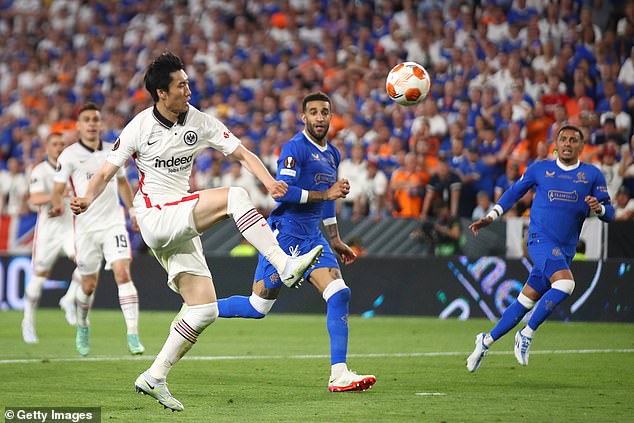 Their set-pieces and deliveries from open play were invariably high, and not very handsome. Their best connection of the evening had been Lundstram’s studs on the brow of Rode.

Belatedly, Lundstram drew a save from Trapp when his header was tipped over the crossbar. It coincided with a much-improved spell before half-time.

The second half started beneath a cloud of smoke with flares dispatched from the stands. Given the absence of real quality in the game, it did not feel as if you were missing much.

But with the red and blue fumes came an injection of colour into the contest. Finally, a battle befitting a final.