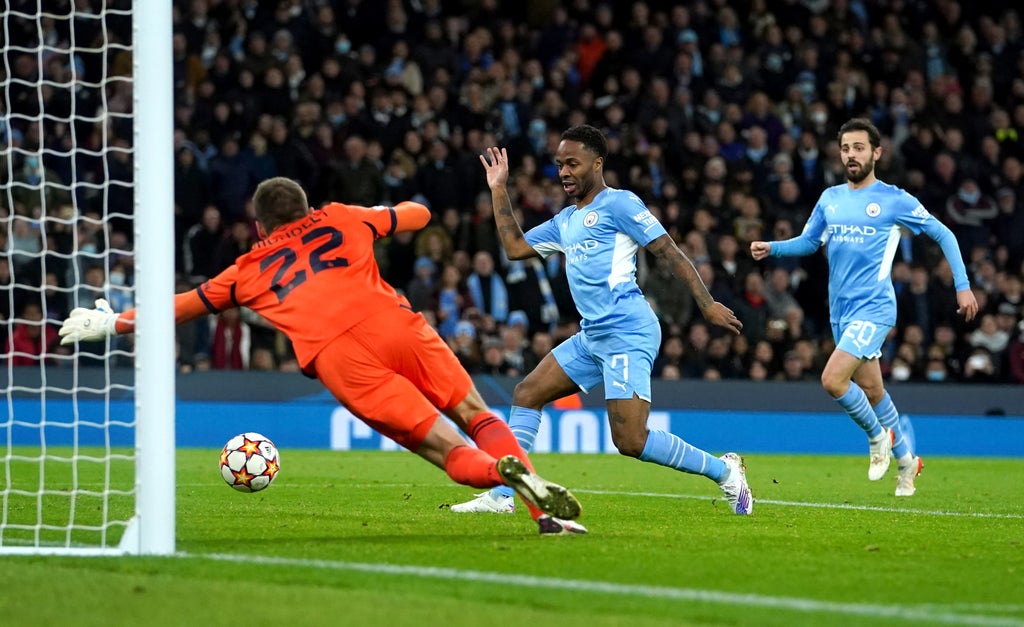 Pep Guardiola was in a funny mood after Manchester City’s win over Club Brugge. That’s funny as in strange rather than funny “haha”, though sometimes all you can do is laugh when a manager watches his players gradually hit their stride in an ultimately comfortable 4-1 win in the Champions League and yet seems to want to go to war with the world.

Exactly what Guardiola was agitated about is unclear, despite the ill-fated efforts of journalists present to find out. The first clue came when he spent a short time on the phone after the final whistle, pacing around the Etihad pitch looking quite animated, before eventually completing a round of television flash interviews.

In one of those interviews, to BT Sport, Guardiola bristled a little at the innocent suggestion that RB Leipzig had “helped” his side out by scoring a late goal in their 2-2 draw against Paris Saint-Germain, which means City now top Group A and have all but qualified for the knock-out stages.

“We help each other,” he hit back. “What we have done these years, I promise you, when you are at Manchester City you realise nobody helps you. What we have done, we do it. I’m so satisfied. When you are in high clubs I understand. Here, no.

“What we win we know it, that’s why all the titles I won before was because I was with the big clubs. Absolutely, the pleasure [of winning things at City] is higher.”

His point, essentially, was City’s success is a product of their own hard work rather than handouts, but there were hints at a few old hang-ups there, too – the idea of City being outside of and treated differently to European football’s old elite, the perception he has only been successful because he has managed big clubs. The significance of bringing them up now was unclear.

“Listen don’t misunderstand me, what I’m saying is what we’ve done we’ve deserved it, we’ve done it for ourselves,” he attempted to clarify. “And I’m very pleased. We don’t have to be helped. Absolutely not.”

“I’m more than pleased with what we’ve done as we were there all the time. All the credit we’ve done is for ourselves and I know what we are talking about.” That’s that cleared up, then.

Guardiola then had a little dig at those who “took the piss” out of him for suggesting that this meeting with Brugge was more important than Saturday’s Manchester derby.

His reasoning, as explained in the pre-match press conference, was that there are fewer games in the Champions League group stages and therefore less margin for error. “Everyone saying Pep is talking bullshit, I wasn’t. This was so important. Hopefully in the last 16, with the best teams in Europe.”

The most interesting set of answers were saved for the subject of Raheem Sterling, though, who came off the substitutes bench to score his first goal in a City shirt for two and a half months.

“I’m so happy for him,” his manager said. Anyone who has followed Guardiola enough over his past six years in Manchester knows he uses words to that effect a lot, and they can look very different coming out of his mouth when compared to how they appear down in black and white.

Was this an improvement on his recent displays? “I know Raheem Sterling. I’m so happy for him, for his goal and for his performance,” he repeated. Could it be the confidence boost he requires? “You’ll have to ask him.”

Guardiola was a little more expansive on whether this could be the start of a return to form, at least. “I expect the best from my players, we play for our people, I expect the best, I want more from all of them. From staff to backroom staff, I want the best. If it doesn’t go well we have a problem.”

You wouldn’t want to bet on Sterling making a return to the starting line-up at Old Trafford, in that case, but his cameo against Brugge felt like it could be the most significant consequence of Wednesday night’s win moving forward.

Sterling’s difficulties at City since the back end of last season have been well-documented. A chat with Guardiola before the start of the season helped to clear the air somewhat over him losing his starting status, though clearly, he wants to play and start more regularly.

His first goal since August’s 5-0 win over Norwich was the type that City had threatened to score all evening, though the typically Guardiola-style low crosses to the far post had often gone by without anyone there to apply the finish.

Sterling, however, was on hand for a simple tap-in after Phil Foden’s fabulous through ball set Ilkay Gundogan on one of City’s favourite routes to goal. It did not go unnoticed that Sterling was on his natural right-hand side too, something rarely seen since the second title-winning season.

It was just one goal, a simple finish at that, but it could represent a fresh start for Sterling at a time when City’s attack – boom one week, bust the next – is arguably in need of one too. And whatever else is eating his manager, that should be reason enough to raise a smile. Cheer up Pep, it’s not all bad.