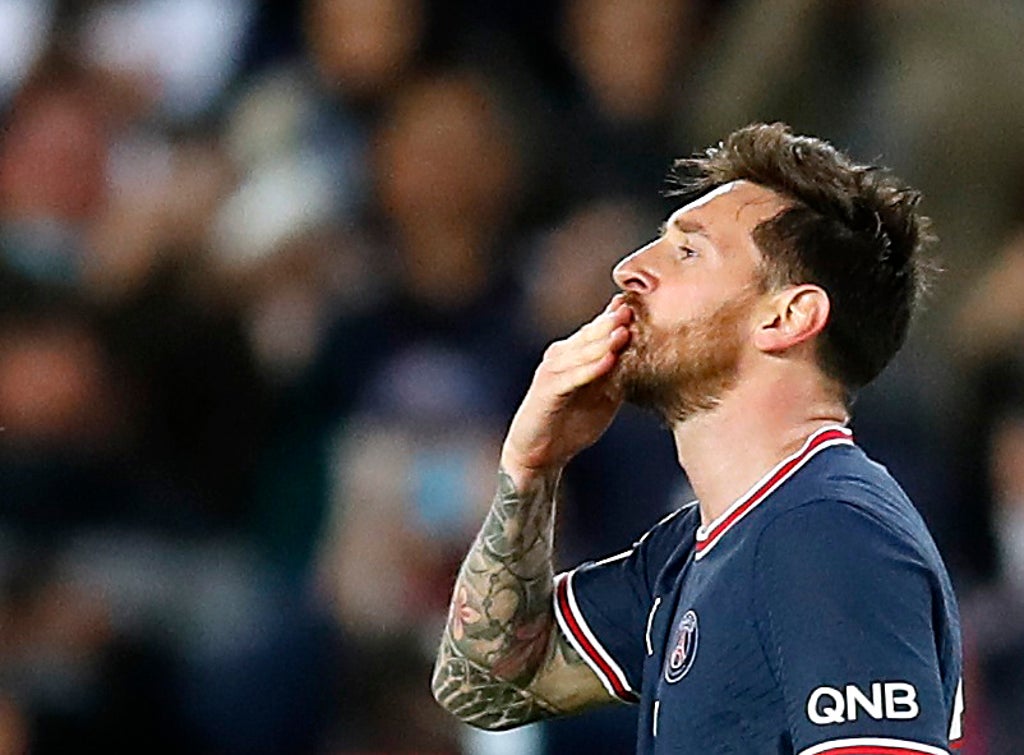 As if there was any doubt. Lionel Messi may have taken his time finding his feet at PSG but they dazzled here with a stunning first goal for the club. In truth he had been a peripheral figure for much of the game, with occasional glimpses of guile when picking the ball up in midfield but offering little goal threat and even less defensive cover for his right-back, Achraf Hakimi.

But all of that was forgotten in a blur of movement as he dribbled in from the left and played a quick one-two with Kylian Mbappe before curling a gorgeous finish into the top corner of Ederson’s goal. It was quintessential Messi – the dribble, the bounce off a teammate, the precise shot, and the sight of the net bulging. The Parc des Princes erupted. This is what Paris came to see, and the lingering sense at the end of a spellbinding night of Champions League football was that there is much more to come from the No30 in blue.

There were two changes for City from the side which beat Chelsea so impressively on the weekend. Phil Foden was replaced by Raheem Sterling in that false nine role and Riyad Mahrez came in from the cold to take Gabriel Jesus’s spot on the right wing.

City missed Jesus here, though. He has proved adept so far this season at causing havoc on that side, playing something of a hybrid between striker and wide player, and his goal against Chelsea was a perfect example of his natural attacking instincts, spinning under pressure with his back to goal before firing home.

Mahrez and Sterling flitted in and out of the game, but neither could be expected to offer the kind of physical and instinctive proposition in the box which Jesus provides. When Foden came on he immediately brought City to life and the irony was that his spark only served to underline the lack of presence in the box to finish his crosses. Jesus did eventually take the field, but by then the damage was done.

It may have been Idrissa Gueye on the scoresheet, after smashing home from eight yards, but all three of PSG’s luxury front line played their part in their opener. First Mbappe wriggled free on the right side of the box before drilling a low cut-back across goal. Messi arrived on to the scene from deep as Neymar nipped in from the back post, both a fraction too early, but it was their presence which sent the City defence haywire chasing shadows. That allowed Gueye the time and space to touch and finish, and it showed the value of world-class talent in the box.

Kevin De Bruyne played his first 90 minutes of the season after making a slow and steady return from injury, and for the first time he looked close to his innovative best. His first-half flick with the outside of his right boot was a piece of genius, and should have led to an equaliser only for Sterling and more miraculously Bernardo Silva to hit the bar. The only sign of sluggishness his high tackle on Gueye could and perhaps should have brought a red card after a rare sloppy touch. De Bruyne avoided further punishment, and Pep Guardiola would have breathed a sigh of relief now City have got their main man back.

All to play for in Group A

City and PSG normally make light work of the Champions League group stage but this is a hugely competitive line-up. Club Bruges’ win over RB Leipzig means PSG and Bruges share top spot on four points, while City sit third with three. Leipzig have nothing to show from their first two games but there is no doubt they will play their part in the outcome of this group of death.