If you want to know why referee Paul Tierney sent off Rob Holding in last week’s north London derby then head out into your garden and run headlong into the bird table.

That is precisely what it must have felt like for Tottenham’s Son Heung-min.

Running on to a through pass from deep, Son was felled when Holding slowed his run, half-turned and held his forearm out at head height. It was a pre-meditated, deliberate act and could easily have been punished by a straight red card. Instead, Tierney presented a second yellow and Holding walked. 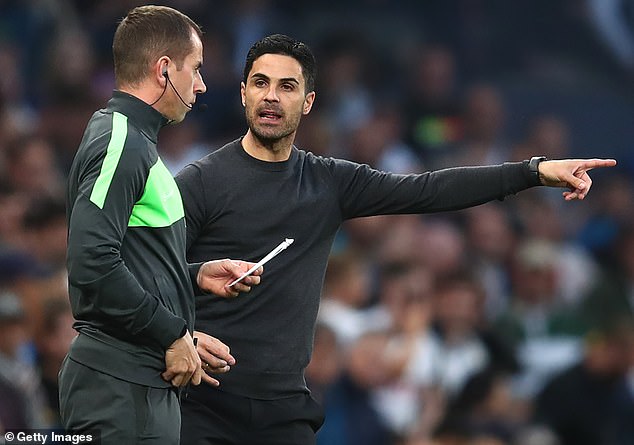 A replay would have been available to Mikel Arteta, the Arsenal manager, immediately. He could also have seen it at half-time and full time.

He could also have taken a look at the early penalty that was awarded for a clear shove on Son by Arsenal full back Cedric Soares. He could have seen pretty quickly that the key decisions of the game were the right ones.

However, Arteta did not appear to want perspective and balance. Instead, he wanted a villain. His team had flunked the biggest game of the season and he wanted someone to blame. In his mind, that person was the referee. 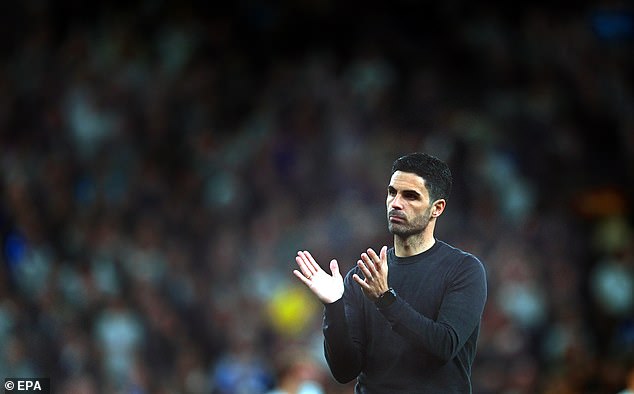 His post-match comments were embarrassing. ‘A beautiful game has been destroyed,’ he said. ‘But if I speak about it, I will be suspended.’

Arteta will doubtless have forgotten about it all by now. His team play another big game at Newcastle on Monday night. But things like this matter because they add to the difficulty and complexity of the environment in which our referees have to work.

It is an environment already made hazardous by the fact players cheat constantly and by the way modern television coverage exposes every single mistake they make. VAR has helped them in some ways, but not in others. 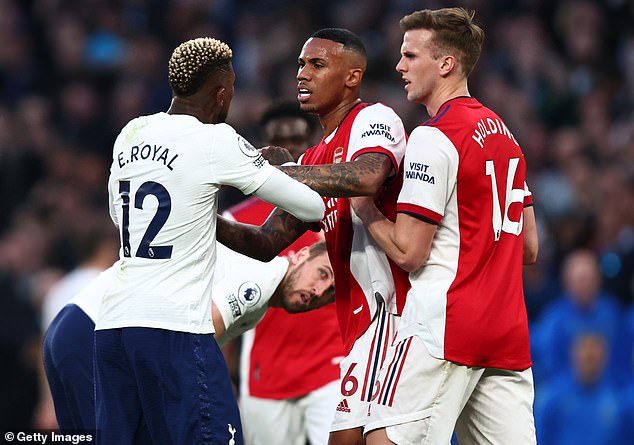 A day earlier at Leeds, referee Anthony Taylor spent the whole evening being harangued and harassed by home supporters. His crime? Spotting a clear red-card tackle by Leeds winger Dan James. On the touchline, Leeds manager Jesse Marsch did his best impression of a man who had been deeply wronged. And he had — but by his own player, not the referee. At least Marsch had the integrity after the game to admit that.

Managers and players say that they want our match officials to be better, to be more consistent and to be approachable but their own behaviour does nothing to encourage that.

How can a referee expect to have dialogue with players who persistently scream in their face and managers who are desperate to blame them for every mistake real or imagined? 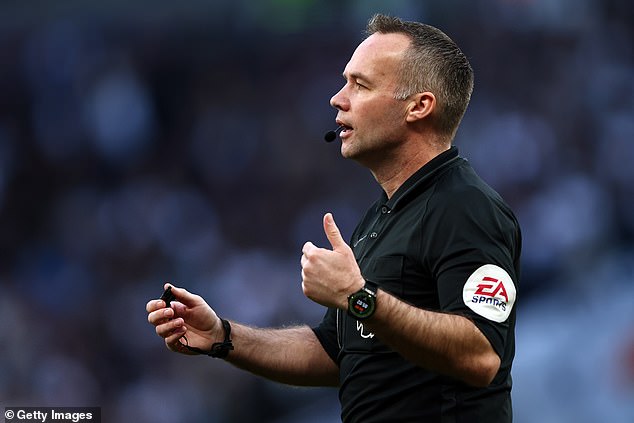 Paul Tierney (pictured) got all of the major decisions in the game spot on, including the penalty

Having travelled widely across Europe and to major tournaments, my personal view is that our referees are better than most. You only need to attend one World Cup to realise this.

They are not perfect, but how can they be? The modern game is played at a frenetic pace and honesty levels of the average Premier League player have been travelling south for years.

Not that any of this will particularly worry Arteta and others like him. Premier League managers are happy to stand in front of cameras, demolish a man’s reputation and move on until the next time.

By now, Arteta will hopefully have realised the reason his team lost at Tottenham. He will know it had nothing to do with Tierney and everything to do with his own players.

But next time he will still expect it to be better and that is not logical.

Our Premier League managers are human. The pressures they work under are immense. But so are those faced by our match officials and the plain fact is that Arteta and many others like him are making it worse.

Philippe Coutinho has not turned out to be the transformational signing Aston Villa were hoping for.

The club were 14th in the Premier League when they signed the Brazilian and are 13th now.

However, in taking Coutinho on a permanent deal from Barcelona, Villa have negotiated a potential £33m buyout down to almost half of that and have also persuaded the 29-year-old to take a mammoth cut in his wages.

Coutinho at £33m always felt top-heavy. At £17m, it starts to look like a very good piece of business indeed for a player who still has something to offer. 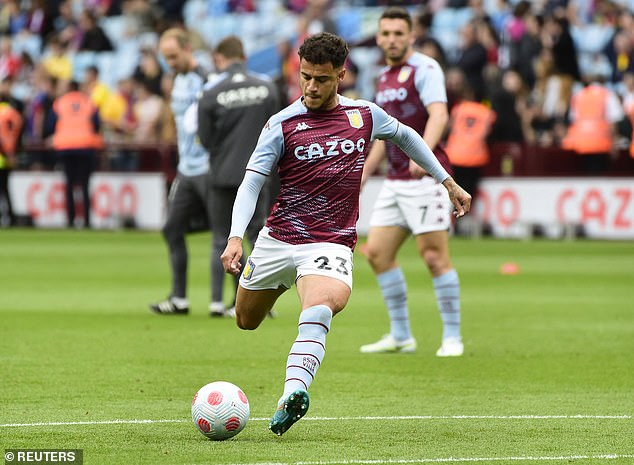 Philippe Coutinho is a snip for Aston Villa at that price, they have done well to get him on board

Why was the final at United?

There were more than 60,000 supporters inside Old Trafford for the FA Youth Cup final which was fabulous for everyone apart from the beaten team — Nottingham Forest.

Forest had done wonderfully to reach the final, defeating teams including nine-time winners Chelsea along the way.

They were the first team from a non-Premier League club to reach the final for more than a decade. 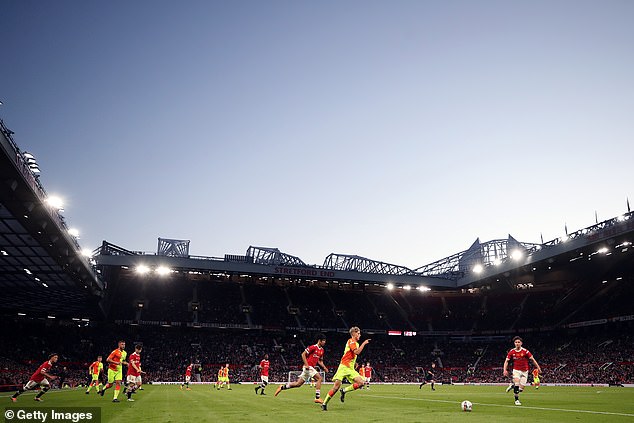 The Youth Cup final is a final, not a party, and should be at a neutral venue rather than at the home of one of the two teams

So to be asked to play against Manchester United on their home ground seemed odd.

Apparently, the venue was decided on the toss of a coin so the game could just as easily have been at the City Ground.

But that would also not have been right. Why not a neutral venue? It’s a final, not a party.

Thomas Tuchel is as gracious a football manager as you could hope to meet and it’s just as well.

To ask Tuchel and his players to hang around for 25 minutes after the FA Cup final while Liverpool cavorted on the pitch and did TV interviews was ridiculous.

The game ended the moment the final penalty kick was scored by Kostas Tsimikas. 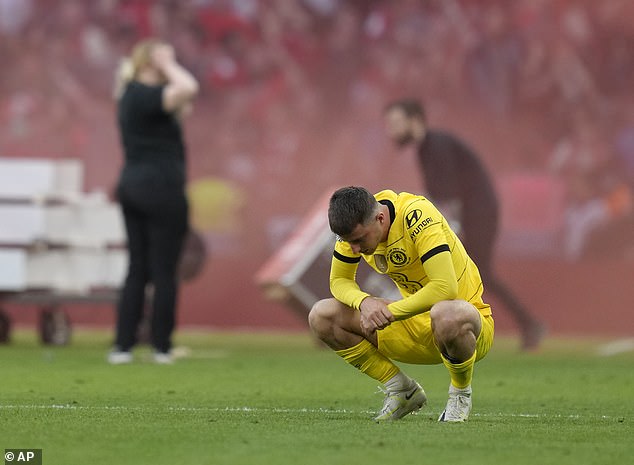