Former Socceroos coach Ange Postecoglou says his phone has been blowing up with messages from superstar Celtic fans after the Aussie manager led the club to the 2022 Scottish Premiership.

The 56-year-old says since securing the title in a 1-1 all draw against Dundee United on May 12, famous supporters from around the world have reached out to congratulate him on the side’s triumph. 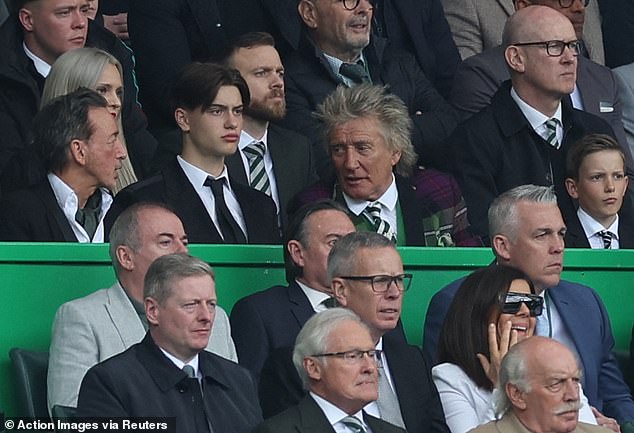 ‘I’ve had all sorts. You find that so many people support this football club,’ Postecoglou told The Daily Telegraph.

‘[W]hether it’s someone like Rod Stewart, [singer] Lewis Capaldi, [comedian] Kevin Bridges. I had a great clip from one of the guys from Peaky Blinders.

‘Pretty significant people across the board. Eddie McGuire’s a massive Celtic fan because of his dad. I’m pretty close to Luke Beveridge, Craig Bellamy, Brian Goorjian, Neil Craig, Eddie Jones and many others.’

The Scottish club has amassed a following of nine million fans and over 200 supporter groups across the globe, with 60,000 diehards cramming into Celtic Park to watch their side play.

Postecoglou’s turnaround from unknown Aussie to Scottish hero in the space of 12 months even caught the eye of rapper Snoop Dogg, who promised to fly to Glasgow and celebrate with Celtic if they were crowned champions.

‘My Bhoys are not there yet but after their win against Rangers, they are getting close to winning the championship,’ Snoop Dogg said back in April.

‘[The] passport is out of the safe … as soon as they are champions, you better believe I am on that flight to Glasgow.’

Stewart even paid Postecoglou a visit at his home earlier this year, and Celtic fans also incorporated his name into the Wham! song ‘Last Christmas’ in a chant that’s since gone viral.

‘I was horrified to hear my kids singing it at Christmas time,’ Postecoglou said.

‘It’s all a bit surreal. But I think before one of the recent games I had a knock at my door and Rod Stewart came in and gave me a hug. And that shows you things change!’ 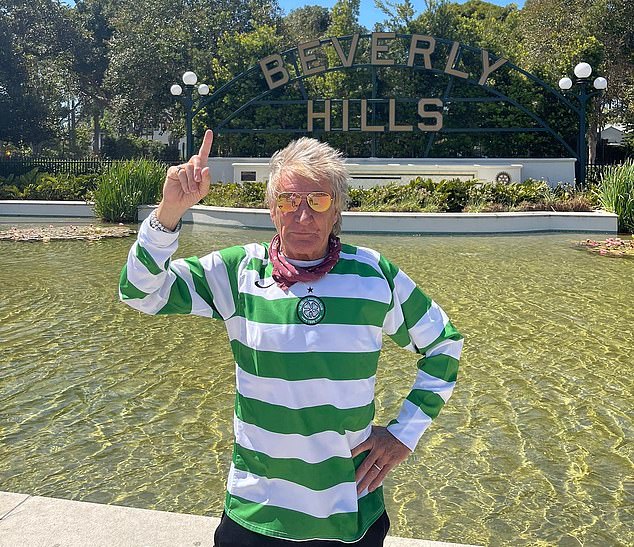 Rod Stewart poses on Instagram, pictured in the Celtic green and white strip – celebrating their Scottish title from Los Angeles

On May 13, Stewart posted a picture of himself in Celtic colours while away in Beverly Hills, with the caption: ‘Celts are Champions again! @celticfc’.

Celtic host Motherwell on May 14, hoping for a strong win to kick-off a major title celebration.