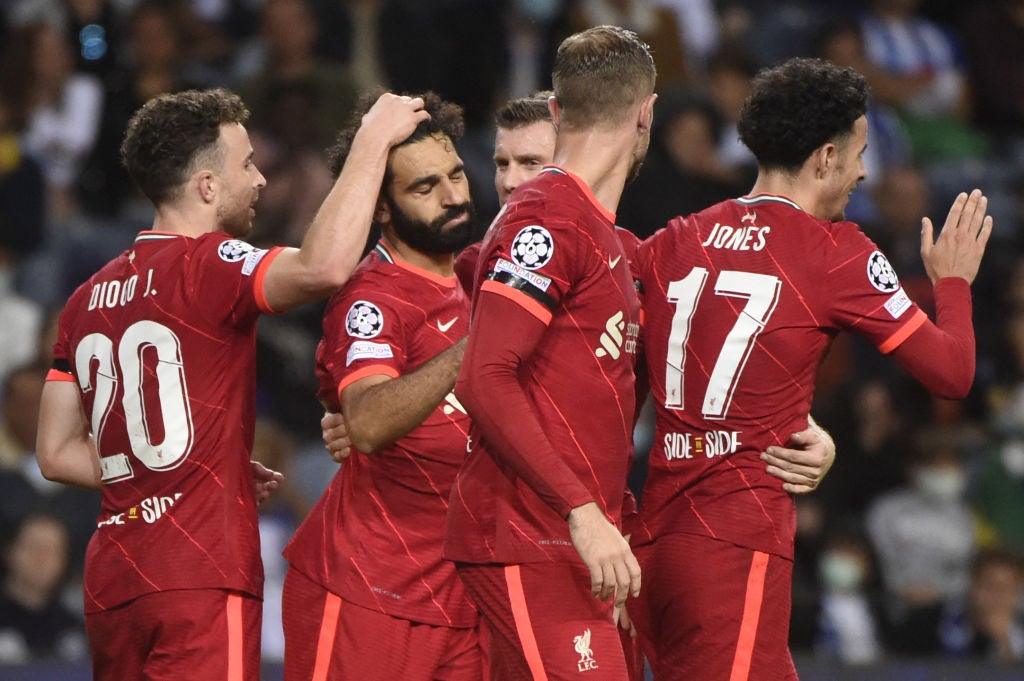 Jurgen Klopp’s insistence that Liverpool would not dine out on their previous two swashbuckling victories at Porto materialised with his side serving up another carving of the hosts at Estadio do Dragao.

Sergio Conceicao could be forgiven for waving the white flag at the second this fixture is announced in future, having overseen a sequence of three defeats since 2018 in which 14 goals have been conceded and just two netted.

Mohamed Salah, Sadio Mane and Roberto Firmino were the familiar scorers on Tuesday night, although Diogo Costa didn’t show much resistance. He turned in an awfully poor impersonation of a goalkeeper, and the slight on Liverpool’s performance is they did not ruthlessly force the result to tell the full story of their dominance.

That can be the only criticism of an accomplished 5-1 win, registered with surety and without sweat, that perhaps was an act of kindness to Porto.

Champions League games shouldn’t be this easy, but the Merseysiders somehow always manage to muddle a usually resilient, steely team into a total mess.

There was no one eye on Sunday’s showdown with Manchester City as Klopp selected his strongest possible starting XI here.

There was, unfortunately for Liverpool, no Trent Alexander-Arnold who sustained a groin injury that could keep him sidelined for the weekend’s mega match. The break James Milner glass was activated at right-back and the emergency stand-in was once again sublime.

Porto fielded a defensive blow of their own as Pepe, who had been a major doubt, was named as a starter but limped off during the warm-up. Fabio Cardoso replaced the veteran, before Otavio also succumbed to an early niggle with Fabio Vieira – scouted by Liverpool – stepping into midfield for him.

The bad news kept coming for them. Porto were totally overrun in the centre of the park, where young Curtis Jones pulled the strings and pulled them apart alongside Fabinho and Jordan Henderson.

Conceicao’s men were getting smothered, smacked and ultimately shellacked. The conversion of their suffering on the scoreboard began on 19 minutes when Salah profited from a combination of Jones brilliance and Costa’s barely there goalkeeping.

Liverpool’s 20-year-old midfielder cut in from the left and fired in a low drive that Porto’s stopper meekly parried onto Zaidu Sanusi. The ball broke for Salah, who couldn’t believe his fortune from four yards out.

Jones was excellent in keeping the ball alive for the second, before Milner offered a nod to Alexander-Arnold with a stunning low cross from the right that Costa dithered over.

While the rest of the Porto defence morphed into statutes, Mane had no such indecision nor freeze and sotted in.

Another goal designed by Jones finished with an unmarked Salah passing the ball beyond Costa to make it 3-0.

There was fleeting relief for Porto when Mehdi Taremi got in front of Gomez to thunder in a near-post header.

The home side had tried to galvanise themselves and the crowd, but three minutes later, Costa produced another howler. The keeper was stranded after coming out for a long Jones ball he shouldn’t have been trying to claim and Firmino nonchalantly rolled home.

Costa sprinted back to avert his shambles but the ball trickled over the line before he could intervene. Tragic, comedic, strange, shocking.

The pain was not paused there. Jones shot from distance, with his effort was blocked but Firmino collected the loose ball and converted – a lengthy VAR check confirming he wasn’t offside.

Conceicao huddled his men in the centre circle after the final whistle to lift them up. He should really start shopping for that white flag now.