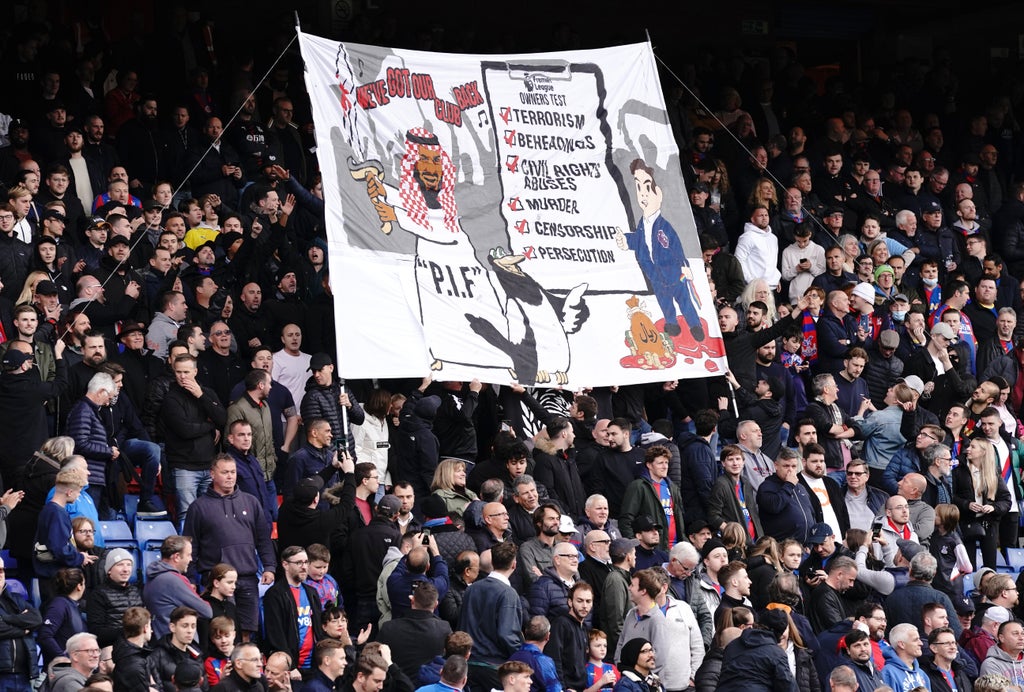 Croydon Metropolitan Police are carrying out enquiries into the banner unveiled by Crystal Palace fans ahead of Saturday’s 1-1 draw with Newcastle.

A graphic banner was held up by supporters in the Holmesdale End at Selhurst Park which appeared to question the Premier League Director’ and Owners’ Test and listed some of the human rights issues in Saudi Arabia.

It comes after the Premier League gave the go-ahead for a Saudi-backed consortium to take control of Newcastle earlier in the month despite Public Investment Fund which is the sovereign wealth fund of Saudi Arabia, being the majority financer of the takeover.

A post from the official Croydon MPS Twitter account read: “On Saturday 23 October police received a report of an offensive banner displayed by Crystal Palace fans.

“Officers are assessing the information and carrying out enquiries. Any allegations of racist abuse will be taken very seriously.”

Palace supporters group Holmesdale Fanatics released a statement not long after the banner had been unveiled before the match with Newcastle got under way.

“To give the thumbs up to this deal at a time when the Premier League is promoting the women’s game and inclusive initiatives such as rainbow armbands, shows the total hypocrisy at play and demonstrates the league’s soulless agenda where profits trump all.”

On the banner ‘terrorism, beheading, civil rights abuses, murder, censorship and persecution’ were listed on a clipboard under the headline Premier League Owners Test while there was also a person wearing Arab-style clothing and holding a sword with blood on it.

The Holmesdale Fanatics were not the only Palace fans group to protest against the recent Newcastle takeover on Saturday.

Proud and Palace, the club’s official lesbian, gay, bisexual and transgender supporters group, posted a video on their Twitter account which highlighted the imprisonment of Suhail al-Jameel in Saudi Arabia.

A spokeswoman for the group said: “We want to pick up the baton started by our counterparts at Spurs, LGBT group Proud Lilywhites by raising awareness of Suhail al-Jameel.

“Suhail is in prison in Saudi Arabia for three years for being gay. He is a 23-year-old man who has been subjected to 800 lashes as part of his punishment.

“We don’t believe these owners have a place in the Premier League and we want to keep raising awareness.”

The Premier League has been approached for a comment.