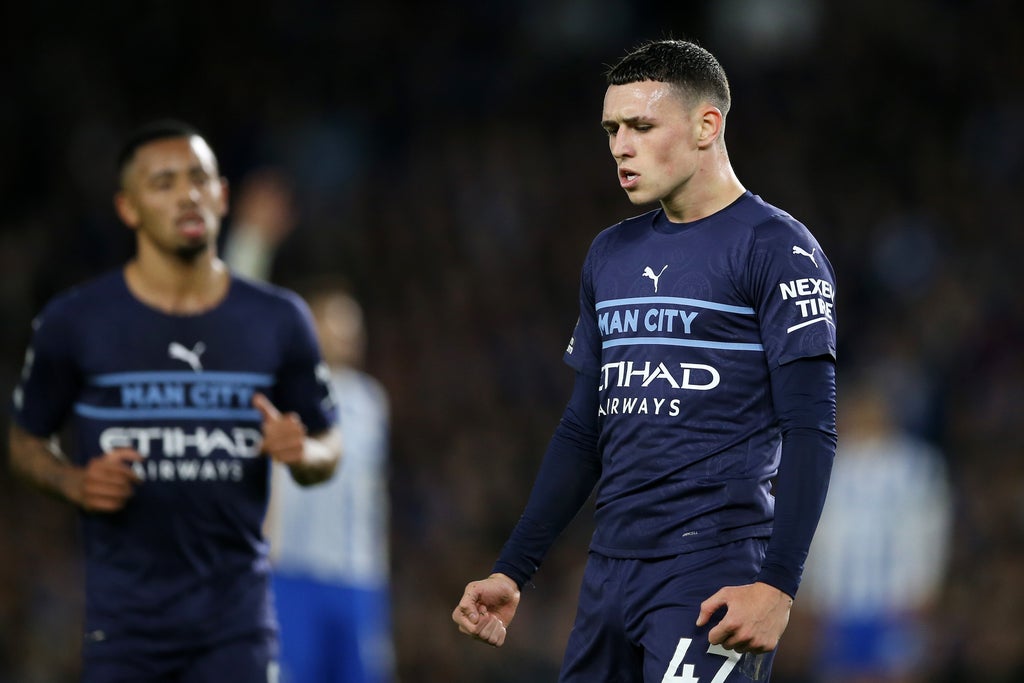 Phil Foden scored twice and excelled in his central attacking role for Manchester City as they comprehensively dispatched Brighton 4-1 to leapfrog Liverpool and go second in the Premier League table.

The 21-year-old England forward has been in excellent form since returning from an injury suffered at Euro 2020 and manager Pep Guardiola has favoured utilising him down the middle of the forward line in the absence of the departed Sergio Aguero. He scored twice, though both goals had an element of fortune to them, and assisted Riyad Mahrez’s late fourth on Saturday evening.

Former City defender Micah Richards was effusive in his praise of Foden on Sky Sports afterwards, saying: “It’s a fluid system. There’s been so much talk about whether Man City should play with a striker, but when they play like that today you see why they can compete without a striker. When you have players like Foden who wants to press and drop deeper, it works.”

Richards said one of the key reasons behind Foden’s success was the decision he and the club made to remain at the Etihad Stadium training under Guardiola’s tutelage earlier in his career, rather than playing lower-level football on loan elsewhere.

“People were asking if he was a flash in pan, but he’s getting goals assists, showing everyone what he can do,” the former Fiorentina man added. “He got lucky with second tonight but he’s a really special talent. He has a manager who believes in him. Some pundits even were saying he should go on loan but he’s persevered with [Guardiola].”

Jamie Redknapp lauded the Stockport-born forward’s adaptability and willingness to work hard, but believes a role deeper in the Manchester City midfield would benefit him further.

“He’s so versatile,” the former Liverpool midfielder said. “I think if you asked him where his favourite position is, my guess would be where Bernardo Silva plays, or Kevin de Bruyne, where he can be involved all the time. I saw him be Man of the Match at Anfield last season on the right-hand side, now he plays as a central striker at times. He’s getting goals and assists now. I think play him deeper and you’ll see even more from him because he can be more involved.”

The impact that elite foreign coaches are having on young English players is also something Redknapp highlighted as he said: “The experience of working with Guardiola and [other players with] coaches like [Thomas] Tuchel and [Jurgen] Klopp is vital. Learning new skills, new tactics and taking on information. That can only help English football kick on.”