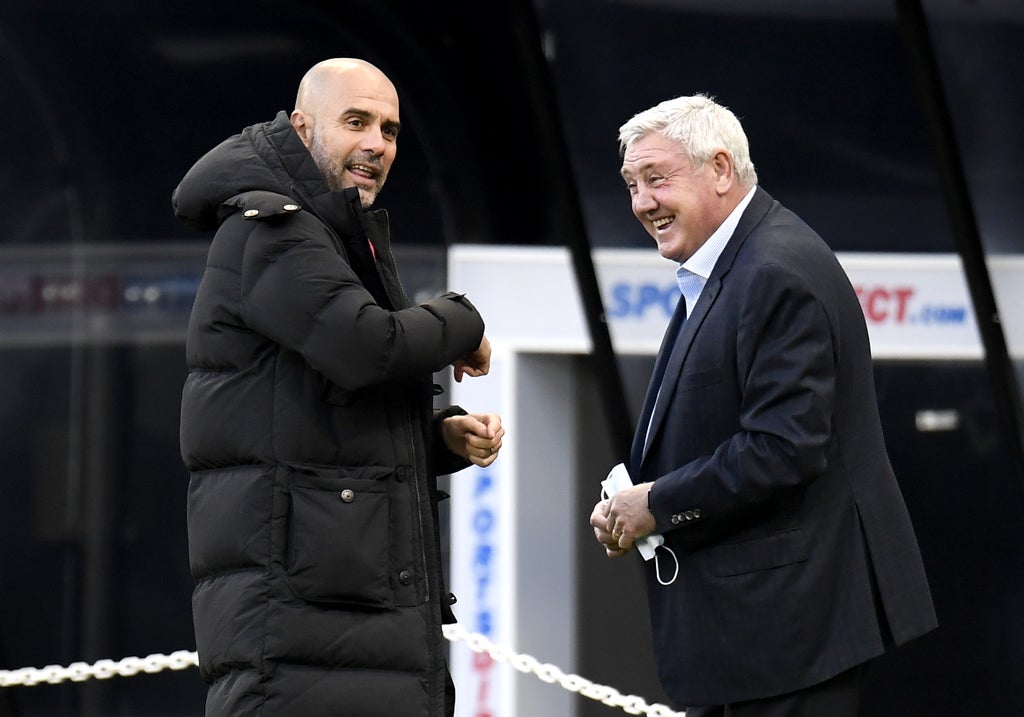 Pep Guardiola insists he still loves being a football manager but the Manchester City boss says he ignores social media.

Steve Bruce admitted he may walk away from the game after his sacking as Newcastle boss on Wednesday, such was the level of abuse directed at him and his family during his reign at St James’ Park.

Guardiola offered sympathy and praise for Bruce, but said the best way to survive in the game is to disregard what was being said online.

“We get praise when we win, and we are incredibly criticised, sometimes more than the worst in society, because we don’t win games,” Guardiola said. “I get treated good because we win sometimes, I’m treated bad because we lose.”

Asked if he enjoyed the job, he said: “I love it. To the comments online I pay no attention. I know as a manager the success is because we have done it, not I have done it.

“From our chief executive, our incredible workers, the players of course, that’s why we’re here, the staff and backroom staff, the success is because we have done it.”

Guardiola is in his sixth season with City, the longest stay anywhere in his managerial career.

The 50-year-old took a year’s sabbatical when he left Barcelona in 2012 before later joining Bayern Munich, and said he felt the scrutiny faced by coaches in Spain was even more intense than the Premier League.

“Here it is nicer,” he said. “Especially with social media, in Spain they are more involved. There are journalists at training sessions. It’s the same but more intense.

“But the fact is the same…if you want to be a manager, accept it.”

Guardiola said Bruce must ignore the critics and focus on messages such as that which came from Newcastle forward Allan Saint-Maximin saying only those who actually knew the manager were in a position to comment.

“I read the post on Twitter from Saint-Maximin and this for me is what Steve Bruce is,” Guardiola said. “He is an exceptional gentleman who always took care of me so nicely when I came from Catalonia, a different country.

“I wish him all the best and I tell him, don’t pay much attention to all the comments because he knows it’s bull****.”

Guardiola will take his side to Brighton on Saturday to face a team flying high in fourth place.

Ten-man City suffered a 3-2 defeat at the AMEX last season a little over a week before the Champions League final.

The match finished with Guardiola confronting Graham Potter, who later apologised for overzealous celebrations, but he insisted that would have no bearing on Saturday’s game.

“I enjoy watching Brighton, they are an exceptional team,” Guardiola said. “Last season we were champions, we were preparing for the Champions League final, this season we’re fighting to be champions. I think they are the same.”

Guardiola used his press conference to send a message of support to Belgian-based City fan Guido De Pauw, 63, who remains in a coma after being the victim of an attack from rival supporters following the 5-1 Champions League win over Club Brugge on Tuesday.

Two suspects remain in custody with three others released on bail.

Guardiola appeared at his Friday press conference in a t-shirt which read: ‘We’re with you, Guido’, and said: “On behalf of all of the club, from our chairman Khaldoon [Al Mubarak], for him, we are quite optimistic.

“In the last hours he is getting better and of course he has all of the support from the club on what they need for the investigation.

“A big hug for him and all his family. We wish that soon he will come back to the Etihad Stadium.”