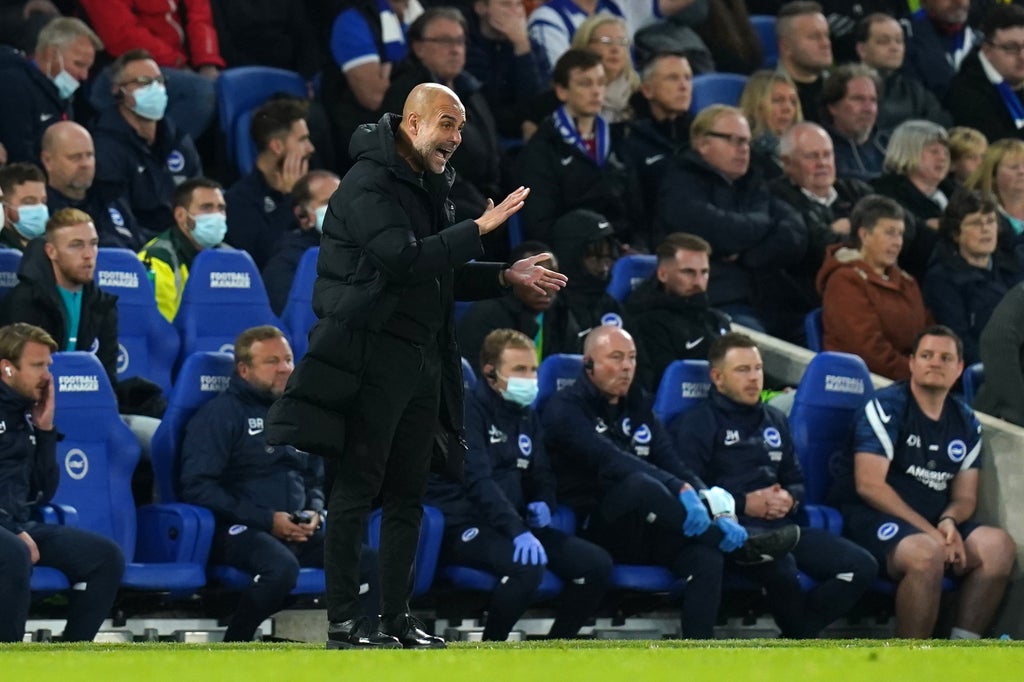 Pep Guardiola hailed Phil Foden after he starred in Manchester City’s win at Brighton which took them back to second in the Premier League.

The England international scored twice in a dominant first-half display at the AMEX Stadium after the recalled Ilkay Gundogan had broken the deadlock.

Brighton responded well after the break and deserved more than their consolation from the penalty spot from Alexis Mac Allister before Riyad Mahrez wrapped up the 4-1 win late on.

But it was Foden, who slotted home a Jack Grealish cross and unwittingly got a touch on a Gabriel Jesus strike for his second of the night, who drew praise from Guardiola.

“In the final third he can play up front, has the quality to move and be aggressive one on one and arrive in the box. He can play as a false nine, a winger, wide right or wide left.

“He is a guy who is a midfield player with a big sense of the goal. He is still young and still has a margin to improve.”

Foden himself was pleased to have weighed in with two goals as he enjoyed playing in a more central position than he has been accustomed to.

“I can drop deep and get the ball and pick the passes off. It’s a new role for me and I can say I’m really enjoying it.

“We are on a good run of form, but we just want to keep going now for the next games and keep that level.

“On another day I could have scored three, but the main thing is the result and I’m just happy we got it today.”

Guardiola also reiterated his belief that Brighton boss Graham Potter is the best English manager in the business.

The Seagulls rallied after being blown away in the first half and Potter was pleased with the reaction of his side.

“I was impressed with everybody in reference to the second half,” he said.

“I wouldn’t want to single anyone out, the first goal was soft from our perspective. I couldn’t have been more proud of the boys and what they gave.

“In the end we are disappointed to lose, we can’t say we deserved to get anything from the game but I was pleased with the second-half performance.”

Asked about Guardiola’s view on his standing in the game, Potter added: “Professionally he is the best in the world, what he has achieved is amazing and someone I am inspired by, it is nice of him to say that.”