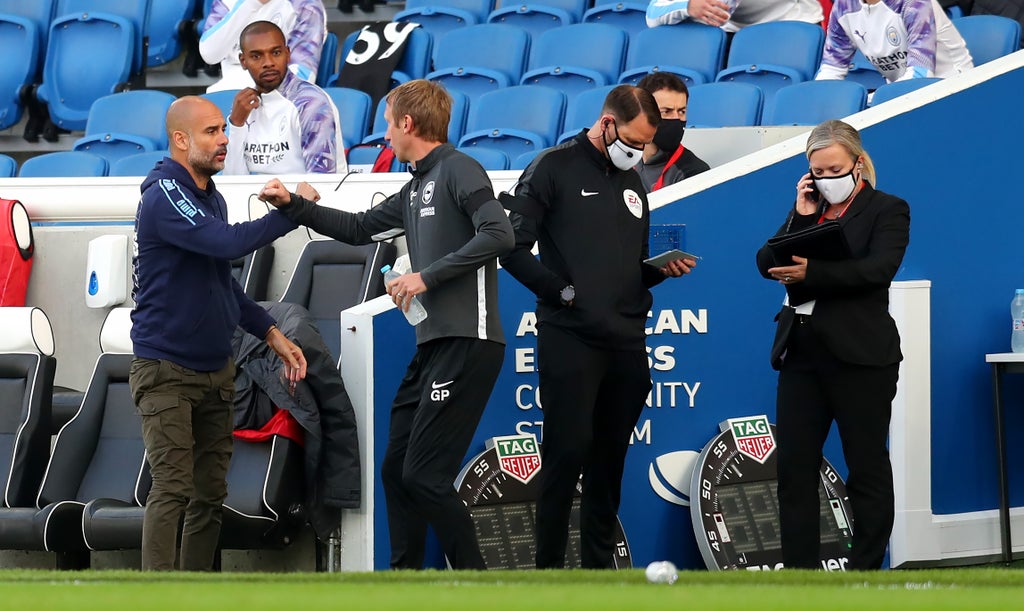 Pep Guardiola insists there will no thoughts of revenge in his head when he takes his Manchester City to Brighton on Saturday.

City blew a 2-0 lead to be beaten 3-2 at the Amex last season after having Joao Cancelo sent off just 10 minutes into the match, in which Guardiola confronted Brighton boss Graham Potter who subsequently apologised for some over-zealous celebrations of his side’s opening goal.

The defeat was a setback for City in the final weeks of their build-up to the Champions League final, but Guardiola said it had not been part of his thinking this week.

“Absolutely not,” he said when asked if it was on his mind.

Potter said this week he was sorry for the actions which so upset Guardiola on the south coast and that he hoped to get “a cuddle” from the City boss this time around.

The sight of Guardiola venting his frustration at Potter came only months after he had called the Brighton boss the best English manager in the country following City’s 1-0 win over Brighton at the Etihad Stadium.

That verdict is being borne out by Brighton’s superb start to the season – they will start the day fourth in the Premier League only two points behind Guardiola’s defending champions.

City fans may well be celebrating before kick-off as they head to the south coast, with Saturday marking the 10th anniversary of their famous 6-1 derby victory over Manchester United at Old Trafford.

The victory over Sir Alex Ferguson’s side laid down another significant marker in their evolution since the Abu Dhabi-backed takeover, and proved a critical moment in the first Premier League title which was won under Roberto Mancini.

Guardiola was still in charge of Barcelona at the time, but said it was a result which made him sit up and take notice.

“Definitely I remember it,” he said. “I didn’t watch it live, I knew the result and saw the highlights. When a team like City win like that at Old Trafford it’s a surprise, but it showed how good the team from Mancini has done and how they were, what excellent players they had.”